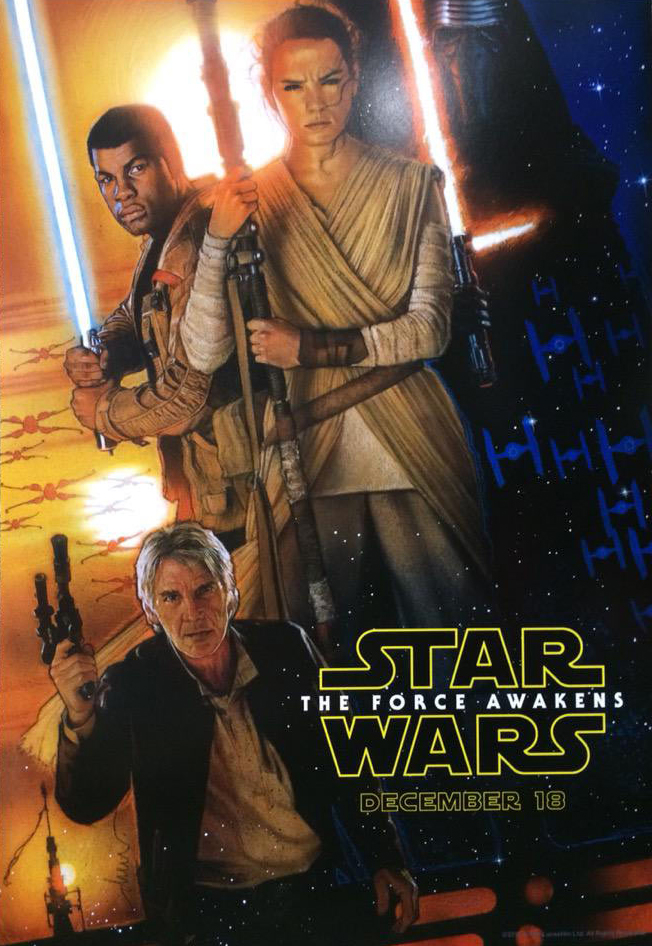 This is the spoiler filled review- if you are looking for the spoiler free review, go to the home page and find it now.

30 years have passed since the Return of the Jedi, and a lot has happened since. The hero of the story, Luke Skywalker (Mark Hamill), has gone missing, and everyone is looking for him. From the new threat in the universe, the First Order- a ruthless army with weapons that can level planets, and the Resistance- the remnants of the Republic now led by General Leia (Carrie Fisher). The person who has the first lead on Skywalker is one of the newest heroes to the franchise, Resistance pilot Poe Dameron (Oscar Isaac), with his trusty droid, BB-8. Before being taken by the First Order, with one of their leaders, Kylo Ren (Adam Driver), Poe stores the clue to Skywalker’s whereabouts inside BB-8 on the desert planet of Jakku, where it encounters a local to the planet, Rey (Daisy Ridley). This is where the movie kicks into gear, and doesn’t stop until the end.

First, let’s touch on how the new heroes and villains of the franchise did: my favorite out of the three new heroes has to be the pilot, Poe. A tough as nails, skilled pilot, Poe is a likable character- one you root for and want to see overcome the odds. I see Poe playing a huge part in the films to follow, because he shined in every scene he was in. Rey, of course, is pretty much the nexus of the film- after discovering she is strong with the force and has a mysterious past that ties her to Skywalker and Kylo Ren. Rey showed that lightsabers aren’t just for guys, as she had a tremendous final showdown with Ren. The last of the three new heroes is Finn (John Boyega), who has a pretty interesting backstory. Being a Stormtrooper in the First Order with only a code as a name, the newly christened “Finn” broke bad and realized he wasn’t a murderer when it came time to exterminate an entire village on Jakku. Finn is trying to find his place in this world, and by the end of the film, I feel he’s on the right path. Rey and Finn definitely have a connection, one that will undoubtedly grow in the future films.

Now, for the villains, starting with Kylo Ren. Ren, being the son of Han Solo and Princess Leia, turned to the dark side as part of Luke’s rebuilt Jedi Academy. Ren is, without a doubt, the most hated Star Wars character on the face of the planet right now, even more hated than Jar Jar Binks. Why? Well, this is the spoiler review, so I can say it: because he took his three pointed lightsaber and ran through the beloved Han Solo, his own father, ending the life of the iconic smuggler. Ren, following the lead of an evil in the shadows, Supreme Leader Snoke (Andy Serkis), is akin to a child- he has the powers and potential to become a villain as powerful as Darth Vader, but he lets his emotions get the best of him, as seen with his temper tantrums. Joining the First Order is General Hux (Domhnall Gleeson), one of the most annoying villains in the Star Wars universe, and Captain Phasma (Gwendoline Christie), who had slightly more screen time than another under-appreciated masked villain, Boba Fett from the original trilogy.

The story is one of discovery- for Rey, it’s discovering exactly who and what she is. For Finn, its discovering the courage inside of him to not only rebel against the First Order, but to go to war with them as well. For Ren, it’s a tale of discovery as well- trying to fight between the light and dark sides, and ultimately succumbing the dark side. But what about the returning heroes?

For Han Solo, the film brings closure to the character and the wild and crazy life he led. As we learn, he and Leia separated after their son went crazy, making Solo go back to what he does- lie, swindle and smuggle with his trusty friend, Chewbacca. Han has always been a “what about me?” character, save for key moments. With his encounter with Ren, it wasn’t the smuggler looking for a quick payday- it was a father trying to save his family; free of charge. I have heard “why did he go out like that?” or “he should have fought him”, but that’s the point. He was never going to fight his son- he was there to help his son however he could. He was there to be a dad.

The end of the film was powerful as well, as we see the long sought after Luke Skywalker, discovered by Rey with Luke’s old lightsaber in tow. Luke looks like a Jedi master now, and sets the stage for what is bound to be an amazing Episode VIII.

Now, for the negatives of the film- I feel that the over-hyped Captain Phasma did the equivalent of nothing in this film. Hopefully she survives her embarrassing defeat by a worn down Wookie and visit to a trash compactor. The small amount of screen time for the droid duo C-3PO and R2-D2 is another set back for me, but with so many new faces this time around, I completely understand why they had a smaller role.

The Force Awakens is a true successor for the Star Wars franchise. Yes, it is sad to see the loss of the beloved Han Solo, but it is exciting to see what the future holds- will Rey become a Jedi and strike down Ren and the Dark Side? Will Finn continue to grow as a person and continue to fight the good fight? Can Poe make the Kessel Run faster than Han? Will Luke face the all-powerful Snoke? I cannot wait for Episode VIII, and I am not alone.