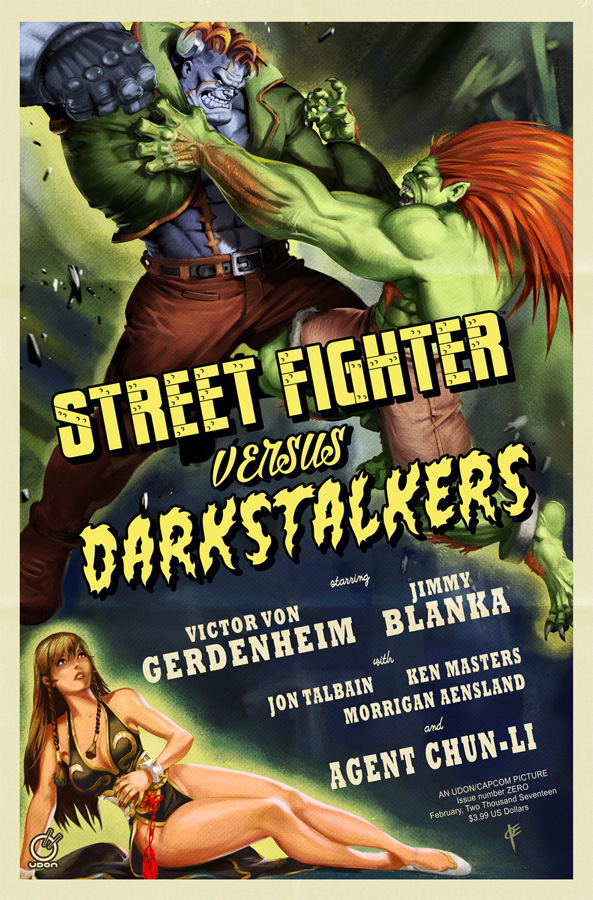 Udon takes two of Capcom’s storied franchises and weaves them together seamlessly in Street Fighter Vs. Darkstalkers

When thinking about fighting game franchises, you can’t go through the top 10 with mentioning two of Capcom’s best fighters: Street Fighter and Darkstalkers. One has warriors from around the world, each fighting for their own motives, and one has monsters and demons from across the realms, each rich with their own history. Thanks to UDON Entertainment, we get to see these worlds collide in Street Fighter Vs. Darkstalkers, which kicks off with a zero issue.

After reading this issue, all I can say is: it’s about time.

Written by Matt Moylan with artwork by Hanzo Steinbach and letters by Marshall Dillion, this #0 issue sets up the meeting of these two worlds perfectly. We get to see a new alliance between the demonic Jedah and the crazy powerful Gill, and how bloody good that combined force is. We also see a new face from the Street Fighter V entry, Rashid, as he and his comrade Azam go in search of the Tomb of Anakaris, the slow moving pharaoh monster from Darkstalkers. We also see an appearance by the ever popular succubus Lilith, who ties together Rashid’s romp in the desert to Jedah and Gill’s plans.

The issue reads and looks fantastic. I always loved how the Darkstalkers game looked like a cartoon came to life; this book has the same feeling, just beyond any graphics we ever saw as a Darkstalkers game. Everything here worked seamlessly, so much so that it feels like these two universes deserve to be tied together from here on out. Steinbach’s artwork is simply amazing, and coined with Moylan’s action packed and smart script, it makes for the perfect combo. Also, I have to give a shout out to Rashid’s “aliens” homage, expertly done!

This is a fantastic first issue for the series, which leads into the #1 issue with a bang. Street Fighter Vs Darkstalkers #0 is every fighting game fans dream come true- unless that dream is Clay Fighters, then you are simply out of luck. This debut issue sets the chess board perfectly: it’s time for the game to begin.