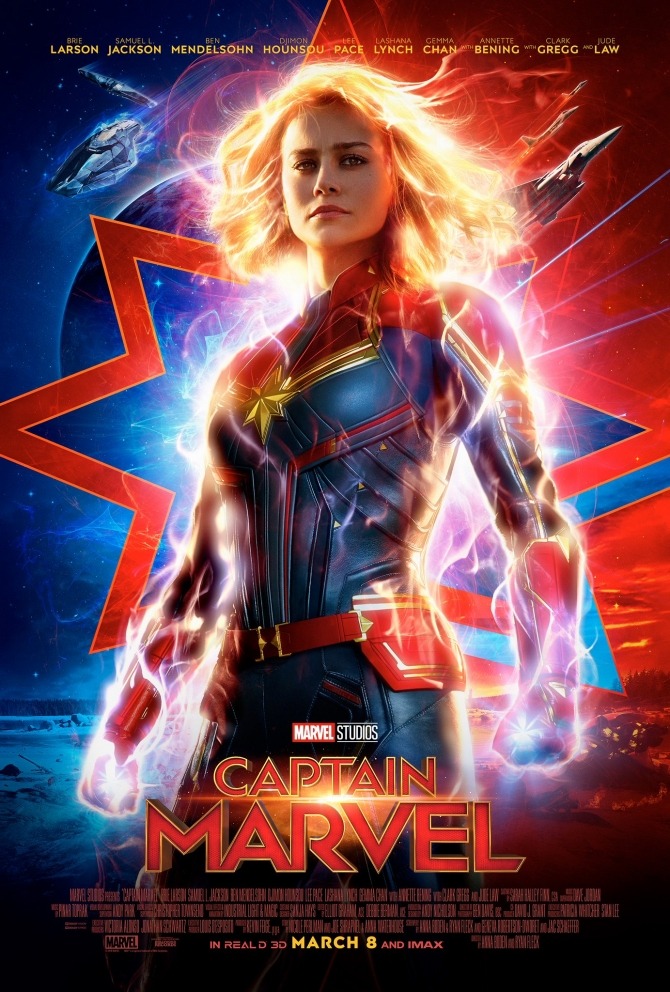 It is easily one of the most anticipated movies of 2019. The first female lead superhero movie in the Marvel Cinematic Universe. The tipping point as we head towards Avengers: End Game. Captain Marvel is here, but does the film shine bright like it’s comic book counterpart, or is it more of a falling star than a supernova?

Directed by Anna Boden and Ryan Fleck, the film stars Brie Larson as Carol Danvers; the Air Force pilot turn Kree soldier turned Earth’s hero. The story dives right into the thick of it, with a somewhat amnesic Carol, going by the name of Vers,  serving as one of the Kree’s Starforce on the planet Hala. Guided by her mentor of sorts, Yon-Rogg (Jude Law), Vers ends up on Earth after an ambush by the Skrulls, a shape-shifting alien race at war with the Kree. After being taken by the Skrulls, Vers heads to Earth to secure the hyperspace engine that the Skrulls seek, but all is not what it seems. She starts getting flashbacks of the past and is set on a collision course with S.H.I.E.L.D. Agent Nick Fury (Samuel L. Jackson), and with the leader of the Skrulls on Earth, Talos (Ben Mendelsohn).

We see how Carol connects to the already established Marvel Cinematic Universe (MCU), as she has quite an impact on Earth’s Mightiest Heroes whether they know it or not. We also see the introduction of the Skrulls, a primary alien race in the comic book source material. We do see an origin story for Carol and how she gained her abilities, and how Dr. Lawson on Earth (Annette Bening) plays a far more significant role in the Captain Marvel mythos than initially believed. We also see the strong bond between Carol and her friend Maria (Lashana Lynch), a relationship that proves stronger than the issues Carol is facing. It is an excellent introduction into Captain Marvel’s world with a cinematic spin to it.

But the movie is not perfect and does not fall into the category of my favorite MCU movies, but at the same time, I do not have disdain for it as I do for say, Iron Man 3. The movie flows a little oddly, and the buildup doesn’t seem as meaningful as other Marvel films, like Black Panther and Thor: Ragnarok in comparison.  Larson does a fantastic job as Captain Marvel, but the story and structure just aren’t as strong as the hero. The swerve with the opposing force to Carol was well done, but when you have a hero as overpowered as Carol, it is hard to make someone or something feel like a legitimate threat. For me, the end felt like if you put a cheat code in a video game and suddenly you have unlimited ammo and invincibility. Sure, it’s fun, but the win doesn’t feel earned as any threat feels like a walk in the park. The absence of true fear of danger or death stops Captain Marvel from shining as bright as it could. A hero is only as good as their villain, and in this film, no villain rose to the occasion to match Marvel’s powers or personal strength.

Captain Marvel is a good movie, do not listen to any critics on their opinions, mine included. See the film for yourself, experience it, and then draw your conclusions. I feel like Captain Marvel will take center stage when it comes to Avengers: Endgame and moving forward to the next phase of MCU films. Larson portrays an absolute hero, and maybe going against the Mad Titan Thanos will cement her as one of the premiere heroes in the MCU.