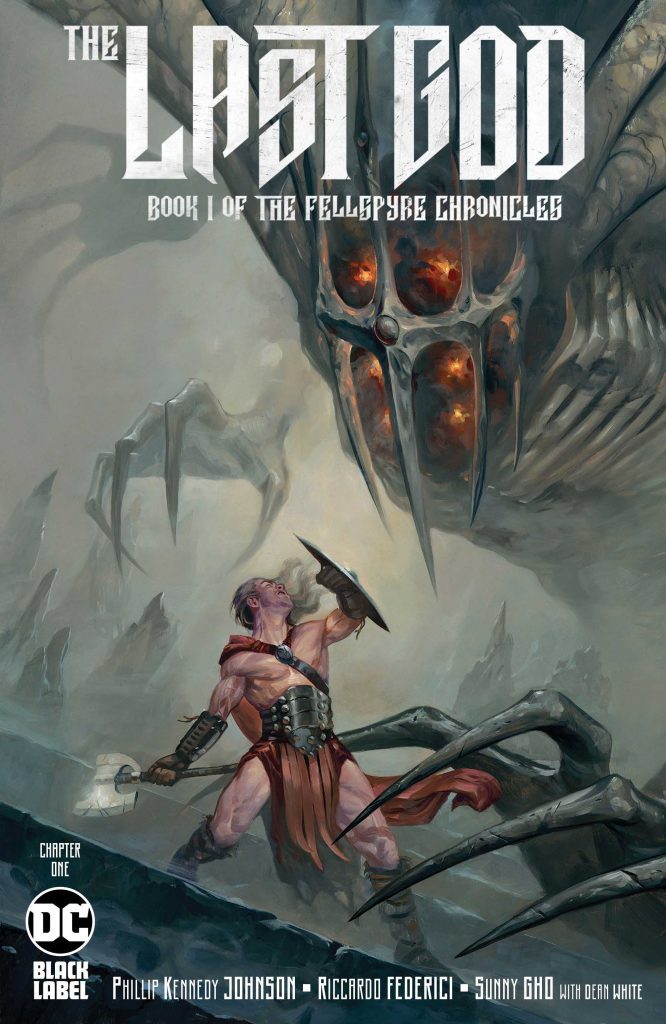 DC Comics Black Label has brought us some fantastic, mature readers stories featuring Batman, Harley Quinn, Joker, and more. With The Last God, we get a book that takes the wonders of a mystical old world and infuses it with elements of pure horror. Talk about a recipe for success.

From Phillip Kennedy Johnson, with art by Riccardo Federici, Sunny Gho, Dean White, Tom Napolitano, Steve Wands, and a beautiful cover by Kai Carpenter, the book assembles quite the team. They even have a cartographer, Jared Blando.

The story takes place in Cain Anuun, a mythical place of swords and sorcery. We learn of the story of the black stairs, and the Gods that resided there: terrifying monsters that met their end by the Godslayers, led by King Tyr. Banishing the evil and ruling as the mythic Godslayer, the past comes back for Tyr when it seems the Gods have come back. How did Tyr defeat the Gods back then, and at what cost? And what of Eyvindr? A gladiator that has won enough battle to earn his freedom but is turned away by the queen. What role does he play in the incoming fight?

This book is amazing. From a story that seems to transcend time, to a hero with a secret and another hero that emerges from the blood of battle, we have a lot going on. I am blown away by how much planning, how much detail has gone into building this world. When you reach the end of the book, you will see the beautiful map created for Cain Anuun; it is a sight to behold. I want a copy of it on my wall; it looks that amazing. The artwork here is so great- I love the designs of the Gods, the heroes, the emotion captured in the faces- it is the complete package. The colors here really bring this world to life and transport you to a place that you wouldn’t want to wake up to in the morning.

I had a good feeling about The Last God from the solicits and covers, and I was right. This DC Black Label book might be the most important release from the imprint yet, as it is a brand new story, no pre-existing heroes or characters. Just a fantastic story and mind-blowing artwork. Being a Black Label book, it is for sure for mature readers, but it is such a treat. DC has me hooked with The Last God. Give it a shot, you won’t be disappointed.

Tags: The Last God #1 Review: The Past Won't Die