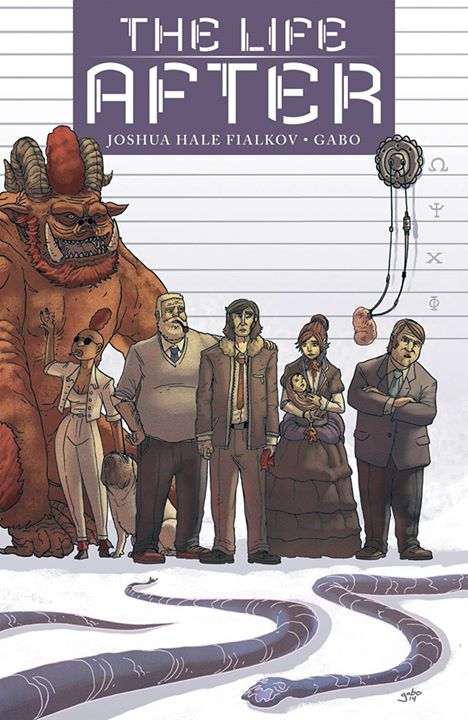 (Victorville, CA)—What comes after the bell rings? When its all said and done, what exactly does the afterlife look like? If it looks anything like Oni Press’s The Life After, then we are all in for one hell of a surprise.

Oni Press brings the first five issues collected into one trade paperback of Joshua Hale Fialkov’s and Gabo’s mature readers story of the here after. The story focuses on Jude- a guy with a normal, boring life, a normal, boring routine, and he is content with that. But after finally taking a chance on meeting a mysterious woman on the bus, Jude realizes this isn’t life- he has somehow ended up in the purgatory for suicides. How? No clue. When he makes contact with people, he sees how their life ended in brutal fashion, but has no clue how. But the further he goes into the world, the stranger it all becomes… like the appearance of the one person who seems to know what’s going on, and he happens to be the famous author, Ernest Hemingway.

Yeah, Hemingway… in a comic book, and as an integral part of it. Let that sit in for a moment.

In the background, we see the interworking’s of the after life, which seems to run a lot like corporate America- complete with middlemen, tech support and negotiations. Everyone is scrambling to figure out Jude, who he is and how he can do what he does. Hemingway becomes his only ally in this world, as Heaven and Hell both try to fix it all before the system falls into shambles.

Fialkov has created some of the most interesting and original books I’ve read; his book Echoes creeped me out like I have never been creeped out before from a comic book, and was fantastic doing so. With The Life After, Fialkov explores the afterlife, a subject I can’t get enough of. It’s disturbing, thought provoking and just plain insane. You really care about everyman Jude, and his bearded buddy Hemingway. Artist Gabo creates a world that matches Fialkov’s take on Heaven, Hell and everything in between. We see demons, angels, and, of course, potatoes, which I won’t go into at all. Gabo creates the perfect landscape for this book, making every brutal detail pop out on the page.

I have been meaning to review this trade paperback for awhile now, because it struck me as being something totally different from most of the books on the shelves today. Fialkov and Gabo have delivered an amazing, disturbing look at the afterlife, a look that is bound to turn a few heads and open some eyes. I wholeheartedly believe that The Life After is one of the best books to hit in recent memory, and this trade is your entry to his wild ride, for a price of admission of only $9.99. I give The Life After Volume 1 a perfect @@@@@ out of FIVE. I’ve never seen Hemingway kick so much ass, and I never thought I would ever type that sentence, either.