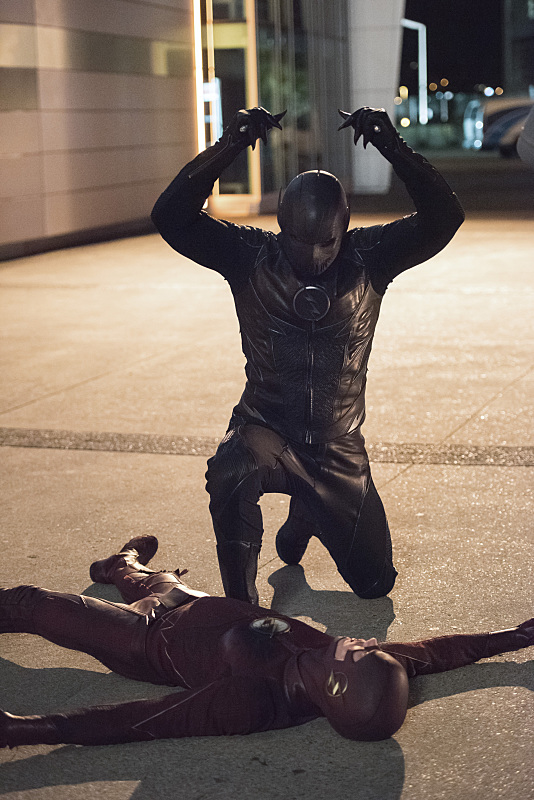 (Victor Valley)– Did that just happen!? There are several shows that are defined by the most shocking and abrupt moments that change the direction of the narrative and leave the series changed afterwards. 2015 had no shortage of these moments. From Central City to the Seven Kingdoms, shock and awe filled the screens of televisions all over the world.

While there are many more stunning moments to come in 2016 with the Flash’s upcoming rematch with Zoom and a major character death on Arrow, 2015 had several jaw-dropping moments from our favorite TV shows. These are the moments that left fans horrified and wanting more in 2015.

There were several moments in The Flash’s freshman and sophomore seasons that shocked fans. The CW’s premiere superhero show has taken fans through time and all the way to a parallel world in 2015. From Eddie’s ultimate sacrifice to Jay Garrick’s appearance at STAR Labs, Team Flash has had their share of jaw-dropping moments this year.

With that, the most stunning moment of the year came from Barry’s first showdown with the second season’s primary villain Zoom. Instantly regretting drawing the mysterious dark speedster into battle, Barry finds himself on the receiving end of a one-sided beating. After breaking the Flash’s back and knocking him out, Zoom adds insult to injury by dragging Barry around town and showing off his broken body to the police, the newspaper, and the public.

It was not the fact that Barry lost the fight (he has been known to lose one here and there) that made this moment so surreal for fans. It was the manner in which he lost. The Flash was not only way out of his league, but he was humiliated during the fight and in front of his entire city (and fans everywhere).

When Jerome was introduced in the first season, he was meant to be a possible future Joker for fans to speculate about. After his defeat and subsequent commitment in Arkham, he was mostly forgotten about while the inaugural season finished up. Come Fall 2015, all of that changed.

Having been broken out of Arkham by Theo Galavan (along with a vicious group of psychopaths), Jerome let loose his unique brand of insanity to terrorize the city. While throwing people off of a roof in order to spell out the name of his new villainous squad was an eye-popping moment, the even bigger shock came when Jerome and company visited the Gotham police station.

Using Barbara to lure Gordon out of the station, Jerome enters and sprays the station with gunfire and kills several cops. After sharing a Joker-esque laugh with the camera, he then murders Gordon’s only ally in the department leadership, Sarah Essen. Not only does Jerome laugh his way through this brazen assault, but he also gets away while leaving James Gordon and viewers stunned at the level of carnage.

Game of Thrones: Man Down At The Wall

For most of the fifth season of HBO’s premiere drama, Kit Harrington’s Jon Snow was leading the Knights Watch and fighting White Walkers. Having earned the respect of his brothers in black during his short tenure on the wall, Jon was elected the new Lord Commander and immediately made enemies of his brothers with his first leadership decision.

Using the Knight’s Watch to escort Wildlings south of the Wall did not sit well with many of his brothers who had lost friends and family to the Northerners. After surviving an intense battle with the White Walkers, Snow returns to Castle Black amid his angry followers.

Deciding that his treason cannot stand, his “brothers” trick him into meeting them at the Wall with the promise of news about his missing uncle. Once there, Jon is called a traitor and stabbed repeatedly. Falling into a puddle of his own blood in the snow, the stunned look in his eyes matched the shock and horror that views felt as the fan favorite lay bleeding to death with no hope of learning his fate until the following year.

Marvel’s Agents of SHIELD: The Simmons in the Stone

Agents of SHIELD (AOS) has been a bit of a mixed bag from the series beginning. Following a slow start, AOS kicked into high gear when it shadowed the events of Captain America: The Winter Soldier. With HYDRA growing within their organization the entire time (and teammate Grant Ward betraying them for the sinister organization), the SHIELD agents became fugitives and had to start over from scratch.

With the second season focusing on Chloe Bennet’s Daisy Johnson learning about her new powers and the underground organization of Inhumans, AOS was set to excite fans for another year. While the super powered mayhem that ensued from the Terrigen Crystals was entertaining to watch, the most shocking moment did not come from a super battle.

Instead, the moment that left fans jaws on the floor (and made me rewind the DVR several times) was at the very end of the season finale. Having finally set up a date with Fitz after a long and platonic relationship, a happy Simmons is suddenly swallowed by the large stone that SHIELD is researching. Going briefly from solid to liquid and solid again, the stone steals Simmons away from her developing relationship in truly Wheadon-esque fashion, leaving lovesick fans shocked and horrified.

The unexpected death of a major character (especially one that has been there since the beginning) is always a shocking moment in a series. While characters die in almost every episode of post-apocalyptic zombie series, when a core character bites the dust it raises the eyebrows of people around the world.

With the focus of the series shifting to the sheltered community of Alexandria, fans had the expectation that Rick and his band of survivors would be safe and able to begin normal lives. Things never end up working out that way. From the beginning, there was quite a bit of drama between Rick’s group and the citizens of Alexandria. This boiled over into Glen’s first brush with death last year when he and Nicholas fought when he attempted to kill Glenn.

After Glenn covered for Nicholas and hid their fight from the rest of the group, it appeared that Glenn took him under his wing and was determined to help him learn to survive. This apprenticeship reached its conclusion when the two are trapped on top of a dumpster and surrounded by walkers. Instead of trying to find a way out, Nicholas fires the shot heard round the world. Shooting himself in the head, he falls into Glenn and knocks him into the army of zombies. The internet then exploded as the last sight seen before the episode ends is Glenn screaming and it appears he is being torn to shreds.

Doctor Who has taken the titular Doctor to some dark places in recent years. As he has lost companions, he has gone into deep depression (mourning Rose in “The Runaway Bride” and Amy and Rory in “The Snowmen”), but this time was different.

Fans knew that this would be Jenna Coleman’s final season on the show. The only mystery was how her character would exit the series. Most people thought she would make it to the season finale and either die or stay behind to live her life as a school teacher. While it was surprising that she died as a result of the raven, it did not stun the world as she was expected to leave anyway. What shocked fans around the world is what the Doctor did next.

Unlike his previous companions, the Doctor would not accept Clara’s death. Spending billions of years punching through a diamond wall, he finally makes his way to his long lost home world. Tossing aside the rules of time travel that he always follows (for the most part), he pulls Clara from the moment before her death and attempts to fly away with her. While pulling her from her timeline could destroy the entire time continuum, he is determined to save her anyway. Shooting a Gallifreyan general during his escape attempt (and forcing his regeneration) with Clara, he crosses a line that fans have never seen him cross. While it has always been just below the surface, the fury of the Time Lord is put on full display and it was a terrifying sight for Whovians around the world.