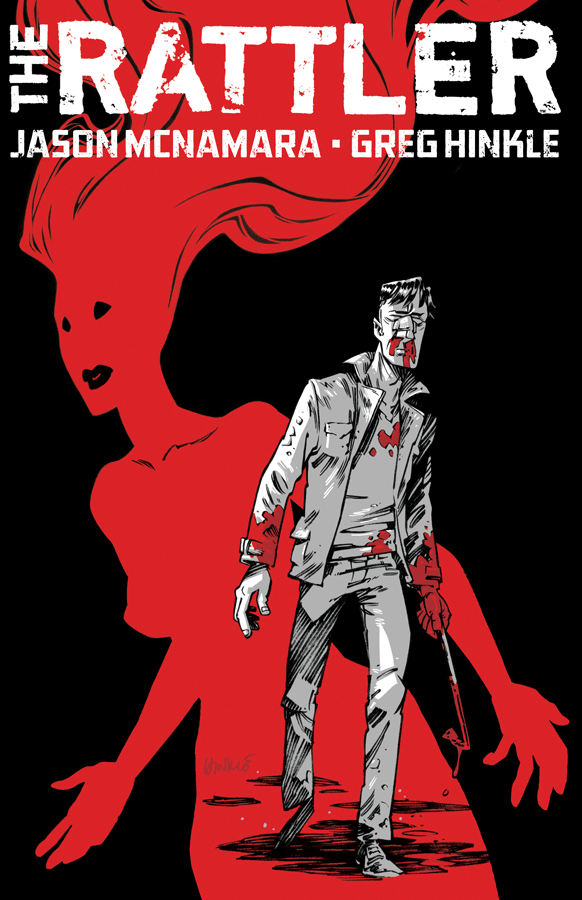 The Rattler is a Non Stop Thriller in Sequential Art

(Victor Valley)– When I decided to finally check out The Rattler- I’ll admit, I didn’t really have a clue what the book was about. I had heard rumblings of it off the internet, and then I received word that Image Comics would be publishing it. But what is it about? With a name like The Rattler, I imagined something about the desert, snakes and things of that nature, which sounded like it would be a good read.

What I got was a story full of so many twists and turns, that by the end of this original graphic novel, all I could say was: wow.

Written by Jason McNamara with art by Greg Hinkle, The Rattler follows Stephen Thorn, an author hell-bent on finding his wife. It was 10 years back that the couple’s car died out on a lonely road in the desert, only to be ‘saved’ by a tow truck passing, driven by an unsightly woman. Instead of simply towing the car, the tow truck takes off with both the car and Stephen’s wife, leaving the man stranded, hopeless and all alone. Since then, Stephen has become a world-renowned author, creating books about his ordeal, all the while keeping the hope alive that his wife is still alive.

Things take a turn for the worst, and weird, when Stephen begins to hear his wife calling for him from a very unlikely place- namely, a corpse. This sets our hero off on a bizarre race to find his soul mate, all while delving deeper into a world of lies and death. With each step Stephen takes, he goes further and further away from his own humanity, and as the death toll rises, the stakes grow to unbelievable heights. By the end of the book, you will be left speechless, much like I was.

McNamara has crafted a story that is eerie, brutal and unforgiving. His story flows so nicely, so cinematically, that I feel it is only a matter of time before we see this book optioned for the silver screen. Hinkle’s artwork is absolutely a work of art to behold- his stark, black, white and grey illustrations, splashed with red ink to bring out the blood in his scenes, gives the book a very noir feel to it, and harkens back to Frank Miller’s Sin City.

The Rattler caught me by surprise- this is a hard-hitting, no punches pulled story of a man on the edge. If there was ever a time to use the term “page turner”, this is it. I couldn’t wait to flip to the next page to see what’s in store for Stephen at every turn. The Rattler is easily one of the best graphic novels to be released in 2016 so far.