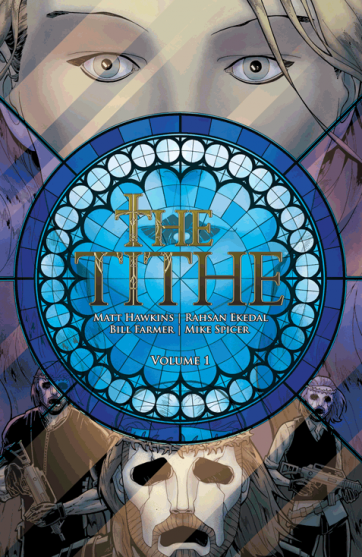 Is it wrong to steal from a thief? Is one theft worse than another? These interesting moral dilemmas are posed and debated in The Tithe Volume 1.

When a series of mega-churches are robbed by an online hacker called Samaritan, the FBI takes notice and sends a team to investigate. Stepping up their offensive, Samaritan physically robs a corrupt church in California and exposes the pastor to his parishioners as a thief and a womanizer. While there are several in the FBI that feel Samaritan should not be pursued, the two-man team assigned to them has strict orders to stop them before they rob another church.

As the story develops, it is seen that Samaritan has been directly contacting one of the FBI team members and has been giving them evidence against all of the churches and pastors that they have stolen from. Only attacking churches that are corrupt, Samaritan is seen by many as a modern day Robin Hood (because they give their stolen money to charities that help people).

The artist does a great job fleshing out the characters and the colorists bring the story to life with amazing looking tones and backgrounds.

While the creators tell an intriguing and fascinating heist story that keeps the reader turning the pages, the narrative hits a road block when it delves into social commentary. With several jabs against Christians (calling church-goers “Sheeple”) that give the impression that pastors are crooks and parishioners are gullible fools, The Tithe alienates a large portion of potential readers by making a strong effort to offend them.

Overall, this is a strong and compelling story that is visually appealing and leaves the reader counting down the days until Volume 2 is released. Unfortunately, by insulting a large swath of potential fans, The Tithe may end up scaring off too many readers with its unashamed views on religion.