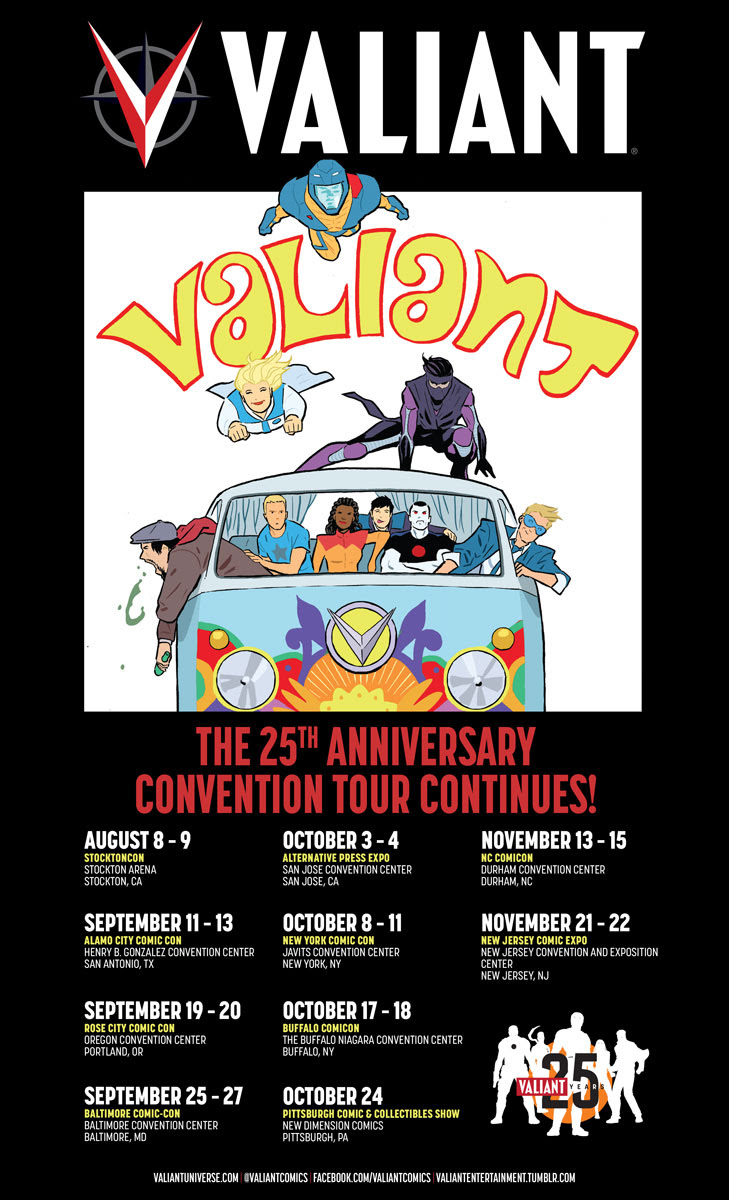 Valiant is proud to announce an all-new series of dates for the Valiant 25th Anniversary Convention Tour – extending Valiant’s year-long celebration of 25 years of the largest independent universe in comics with new appearances in cities across the country! Kicking off at StocktonCon 2015 in Stockton, CA on August 8th, the next leg of Valiant’s comic book roadshow will be coming soon to fans at Alamo City Comic Con 2015 in San Antonio, TX, Rose City Comic Con 2015 in Portland, OR, Baltimore Comic Con 2015 in Baltimore, MD, and New York Comic Con 2015 in New York, NY…with many more major appearances anywhere and everywhere in between!
With exclusive convention-only swag and giveaways, creator signings, panels and programming, and more, get the inside track on what’s next for Valiant’s award-winning superhero universe at a convention near you! From DIVINITY to BOOK OF DEATH and BLOODSHOT REBORN to WRATH OF THE ETERNAL WARRIOR, Valiant is bringing its biggest, best and brightest to fans across the country, beginning this August:
Saturday, August 8th – Sunday, August 9th:
StocktonCon
Stockton Arena
Stockton, CA

The second leg of the Valiant 25th Anniversary Convention Tour officially kicks off next week at StocktonCon 2015 in Stockton, CA – and we’re bringing a boatload of giveaways and merchandise to kick things off! From Saturday, August 8th through Sunday, August 9th, join Valiant at Booth #45/46 inside the Stockton Arena and find out why Valiant is the best reviewed publisher in comics today with a complete collection of volume one trade paperbacks – each intro-priced at just $9.99!
Check out Valiant’s acclaimed ongoing and limited series with trade paperback collections from the most nominated publisher of the 2015 Harvey Awards with nominated titles including THE VALIANT and THE DEATH-DEFYING DOCTOR MIRAGE. Plus, jump on board Valiant’s latest sold-out series with BOOK OF DEATH, DIVINITY, BLOODSHOT REBORN, and more – available at the Valiant booth all weekend long.
The Valiant 25th Anniversary Convention Tour rides again this August at StocktonCon 2015! Visit ValiantUniverse.com for more details and dates as Valiant’s silver anniversary celebration continues!
For more information, visit Valiant on Facebook, Twitter, Tumblr, and at ValiantUniverse.com.
For Valiant merchandise and more, visit ValiantStore.com.