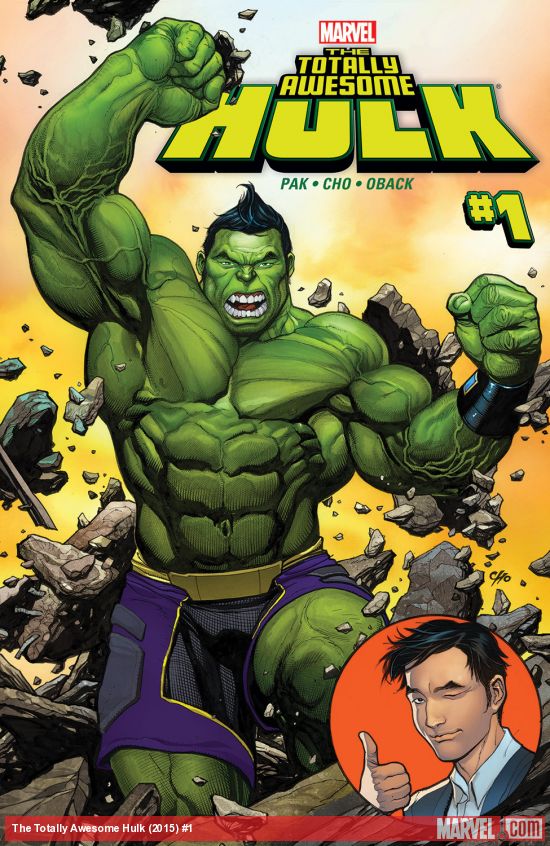 (Victor Valley)—The incredible Hulk is one of the most iconic characters in comic book history- the green goliath birthed from the rage of mild mannered Dr. Bruce Banner has been a staple at the house of ideas for decades. With The Totally Awesome Hulk, we see a massive change in the book, as Bruce Banner is no longer the Hulk. Will this change in character quiet the raging beast

Written by Greg Pak, no stranger to the Hulk, having written many Hulk stories, including the modern classic World War Hulk, we see a far different take on the jade giant. Gone is the tragic past of Bruce Banner- we now enter a different age, where the Hulk is actually the young Amadeus Cho, one of the smartest people on the planet. The big difference here? Cho actually wants to be the Hulk- you can tell right from the get go as he takes on a mutated turtle on a populated beach. Aided by his younger sister, Cho is tracking down these mutated animals, trying to find the cause of it all- what he finds is something (someone) far more dangerous than he has ever faced with Lady Hellbender

Frank Cho, who most recently worked on the covers for the Marvel series, Where Monsters Dwell, provides the art for the book. Cho’s art has a vibrant, animated feel to it, one that fits this title perfectly. Cho is known for his monsters and beautiful women, both which we see with this all-different Hulk. I couldn’t think of a better fit for this book than Cho.

This book is a fun start to what is bound to be an enjoyable series. Amadeus isn’t as likable as Banner was, not yet anyways, but it is fun to see this brash genius dive head first into battle, using his fists rather than his brains. The Totally Awesome Hulk is just that- totally awesome. As the series continues on, I think the title can go from awesome to sheer greatness.