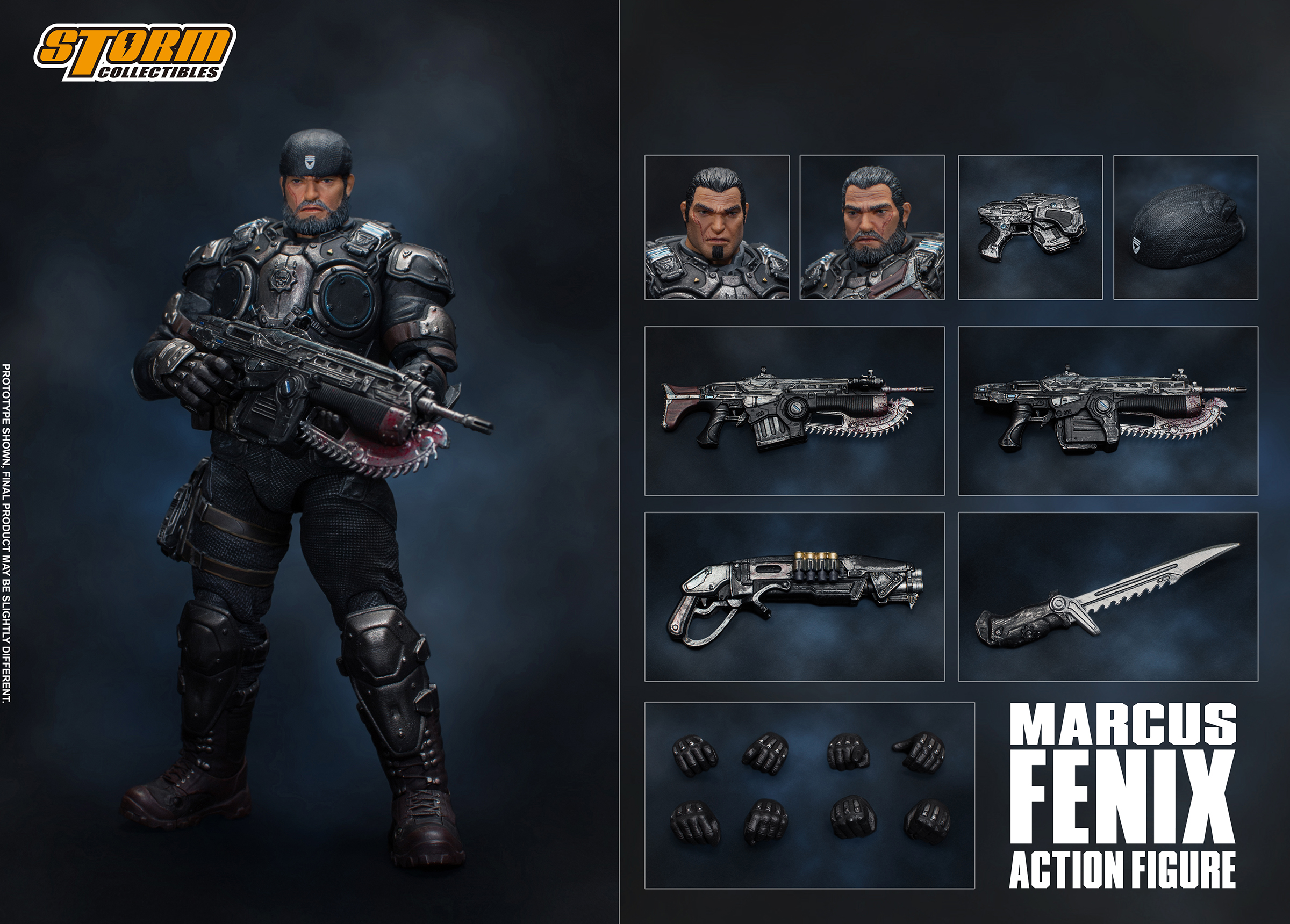 Bluefin, a Bandai Namco group company and the leading North American distributor of toys, collectibles, and hobby merchandise from Japan and Asia, proudly announces a new action figure product line it will carry from Storm Collectibles as it opens pre-orders for “Gears of War.”

A pair of officially licensed new 1/12 scale figures for Marcus Fenix and Augustus Cole will launch the new Storm Collectibles’ line based on the smash hit Gears of War video games. The figures will be available this summer from authorized Bluefin retailers nationwide and also from a variety of leading online outlets. Pre-orders are available now.

Bluefin also announces a special Gears of War figure variant of Marcus Fenix that will be offered exclusively by Game Stop in June. The “Vintage” Marcus Fenix features alternate armor with different paint and additional weapon accessories that include a fragmentation grenade. Game Stop pre-orders for the limited edition figure are available now.

The Gears of War Marcus Fenix and Augustus Cole figures will be unveiled for the first time in Bluefin’s booth at the 2019 Toy Fair in New York City. 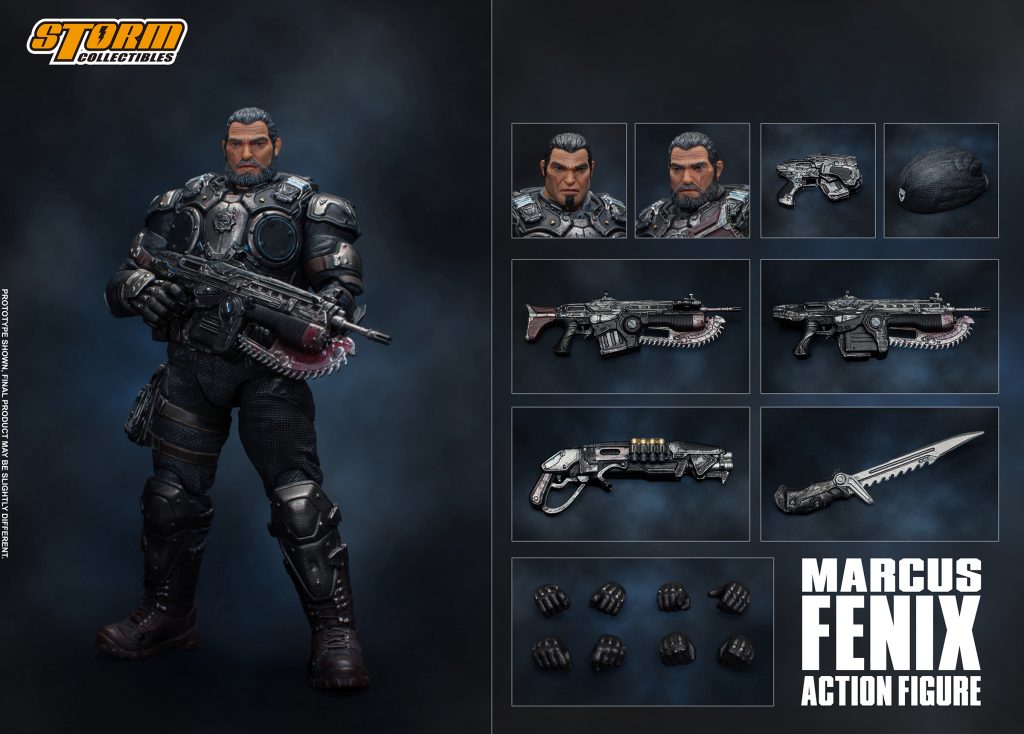 Based on the best-selling video game franchise, Gears of War – Sergeant Marcus Fenix is a Gear within the Coalition of Ordered Governments and leader of Delta Squad. Focused, strong and determined, he’s a natural leader who keeps his problems to himself and continually puts his life on the line for others. Having led humanity’s fight against the Locust Horde 25 years earlier, Marcus, now a decorated war hero has withdrawn from the public eye. With the appearance of the Swarm, Marcus must take up arms once again in a new fight against this terrifying new enemy. Marcus Fenix is fully articulated with over 30 points of articulation and has an incredible likeness to his video game counterpart.

The figure comes 2 interchangeable head sculpts and 4 hand accessories and is equipped with an arsenal of weapon accessories including a pair of custom lancers, a Gnasher, snub pistol and Dominic Santiago Commando Knife.

A special variant figure will be available exclusively through Game Stop. The “Vintage” Marcus Fenix features an alternate armor variant with different paint and additional weapon accessories that include a fragmentation grenade. 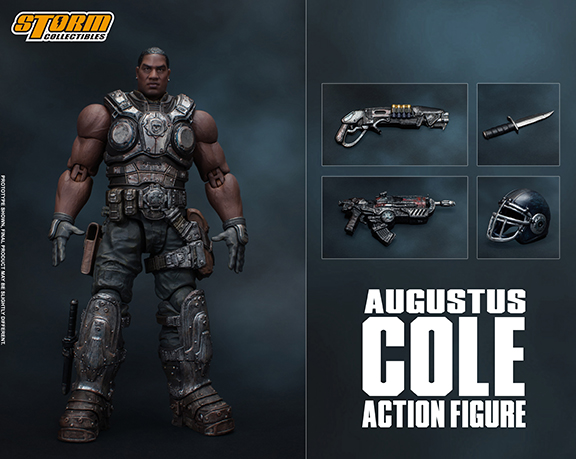 Based on the best-selling video game franchise, Gears of War – Private Augustus Cole, a.k.a “The Cole Train”, is an adrenaline junkie and former professional Thrashball player who gave up his comfortable sports career to enlist in the COG army after Emergence Day. Cole is charismatic, confident, and enthusiastic about everything. He craves action and as a member of Delta Squad, prefers to take the most direct path to the Locust Horde in any situation.  Cole is supremely confident in his ability to overcome anything, regardless of the odds, and he hasn’t been proven wrong yet. Augustus Cole is fully articulated with over 30 points of articulation and has an incredible likeness to his video game counterpart.

Gears of War is an award winning and bestselling science fiction action video game that were developed by Epic Games and published by Microsoft Game Studios. The trilogy of games and a prequel that currently compose the series take place on the planet Sera focuses on the conflict between humanity, the subterranean reptilian hominids known as the Locust Horde, and their mutated counterparts, the Lambent & the Swarm. The franchise consists of five third-person shooter video games, which has also been supplemented by a comic book series and five novels.

Bluefin is a leading master and channel distributor of Japanese toys, collectibles, novelty and hobby products. The company’s extensive product line features a diverse and continually expanding catalog of high quality and popular collectibles from Asia. As a Bandai Namco group company, Bluefin distributes products in the U.S. for Bandai Tamashii Nations, Hobby and Shokugan. The company’s array of brand offerings also includes products from Storm Collectibles, Mr. Hobby/GSI, SEN-TI-NEL and Flame Toys, for which the company is the North American exclusive distributor. Bluefin is also the official North American consumer products and retail development partner for Studio Ghibli. Additional company information is available at: https://bluefinbrands.com/.