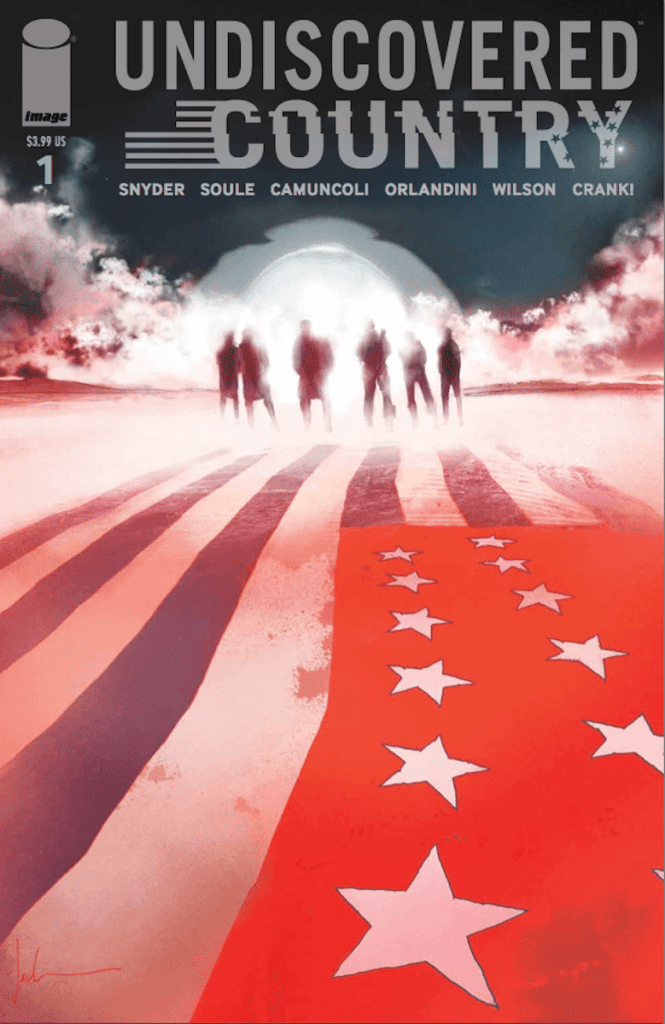 This is one of the most anticipated releases of the year when it comes to comic books. Scott Snyder, the man behind Wytches, A.D. After Death and one of the best Batman writers I have seen, has come together with one of my personal favorites, Charles Soule (27. Curse Words) to give us one of the most important books of the year with Image Comics Undiscovered Country.

Featuring amazing art by Giuseppe Camuncoli, Daniele Orlandini, and Matt Wilson, the book sends us into the not too distant future, where the sky is literally falling from the Sky Virus and the United States has walled itself off from the world for the past 30 years. So when a message comes through from the U.S., requesting a meeting with the other nations as the U.S. supposedly has the cure for the Sky Virus, things get crazy and fast. Once the team crosses over to the walled off U.S.A., they see that the once proud nation has become more of a psychedelic nightmare.

The story is paced extremely well, with enough shocks and turns to leave readers on edge. The artwork is amazing, especially once we see what is behind the wall. Such insane designs, such madness- it is awesome to behold. Image Comics has the makings of another hit here, but I think the world already knew that.

Without giving away too much in the review, I will say that Snyder and Soule have crafted an introduction that has readers’ minds racing. From the crazy map we see of the new United States to the opposition the team faces, I am blown away by what this story brings. I honestly didn’t expect so much to happen so fast, but it has me hooked for sure. With a story that tugs at the strings of our current political reality and ramps it up to 112, Undiscovered Country shows that the hype is real. God Bless the U.S. of A.