Valiant’s Absurd Dynamic Duo Quantum and Woody are Back!

As first revealed at Comic Book Resources, Valiant sure seems proud of itself to announce THE MOST VARIANT COVER OF ALL TIME! – an unholy and experimental combination of comic book history’s most noted, notorious, and obnoxious cover gimmicks – chromium, lenticular, embossing, die-cutting, iridescent ink, and more – onto one highly limited, meticulously crafted edition of December’s QUANTUM AND WOODY! (2017) #1!

In honor of the FIRST ISSUE of the ALL-NEW and UNTRUSTWORTHY ONGOING SERIES from rising star Daniel Kibblesmith (The Late Show with Stephen Colbert) and explosive artist Kano (Daredevil), Valiant is COMBINING AT LEAST EIGHT OF THE MOST POPULAR* COVER ENHANCEMENTS EVER PRODUCED ONTO ONE COVER to create a singular piece de resistance that will forever enshrine the world’s worst superhero team in the record books for now and all time!

Featuring all-new cover artwork by Valiant superstar Clayton Henry (ARCHER & ARMSTRONG) and a cabal of top-secret special guests, THE MOST VARIANT COVER OF ALL TIME! will be the first-ever embossed, lenticular, die-cut, individually hand-numbered, and chromium-enhanced comic book cover – all before being hand-stickered with a randomized fourth Valiant hero, and printed with two unique foils and iridescent fifth ink!

You wanted the best, you got the best (we could do)! In wake of X-O MANOWAR (2017) #1, SECRET WEAPONS #1, BLOODSHOT SALVATION #1, and NINJA-K #1, Valiant’s “ICONS” initiative – a new wave of must-read monthly series, prestige-format projects, and standalone events for the publisher’s biggest and most demanded heroes – is taking things way too far with the return of the world’s worst superhero team! That’s right – on December 20th,the Valiant Universe is about to get the adjective-worthy superheroes it deserves: QUANTUM AND WOODY! 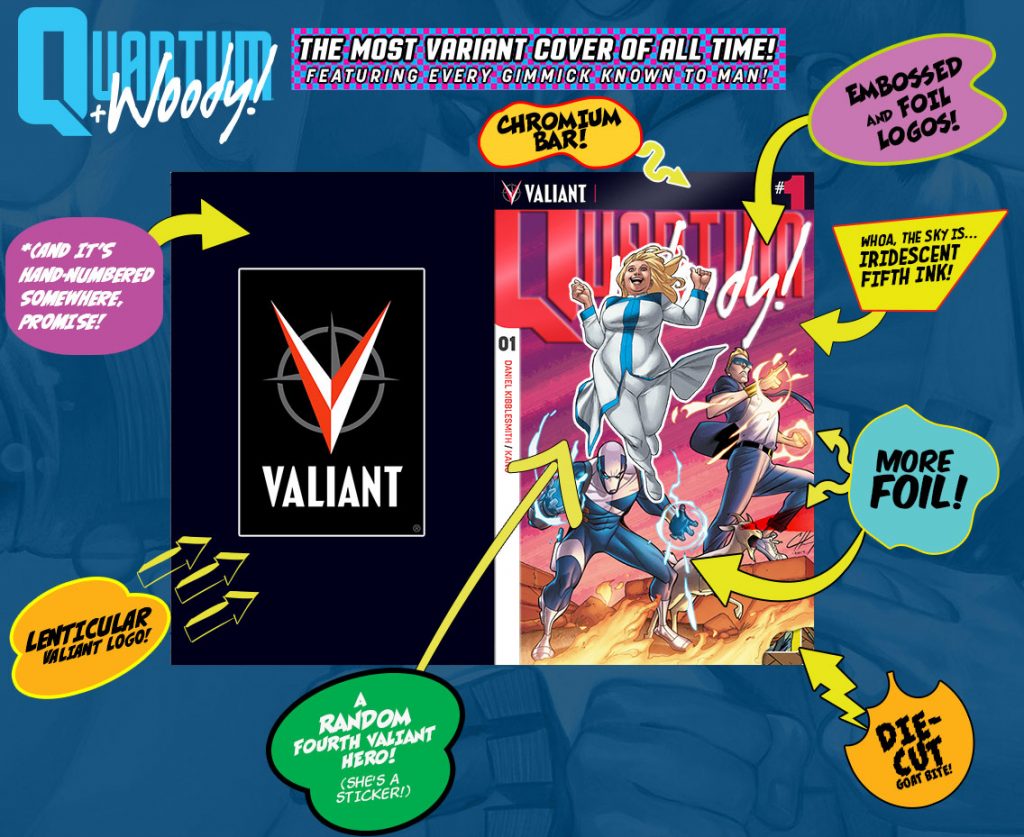 Sometimes…you embrace your destiny. And sometimes…you and your trouble-making adopted brother find yourselves trapped in a scientific lab explosion that grants you $@&%ing awesome super-powers. As a result oftheir accident, Eric and Woody Henderson – aka Quantum and Woody – must “klang” their wristbands together every 24 hours or both dissipate into nothingness. Which makes superhero-ing pretty awkward when you’re not on speaking terms at the moment. See, Eric has been keeping a pretty big secret: He knows who Woody’s birth father really is…and where he’s been hiding all these years.

PLUS: In honor of Quantum and Woody’s upcoming overthrow of comic shops everywhere, each of the new series’ first 12 issues will also feature EXTREME ULTRA-FOIL VARIANTS — a dynamic, new(ish) cover treatment featuring artwork by superstar artist Geoff Shaw (God Country) EMBOSSED and ENHANCED with AUTHENTIC COMICS FOIL FROM THE ‘90s!

Available at the standard cover price with no minimum order qualifications for retailers, relive the face-melting radditude of the era that gloriously birthed Beavis and Butthead Ren and Stimpy Quantum and Woody into comics history with the best foil covers ever produced by a major comics publisher* as Valiant’s EXTREME ULTRA-FOIL VARIANTS kick nostalgia in the nards!

THEN: Don’t relax, we’re not through here yet… Fans and collectors can get their chase on with Valiant’s EXTREME ULTRA-FOIL CHASE VARIANT subset! Each month, in the tradition of comics’ most highly sought-after oddities and error editions, Valiant will produce a single, STRICTLY LIMITED-RUN VARIANT of Geoff Shaw’s EXTREME ULTRA-FOIL artwork with A RARE, SPECIALIZED and SUPREMELY WACKY ‘90s FOIL!

*Except glow in the dark. We tried, though.