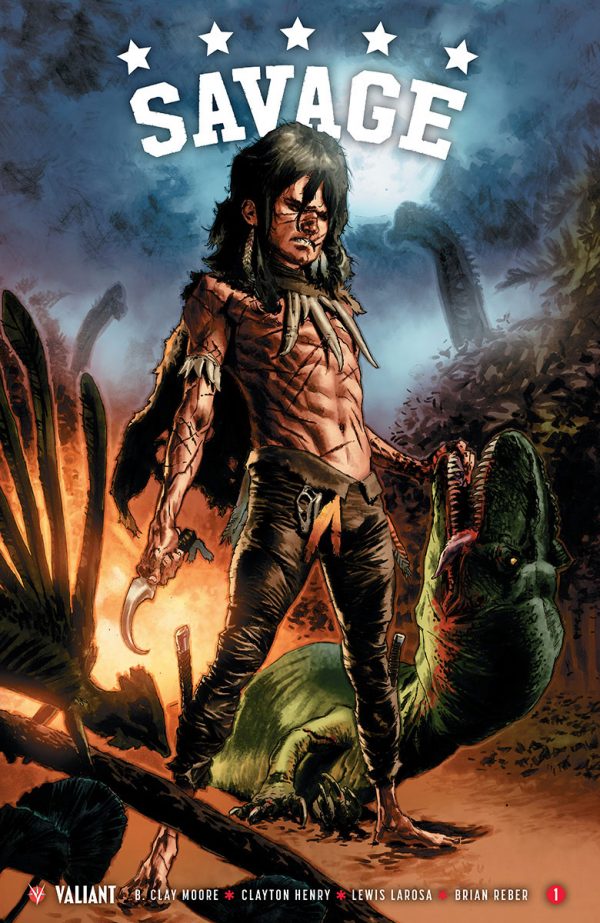 On the heels of DIVINITY, WAR MOTHER, and BRITANNIA, the spine-snapping debut of Valiant’s next major hero is already clawing into an advance sell-out before its November 30th on-sale date!

Valiant is proud to announce that SAVAGE #1 (of 4) – the FIRST ISSUE of Valiant’s primal new series from acclaimed writer B. Clay Moore (Hawaiian Dick) and explosive artists Clayton Henry (HARBINGER WARS) and Lewis LaRosa (BLOODSHOT REBORN), has sold out at the distributor level in advance of its on-sale date and will return to store shelves with the SAVAGE #1 (of 4) SECOND PRINTING on December 14th! This winter, nature conquers all as the next major hero to enter the Valiant Universe makes a ferocious first appearance for the ages! Jump on board here to discover why Valiant is the most acclaimed publisher in comics today as a young family, marooned without hope of rescue, learns how to fight tooth and claw – literally – in a strange and unforgiving landscape!

Fifteen years ago, the world’s most famous soccer star, his former supermodel wife, and their young son disappeared without a trace. The world believes they are dead… But, in reality, their private jet crash-landed on a mysterious, unknown island ruled by prehistoric creatures from another time…

This is the story of how they lost their humanity.

On December 14th, Valiant’s most killer new series of the season slashes forward in a landmark debut packed with tragedy and terror, only in the SAVAGE #1 SECOND PRINTING! Presented in the deluxe VALIANT PRESTIGE format with high-grade covers and interior paper stock, custom-designed end sheets, and exclusive creator commentary and back matter, relive the epic coming of Valiant’s most-demanded new hero right here!

Plus: the primal origin rages on just two weeks later in SAVAGE #2 (of 4)! On December 28th, the baptism of bloodshed continues as B. Clay Moore, Clayton Henry, and Lewis LaRosa shear away at the seminal comics debut of 2016! Calamity, carnage and claws await in SAVAGE #2 (of 4) – featuring covers by Lewis LaRosa (Punisher MAX), Jared Fletcher (Paper Girls), and Bill Sienkiewicz (Elektra: Assassin)!