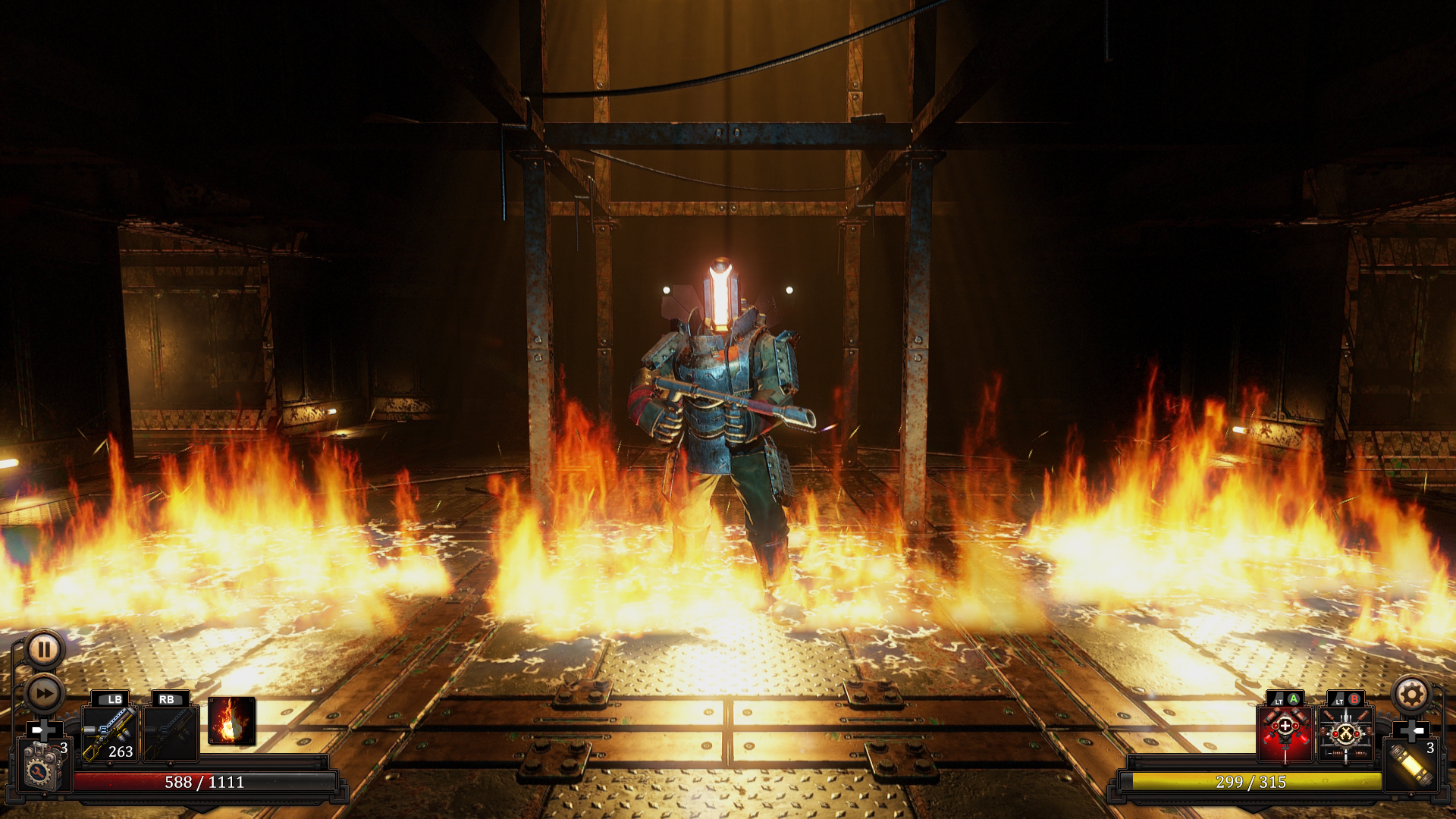 Vaporum is a game that checks all the boxes for me. Tactical, strategic combat on a grid map with deep RPG elements? Shut up and take my money. However, right away I knew I was going to have a lot of mixed feelings about the game. The intro and storytelling are questionably decent, but the gameplay itself is solid. The 3D environments look fantastic, although, after playing Operencia, the clunky 90-degree camera turns just aren’t doing it for me anymore, regardless of the fact it’s a staple to the genre. The grey-washed, dimly lit hallways create a terrifying feeling that will keep you on your toes every time you open a door or turn a corner. Couple that with great music and sound effects, and you find you have something extraordinary here.

Opening artwork and narration are great, but the story quickly becomes overly cliche. Our hero wakes up without any memory, and as he delves deeper, it all feels familiar somehow. It feels familiar because, essentially, this game is Bioshock had it been made by the guys who did Grimlock. He finds himself washed ashore without his memory in a strange, isolated, futuristic, mechanical dungeon built by people who wanted to advance science, now abandoned with the exception of it being filled with murderous enemies, crazy power suits, and gadgets that are basically sciencey “magic.” Once I noticed these similarities between the two games, I couldn’t unsee it, and it spoiled the experience for me somewhat.

The story is unfolded through the use of voiced recordings and notes you’ll find laying around. It’s not a bad story, I just didn’t find much to be original in any way. Voice acting ranges from not bad to abysmal, coupled with terrible writing made the story painful to sit through at times. Just as the plot picks up, breaks off from being “Bioshock Tactics” and finally finds itself, it ends. I don’t hate it, just wished for a little more. 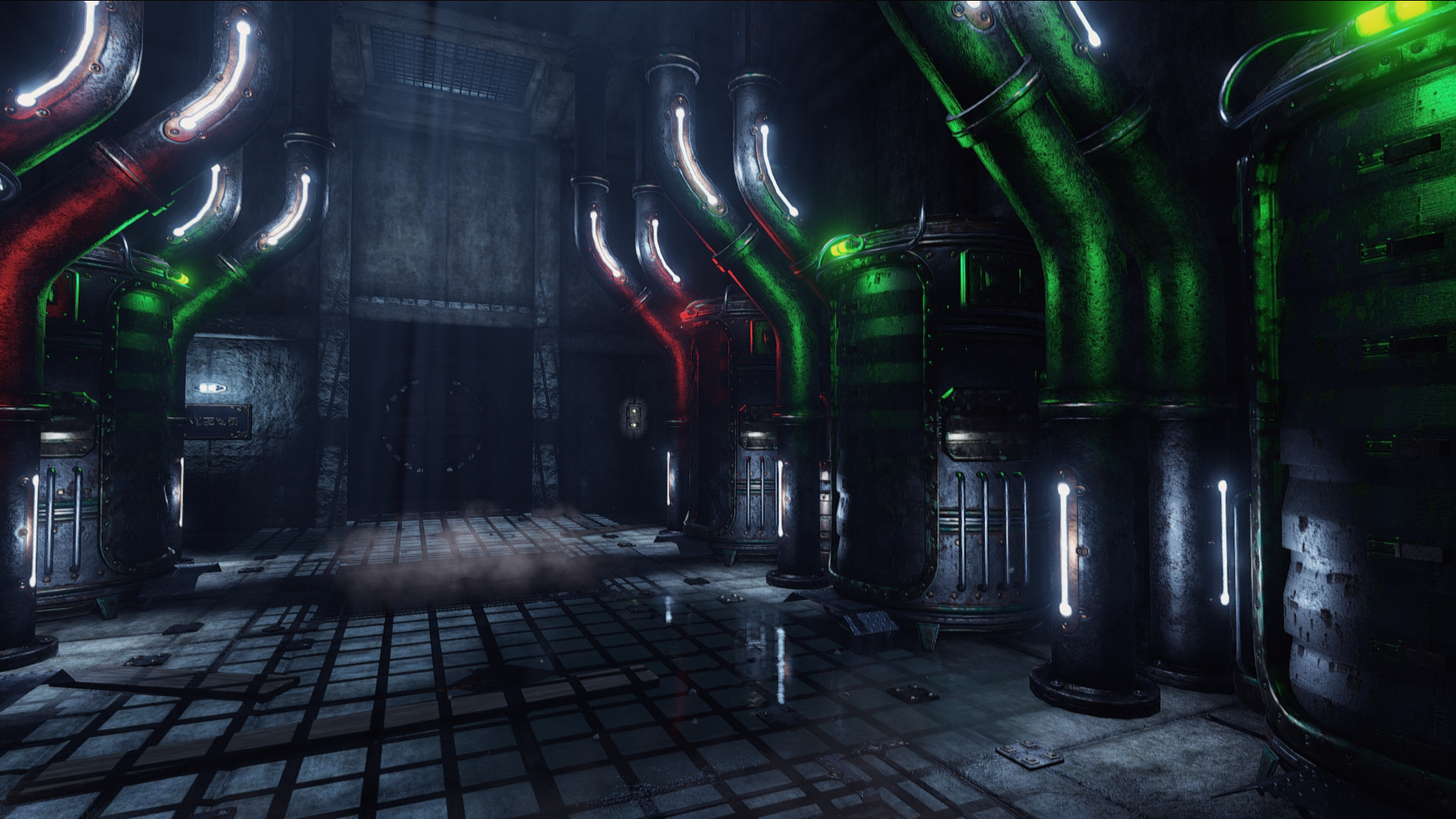 When the game starts out you have the option to choose between a few different “Rigs,” which are essentially this game’s version of classes. Some are heavy, focusing on defense, and others are more heavy hitters, forgoing defense. Many to choose from, each has its ups and downs. You’ll get armor to help beef up your defenses, as well as two weapon types; close and long range. Long range weapons will eat up ammo, so it’s best not to be too trigger happy.

Switching between two weapon load-outs on the fly is possible. I found myself picking a heavy rig and sticking with a crowbar and a shield most of the time, switching to my pistol when things got interesting. Leveling up will allow you to put skill points towards new passive abilities that compliment your playstyle or weapon choice.

Combat is where this game truly shines and makes fantastic use of grid mechanics. After a certain point in the game, you are given the ability to stop time. Slowing things down to one move at a time, creating an fantastic tactical experience. You’re going to need a second to think too, especially when the game throws multiple baddies your way.

Puzzle mechanics are nicely paced between all the combat, with them starting out easily enough. Move boxes around to create paths, or drop bricks on switches to keep doors open. Nothing Zelda hasn’t prepared you for already. After a while, they can get pretty interesting, a few good headscratchers to be found, but never to the point of wanting to crowbar your TV.

A great addition to the genre, perhaps not as great as Grimrock, but it definitely stands out from the crowd. The only real dislikes I have with the game are the story and the game’s telling of it. Terrible lines and even worse voices reading those lines made me skip most of the dialogue. On top of that, there was a real lack of variety in enemies and environments. I had fun, I just wish there was more, and a better story.

Overall, I would give Vaporum 6 acid spitting bugs out of 10. For its price, it’s well worth checking out.