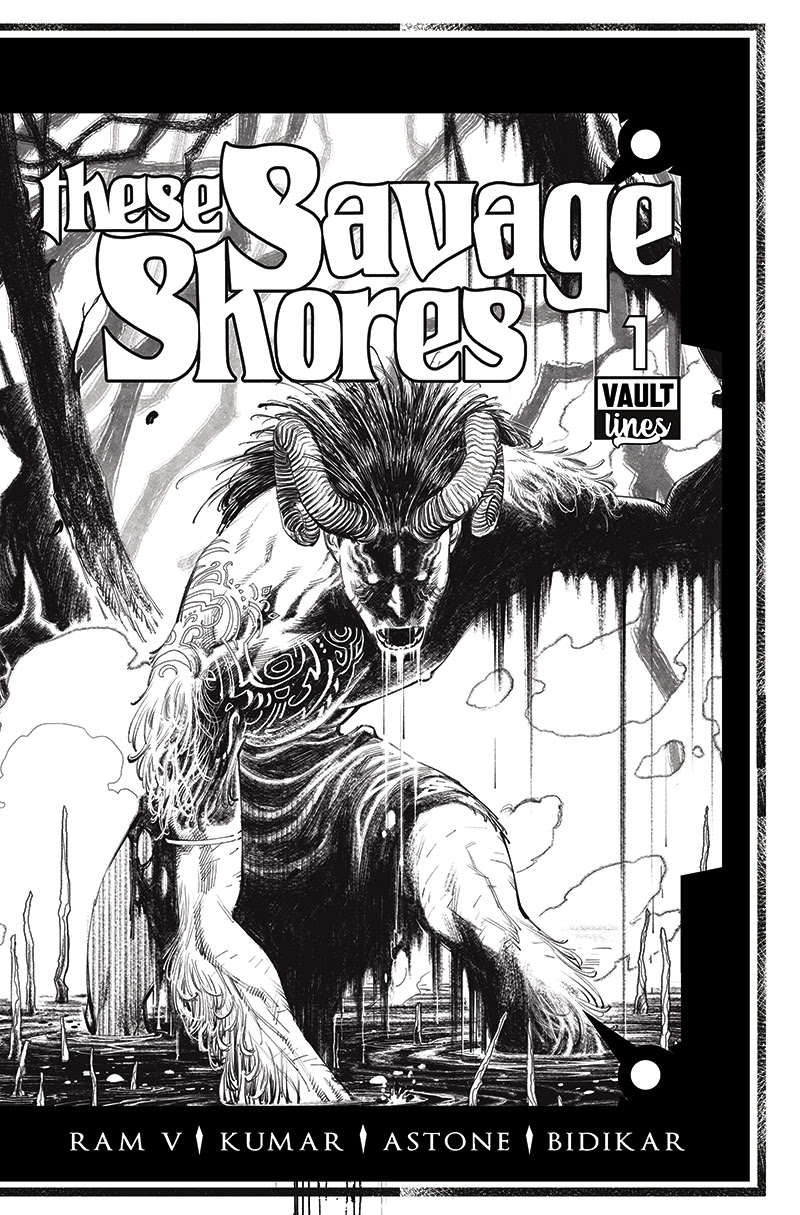 Vault Comics is thrilled to announce that, after extremely high demand, These Savage Shores #1 will receive a very special printing as part of the new VAULT LINES series of deluxe black-and-white special edition issues highlighting the astonishing original inks from Vault artists.

Printed on deluxe heavyweight paper, Vault Lines introduces a brand-new presentation venue to the growing Vault catalogue which aims to spotlight the artists of some of our most successful titles in a series of pristine black and white editions.

“The creative team for These Savage Shores has greatly impressed us since the initial pitch,” said Vault VP of Branding & Design, Tim Daniel. “Series artist Sumit Kumar’s highly detailed command of light and shadow has imbued Ram V’s tale with a deeply realized and exceedingly rich texture. Once you lay your eyes on Sumit’s unadorned work, you’ll quickly discover why he’s become of the top artists working in comics and the perfect candidate to launch Vault Lines.”

One of the most critically-acclaimed comics of the year, These Savage Shores is written by Ram V, drawn by Sumit Kumar, colored by Vitorio Astone, and lettered by Aditya Bidikar.

The official synopsis can read the below:

Two centuries after the first European ship sailed to the Malabar Coast and made landfall at Calicut, The East India Company seeks to secure its future along the lucrative Silk Route, in the year 1766. An old evil now sails aboard a company ship, hoping to make a home in this new found land. But he will soon find that the ground along the Indus is an ancient one with daemons and legends far older than himself.
WHAT PEOPLE ARE SAYING ABOUT THESE SAVAGE SHORES:

“One for me… A fresh, dark twist on classic horror.”  -SCOTT SNYDER

“These Savage Shores transports elements of Dracula to the Silk Route of the 1700s, bringing that text’s themes of xenophobia into an entirely new light and melding it with far older legends of India.”  -PASTE MAGAZINE

“These Savage Shores is a testament to how thoughtful and exciting comic books can be. Go out of your way to read this book.”  -COMICOSITY

“Crafted with care and presented with passion, “These Savage Shores” is a series not to be missed.”  -MULTIVERSITY