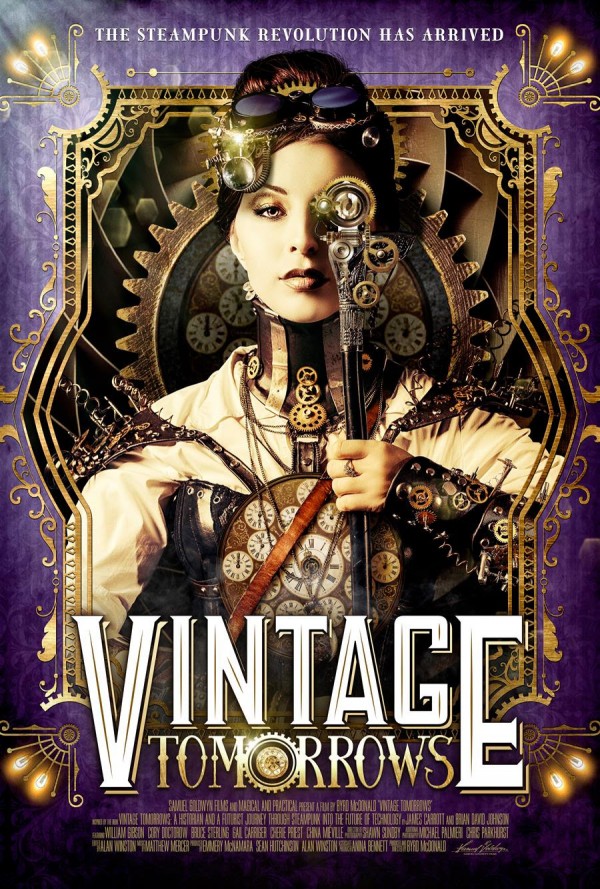 The Many Aspects of Steampunk Come Together with Vintage Tomorrows

The influence of Steampunk on today’s popular culture is evident in just about every art form you can think of. From novels to comic books, music to machinery, fashion, film, television, and more, odds are you have seen something that is influenced by the Steampunk movement. With the film Vintage Tomorrows, we get an inside look at some of the modern day pioneers of the genre.

The documentary, directed by Byrd McDonald (Samuel Goldwyn Films), takes us into the minds of some of the most creative minds in Steampunk. Divided into dedicated section but unified by a roundtable discussion with guests like the musicians Abney Park and Erica “Unwoman” Mulkey, writers William Gibson, Cherie Priest, graphic novel creators Paul Guignon  and Anina Bennett, artists the Neverwas Haul gang and more.

This introspective look into Steampunk is something I feel all should see. Whether you are a fan already of the movement, like I am, or just curious to see what it is all about, this documentary is knowledgeable, but above all, entertaining. We see how these experts in the field define the often hard to describe world of Steampunk, and what drives them to do what they do. For some, its paying homage to the throwback technology one may have seen in an alternate Victorian era. For some, it’s the outlet to be creative, to be someone different, whether by in cosplay, in concert, and so forth. For some, it has brought love into their lives, as we see an actual wedding ceremony in grand Steampunk fashion.

Vintage Tomorrows does a superb job of capturing the essence of Steampunk within the confines of a film. Once you start watching it, I am afraid you won’t be able to step away until the film ends: it is that engaging. As Steampunk continues to gain steam across the globe, this film cements itself as one of the defining works of art regarding the genre, the movement, and the lifestyle.

Vintage Tomorrows is officially released on July 19th and can be purchased at iTunes or Amazon. Also, find the trailer below to get a taste of the film.