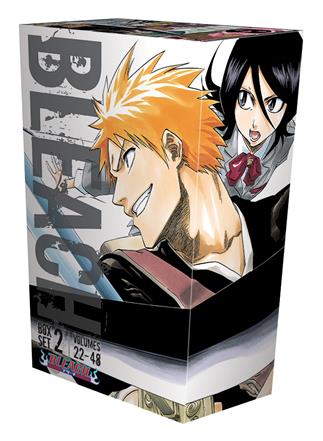 VIZ Media, LLC (VIZ Media), the largest publisher, distributor and licensor of manga and anime in North America, prepares to thrill ardent fans of the BLEACH and NARUTO manga (graphic novel) series as it announces the forthcoming release of the latest box set editions for both titles.

Scheduled for release on July 7th, the BLEACH Manga Box Set 2 and NARUTO Manga Box Set 2 each contain over twenty individual manga volumes at a substantial savings over buying them individually. Exclusive bonus premiums, such as special mini-comics and full-color posters, are also included in each set.

The latest BLEACH Manga Box Set contains Volumes 22-48 and includes an exclusive mini-comic containing the pilot story of the bestselling series along with a full-color, double-sided poster. In creator Tite Kubo’s manga series, BLEACH, Ichigo Kurosaki never asked for the ability to see ghosts – he was born with the gift. When his family is attacked by a Hollow–a malevolent lost soul – Ichigo becomes a Soul Reaper, dedicating his life to protecting the innocent and helping the tortured spirits themselves find peace.

In the latest Box Set volumes, after finally rescuing their friend Rukia, Ichigo and friends return to their quiet lives in the world of the living. However, the peace is short-lived as new enemies arrive from the world of the Hollows. Aizen is back, and Ichigo may be the only one who can stop him for good!

Additional information on BLEACH is available at: http://www.viz.com/bleach.

Naruto is a young shinobi with an incorrigible knack for mischief. He’s got a wild sense of humor, but Naruto is completely serious about his mission to be the world’s greatest ninja! In the second NARUTO Manga Box Set, featuring Volumes 28-48, it’s been more than two years since Naruto left to train with Jiraiya. Much has happened while he has been away, and new threats to the ninja world have emerged. Can Naruto prove his worth and rescue his friend Sasuke? The new box set also will feature an exclusive mini-comic containing the NARUTO pilot story and a full-color, double-sided poster.

Additional information on NARUTO is available at: http://www.viz.com/naruto.