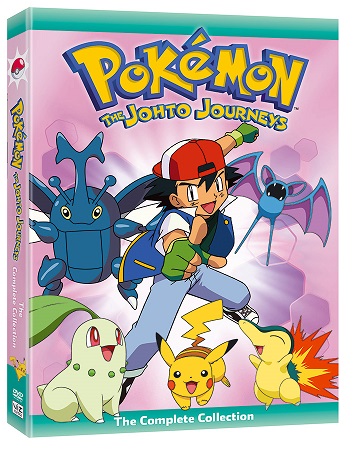 VIZ Media, LLC (VIZ Media), the largest publisher, distributor and licensor of manga and anime in North America, delivers fun new POKÉMON animated adventures to audiences as it announces the DVD release of POKÉMON: THE JOHTO JOURNEYS on November 10th.

The complete 41-episode series constitutes the third season of the venerable anime adventure property and will be released in its entirety for the very first time in a 4-disc set. POKÉMON: THE JOHTO JOURNEYS is rated ‘TV-Y7,’ for viewers ages 7 and older, and carries an MSRP of $44.82 U.S. / $51.99 CAN.

In POKÉMON: THE JOHTO JOURNEYS, upon returning to Pallet Town, Ash and Misty reunite with Brock and set out on the next stage of their Pokémon journey – the Johto region! Though he still has an errand to run for Professor Oak, Ash jumps with both feet into the Johto League, taking on a couple of Gym Leaders and adding Pokémon like Totodile and Chikorita to his team.

For more information on other Pokémon manga and anime titles from VIZ Media, please visit www.VIZ.com.