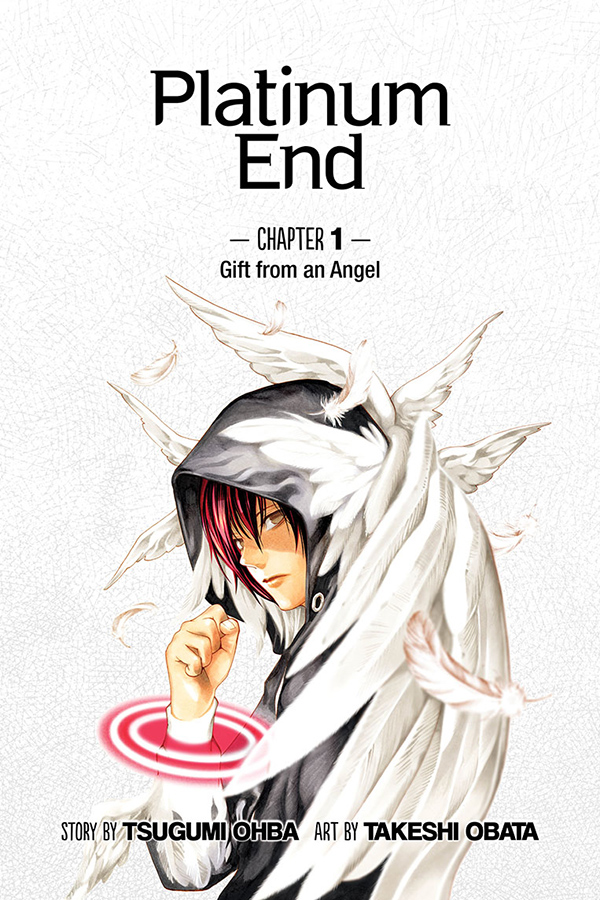 Fans will not want to miss the launch today of PLATINUM END, the brand new series by the creators of DEATH NOTE and BAKUMAN｡, offered as a digital exclusive from the VIZ Manga app, VIZManga.com, the WEEKLY SHONEN JUMP app, the shonenjump.viz.com website and also from ComiXology. Chapter 1 is available now for only $0.99, with new chapters of the series releasing monthly, simultaneous with Japan.

Catch the debut of this new series by famed shojo manga creator Arina Tanemura! At age 31, office worker Chikage Deguchi feels she missed her chances at love and success. When word gets out that she’s a virgin, Chikage is humiliated and wishes she could return to the time when she was still young and popular. She takes an experimental drug that changes her appearance back to when she was 15. Now Chikage is determined to pursue everything she missed out on all those years ago—including becoming a star!

In this new fiction novel that also features artwork by NARUTO manga series creator Masashi Kishimoto, a year has passed since the Fourth Great Ninja War, and Kakashi’s appointment as Hokage looms. But first he heads to the Land of Waves for a dangerous mission rescuing hostages from a top-secret airship. There he confronts a ninja whose heart is frozen by tragedy. Having lost both his friend’s eye and his greatest abilities, can Kakashi protect anyone from his coldhearted foe? What is the true meaning of the Will of Fire gained in the distant heavens? Kakashi finds these answers and more as he enters a new ninja era.

A brand new series being offered as a digital exclusive! From the legendary duo that brought you DEATH NOTE and BAKUMAN comes a dark story of humans and angels. Mirai is a boy who has lost hope in the future. Can a fateful meeting with an angel turn his life around, or will he be plunged into further despair in Takeshi Obata and Tsugumi Ohba’s newest series?

Tamayo Akiyama, a former member of CLAMP, has crafted a fantasy adventure that will leave readers spellbound! Welcome to Zyword, a world filled with sorcery. When Zyword’s Araimel Kingdom is put under a spell, it’s up to the two sole survivors to save the citizens before they perish in an eternal sleep!

This is the story of young Ruri and Sumner, the characters from the Sony Playstation Eureka Seven video games, now featured in their own original manga!

The following Volume 1 editions will be available with special pricing for 24 hours ONLY on November 30th on VIZManga.com and the VIZManga App:

The free VIZ Manga App continues to be the top application for reading digital manga and features a massive library of the most popular series in the world. Through the innovative VIZ Manga digital platform registered users are able to use one account to view their purchased manga across more devices than ever. New series and volumes are added every Tuesday. Fans can also find these titles and more for the NOOK, Kindle Fire, and Kobo eReaders, as well as in the ComiXology, iBooks and Google Play Stores.

Most manga volumes are available for purchase and download in the U.S. and Canada within the VIZ Manga application starting from only $4.99 (U.S. / CAN) each. Readers can also explore free Chapter 1 previews of every series. For more information, please visit VIZManga.com or www.VIZ.com/apps.