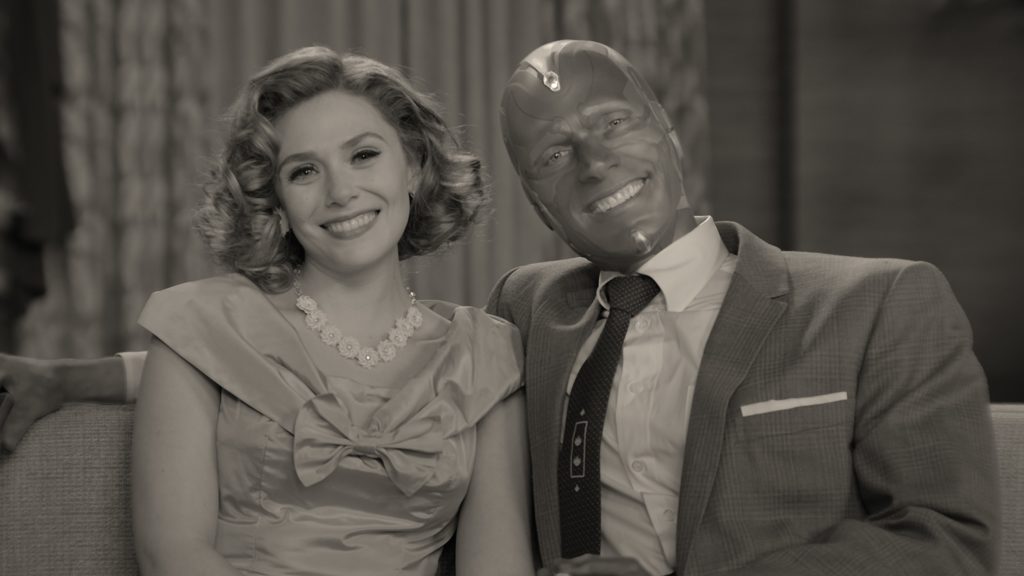 The hype surrounding Marvel’s first Disney+ series has been huge. Previews showed an unconventional format and generated a lot of buzz. Initially, the streaming service dropped the first two episodes, which had the feel of an episode of Bewitched mixed with I Love Lucy. Of course, some mystery was thrown in at the end of the episodes to add intrigue.

Warning: SPOILERS BELOW! Episode 3 (Aptly titled “Now In Color”) follows a similar sitcom format to the first two episodes, except the decade has advanced to the ’70s, and the appearance has changed from black and white to color.

Wanda’s pregnancy (revealed at the end of episode 2) has progressed very quickly. Over the course of a couple of days, she goes through 9 months of pregnancy and delivers twins, all while continuing to go through familiar sitcom tropes.  Beyond that, fans were given much more insight into what is going on with Wanda’s situation. The biggest revelation comes at the end of the episode when she expels Monica Rambeau from her fantasy world. Monica is thrown through what appears to be a barrier enclosing Wanda’s world. Waiting for her, appear to be agents of SWORD. Of course, this raises several new questions about Wanda’s new reality.

These questions include what the nature of SWORD’s involvement with Wanda’s world is. Is she their captive? Was Monica Rambeau trespassing? How did Monica remember Pietro being killed by Ultron when no one else can remember anything about the past? Why does Wanda get so angry when any remembrance of the real world creeps into her world? Is her world its own contained universe? Are all of the other people in the town robots? Does Vision only exist in this bubble? So many questions. We should get answers to all of them in the coming weeks.

So far, WandaVision has been a very unconventional and entertaining show. While following the familiar sitcom formats, Wanda and Vision have been funny, and the episodes fly by. As the nature of her reality comes into focus, I am sure the action and superhero drama will also increase.

Rating: FIVE Pastrami Nations out of FIVE. Unusually funny and full of mystery, WandaVision is definitely a must-watch.