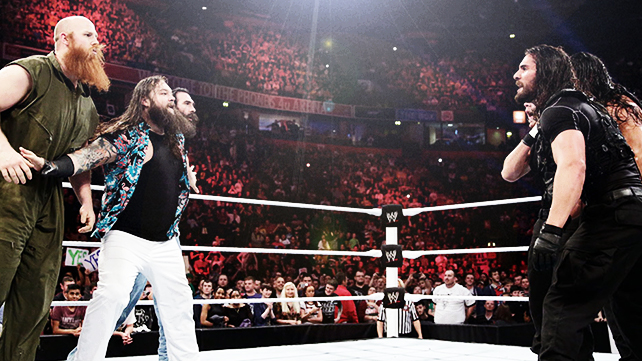 (Victorville)– Tonight is the night, this is it. Tonight is the WWE’s Elimination Chamber PPV, and at it is a clash of the factions. A battle of the trios. Tonight, The Shield take on the strange, massive Wyatt Family.

This has been building for awhile now, and fans have been wanting to see who would win. In one corner, you have The Shield: Dean Ambrose, Seth Rollins and Roman Reigns. A trio that has made such a massive impact on the WWE, and each for their own reasons. Ambrose is the best on the mic out of the three, Rollins, being a former NXT Heavyweight Champion, provides the most diversity in his moves, and Reigns… well, he is the powerhouse, no question. They went from a group who might be working with Paul Heyman into an actual force of nature in the WWE, decimating all in their way.

Their opponents, the Wyatt Family, are no slouches either. The charismatic leader, Bray, is no stranger to the WWE, as he is the former Husky Harris, and son of WWE Superstar IRS. But with the Wyatt’s, he has found his niche, and he masterfully rocks the mic like a cult leader, leading lambs to the slaughter. Eric Rowan and Luke Harper are the muscle of the group: two massive, mountain like men that look like something you would see in the film “The Hills Have Eyes”, but that’s not all. These guys, they can wrestle. Harper’s discus clothesline and big boot are game changers in the ring, and Rowan’s physical nature only helps make the Wyatt’s that much more of a threat.

So when the two collide, who is left standing?

I would say The Wyatt’s, based off of the way story-lines are going, but I am going with what I hope, and that is that the Shield reign supreme. Yes, the team has tension, and yes, Reigns is ready to break out as a star on his own, much like his cousin, The Rock. But the Shield have everything they need to take apart the eeriness of the Wyatt’s, even if only to disband right after. In closing… believe in The Shield.