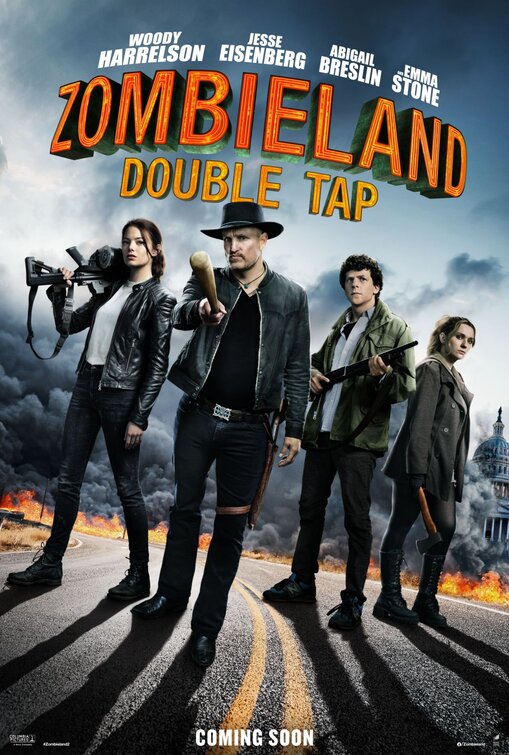 It is a sequel I have been waiting for since the first film ended. When Zombieland hit theaters all those years ago, I was amazed by the blend of horror, comedy, and world-building that drew in the audience and didn’t let go. After a horrible launch of a TV internet-only series, we finally get a proper sequel to Zombieland with Zombieland: Double Tap. Did the film capture the same essence and greatness of its predecessor? Or did the sophomore slump infect the undead?

The original cast is back, even the great Bill Murray, to some degree. Years have passed since the showdown at Pacific Playland, and our ragtag band of misfits is still going strong. Columbus (Jesse Eisenberg) and Wichita (Emma Stone) have continued as a couple, Little Rock (Abigail Breslin) is now 18 and looking for companionship of her own, and Tallahassee (Woody Harrelson) is still obsessed with fast cars and violence. After seeking refuge at the White House, the group lives comfortably for a bit, until Columbus popped the question, which sends Wichita and her sister off on their own.

This is where the story picks up. While blowing off some steam from being shafted, Columbus and Tallahassee meet another living, breathing human in Madison (Zoey Deutch), a cute, air-headed blonde that has survived by living in a freezer at a Pinkberry in the mall. Eventually, Wichita returns, as Little Rock has run off with a hippie boy from Berkeley, headed to Graceland. This sends our band of heroes, and Madison, towards the home of Elvis himself and plenty of danger. A new, stronger strain of zombie has emerged, and it all boils down to a showdown with humans against zombies in a newly dubbed Babylon, complete with a tower.

The essence of the first film remains intact, thankfully. Columbus’s rules still take center stage, especially when the group comes face to face with some very familiar survivors. Joining the cast for this new outing is Nevada (Rosario Dawson), a tough as nails woman that catches the eye of one Tallahassee. The two main additions to the film feel like a natural fit. Madison, though not the brightest, is a character you can’t help but love, and she shines in every scene. Dawson provides some balance to the lone wolf Tallahassee, and honestly, I am fine with any film that adds Dawson, as she is tremendous in every role I have seen her in.

The first film was about finding yourself and enjoying the little things: this one is firmly about the family we chose in our lives and the lengths we go to protect them. The violence and language have ramped up for the sequel, which I am all for as it fits the tone of the film. The cast one again delivers an outstanding performance. At the showing I went to, I heard a couple talking down on Breslin’s performance, stating she must “be done with acting” due to the weight she put on. That comment troubled me for many reasons- first, she was great in the film. Second, her weight doesn’t dictate her acting abilities. Third- she was a kid in the first film and is now an adult, yes she is going to look different.

Zombieland Double Tap is a fantastic film that builds off the foundation laid by the original. I felt it kept the quirky spirit of Zombieland while giving us some new additions. If you loved the first film, you will not be disappointed.