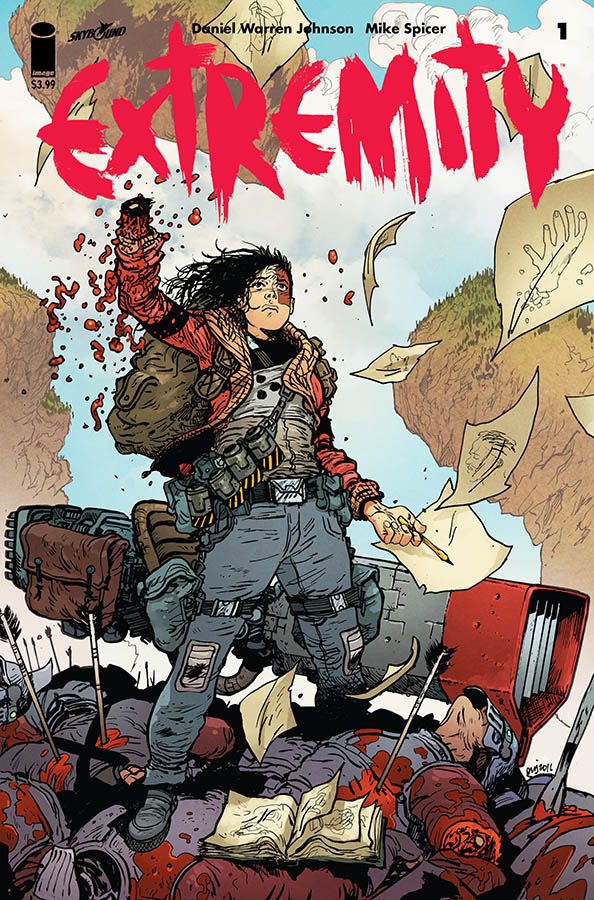 Image Comics is the hub for creator owned creativity in the comic book world. This year has been outstanding for projects already, and we are only in a few months. With Extremity, we get a very violent, very dark story of a young heroine out for vengeance against the evil faction that took so much from her and her family.

Written and drawn by Daniel Warren Johnson (Space Mullet) with incredible colors by Mike Spicer, Extremity is a tour de force of action. Princess Thea, a young artist, had her world shattered the day the Paznina raided her home, killed her mother and chopped off her hand in an act of sheer cruelty. Losing the ability to create art, it left the young princess thirsty for vengeance. She is the opposite of her brother Rollo, who is next in line to the throne but cannot bring himself to take part in the bloody rampage laid forth. Led by their father, Jerome, the siblings and their people, the Roto, go head first into a Paznina War Machine, weapons in hand and blood on their mind.

You should know by now that this is definitely a rated-R, mature readers book. That in mind, its an amazing first issue that introduces this very war torn, fantasy world. Part Mad Max, part anime, Extremity is packed to the gills with action, blood, and revenge. To see Thea gain some sort of satisfaction against Asmund, one of the Paznina there when she lost her hand, is extremely satisfying. Johnson has created an amazing debut issue from Image and Skybound. Extremity is full of violence, amazing designs, and a story that is ready to kick into an even higher gear.