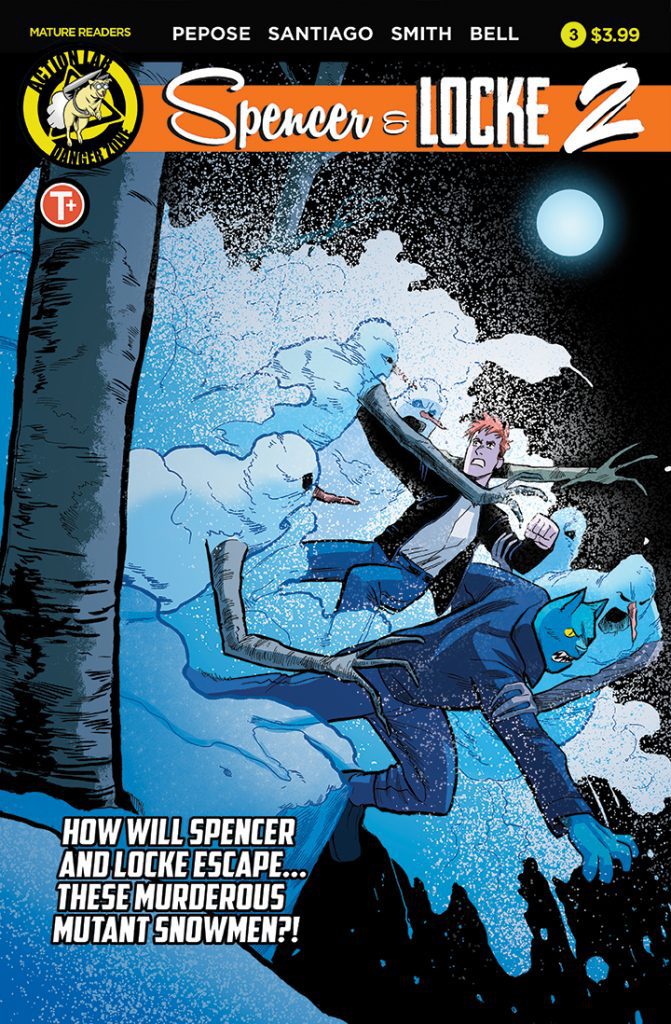 Roach Riley’s rampage continues in the fascinating third issue of “Spencer & Locke 2”, tearing a city apart and leaving behind a trail of collateral damage, both physical and mental.

The last time we saw Detective Locke and his imaginary partner Spencer, it seemed like it could be the end for them. Locke was on trial before Roach showed up and started destroying everything in his path, including the courthouse and everyone in it. It was a fight for survival, with Locke’s main priority being his young daughter Hero. Needless to say, the fight didn’t go well, leaving a lot of people dead and the fate of our heroes in question. But out of the ashes, a new hero emerged, one that nobody saw coming.

We pick up issue 3 with more of Roach’s shenanigans. He is still on a mission to destroy the city, but his motives aren’t clear to anybody. But one person is getting closer to the truth, and that is star reporter Melinda Mercury. She’s been on the case and is slowly unraveling who Roach is, and who is pulling the strings. Meanwhile, there is a new hero in town, and her name is Captain Astounding. She is on a mission to stop Roach at all cost, and she will use all the knowledge her father taught her to do so.

Oh yeah, and there are Killer Nazi Snowmen on a journey inside of Locke’s mind where all of his regrets and past indiscretions live, and he and Spencer are forced to make the ultimate choice.

The last issue ended with such a great unexpected twist, and here the story of Spencer & Locke continues to go in unexpected and exciting places. Writer David Pepose is a master at adding new revelations and new layers of psychological trauma as the series progresses. In this issue, we get an inside look at someone tormented by their own mind, and it’s not the villain of the story, it’s our hero. He’s someone who has made mistakes, someone who isn’t perfect, someone who hasn’t always done the “right” thing. But he’s also someone who does what it takes to make the world a better place. I feel like there is a little bit of that in everybody, and Pepose writes it so brilliantly.

The artwork by Jorge Santiago, Jr., and Jasen Smith is incredible. There is a noticeable, but very subtle, change in the color palette when in the real world and the imaginary world of Locke’s mind. It’s a little thing, but one that makes a huge difference, and it’s done beautifully. The costume for our new hero Captain Astounding is really simple but incredibly effective. Everything else, as per usual for this series, is top notch and a real piece of art.

Although it’s packed with plenty of action, this issue is one of the most interesting, story-driven issues in the series. We learn more about the heroes, as well as the villain. There are some genuinely surprising twists in the story that you won’t see coming. It’s a roller coaster ride of emotions, revelations, and action. It’s a fantastic read!