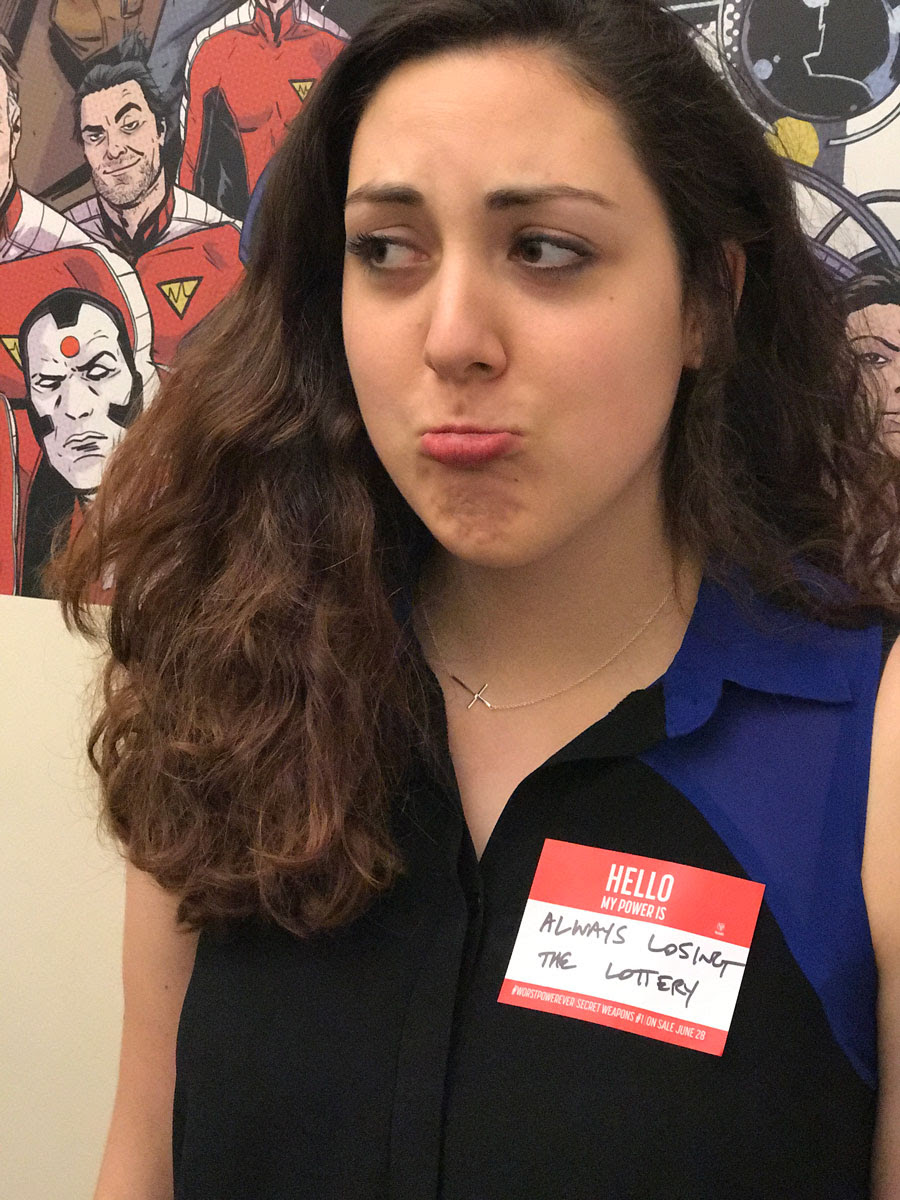 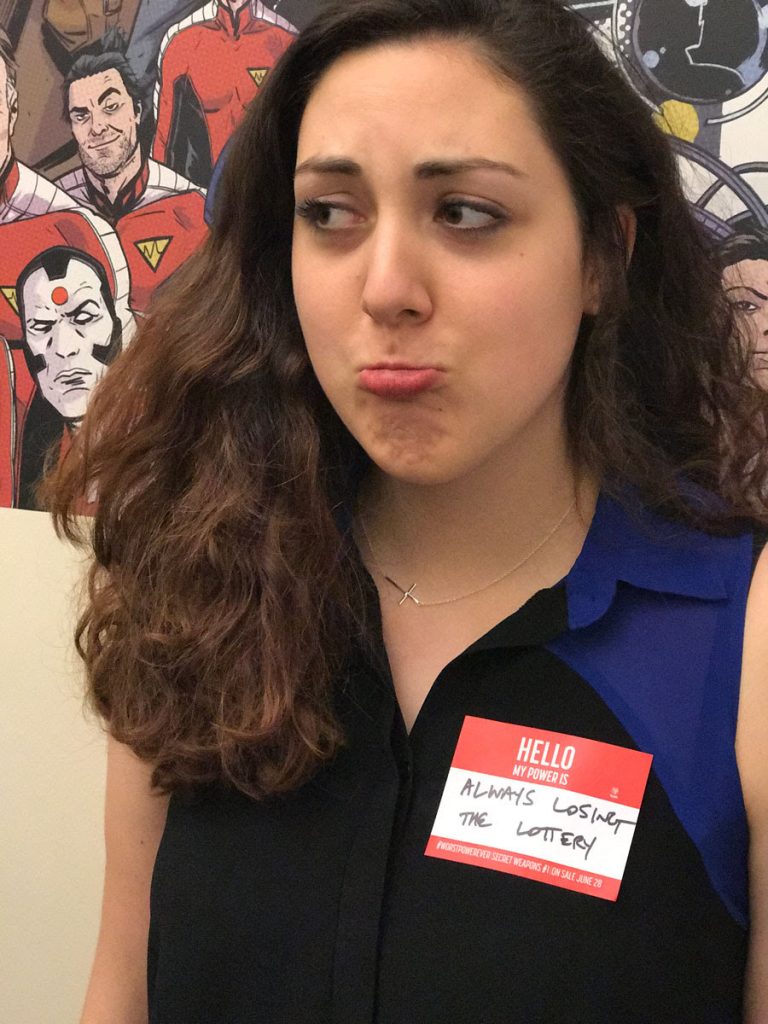 With the first issue of the summer’s most anticipated new series just weeks away, Valiant is proud to reveal the SECRET WEAPONS #1 #WorstPowerEver name tags – a custom-made sheet of promotional stickers allowing fans everywhere to showcase their special abilities in celebration of the Valiant Universe’s most unlikely superteam! Simply visit a comic shop near you and pick up yours before SECRET WEAPONS #1 – the FIRST ISSUE of the extraordinary new limited series from the masterclass creative team of Academy Award-nominated writer Eric Heisserer (Arrival) and visionary artists Raul Allen (BLOODSHOT REBORN) and Patricia Martin (WRATH OF THE ETERNAL WARRIOR) – marches into stores on June 28th!

Nikki Finch can talk to birds… Owen Cho can conjure any object, but he can’t choose what or when… To most, these are remarkable, but mundane abilities. But to Valiant’s technopathic heroine Livewire, they are ripe with potential…waiting to be revealed. Now, she’s taking charge of these abandoned recruits from the Harbinger Foundation to find the hidden purpose behind their arcane and perplexing gifts. Do you have an under-appreciated ability that could earn you a place on Livewire’s one-of-a-kind team of new heroes? This summer, Valiant is letting fans tell the world – and jump in on the action themselves – at local comic shop across the country with SECRET WEAPONS #1 #WorstPowerEver name tags! Show what makes you a secret weapon and let your extraordinary abilities be known by following these simple steps: 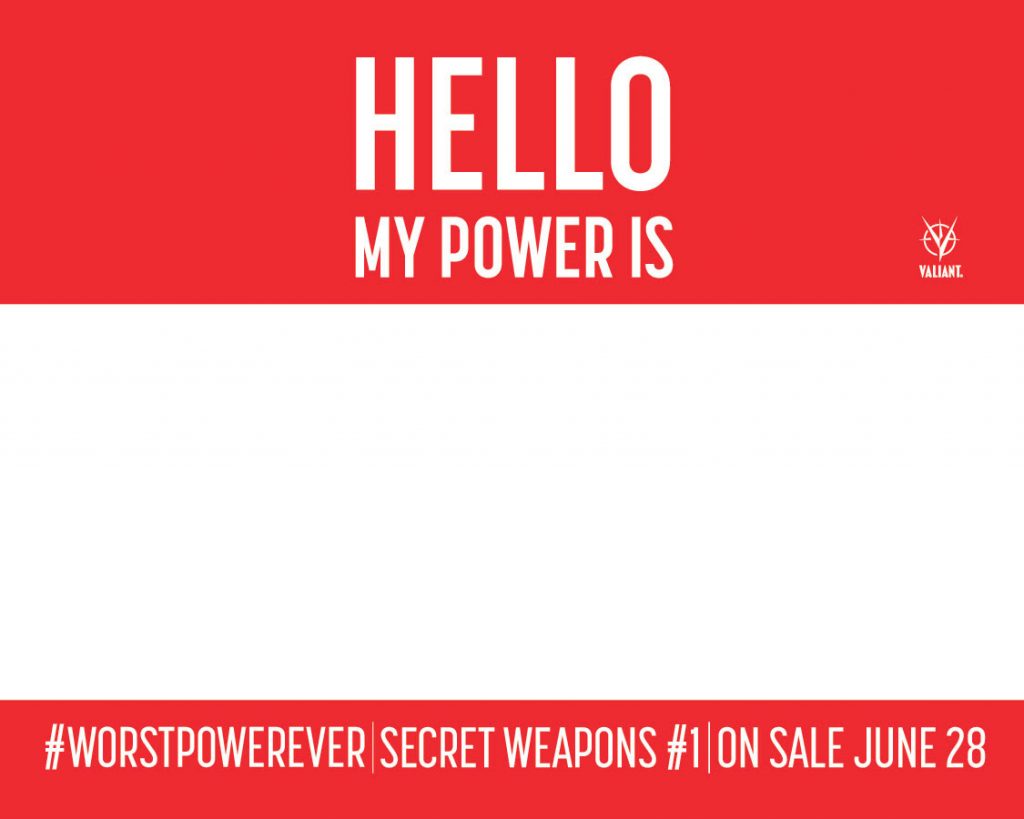 1. Head to your participating retailer and claim your SECRET WEAPONS #1 #WorstPowerEver name tag.

2. Write down what your unique ability would be in clean and legible writing on your SECRET WEAPONS #1 #WorstPowerEver name tag.

The secret is out on June 28th as master storytellers Eric Heisserer, Raul Allen, and Patricia Martin kick off THE ROAD TO HARBINGER WARS 2 – Valiant’s seismic 2018 crossover event – with all-new introduction to a team of heroes like no other in SECRET WEAPONS #1!

The government has dispatched Amanda McKee – the technopath codenamed Livewire – to investigate the ruins of a secret facility formerly run by Toyo Harada, the most powerful telepath on Earth and her former mentor. In his quest for world betterment at any cost, Harada sought out and activated many potential psiots like himself. Those who survived, but whose powers he deemed to have no value to his cause, were hidden away at this installation. But Livewire, having studied Harada’s greatest strengths and learned his deepest weaknesses, senses opportunity where he once saw failure. A young girl who can talk to birds… A boy who can make inanimate objects gently glow… To others, these are expensive disappointments. But, to Livewire, they are secret weapons…in need of a leader. Now, as a mechanized killer called Rex-O seeks to draw them out, Livewire and her new team of cadets will be forced to put their powers into action…in ways they never could have imagined…

On June 28th, find out for yourself why critics far and wide are heralding Eric Heisserer and Raul Allen’s spectacular vision of power and purpose at the epicenter of the Valiant Universe as one of 2017’s essential new series from any major comics publisher:

“✮✮✮✮✮… [SECRET WEAPONS] succeeds on every major level…coming out of nowhere and dominating from the start with a creative team that you never knew was a dream collaboration.” – Comic Bastards

“[SECRET WEAPONS] could shake up comics… [Livewire] is the ideal character for [Heisserer] to focus on after his Academy Award-nominated ARRIVAL screenplay.” – The Hollywood Reporter

“Some of [Heisserer’s] most ambitious work.” – MTV

“✮✮✮✮… Put this one on your pull list, you won’t be disappointed.” – Bleeding Cool

“[Heisserer] is set to make a splash in the comic book world.” – Blastr 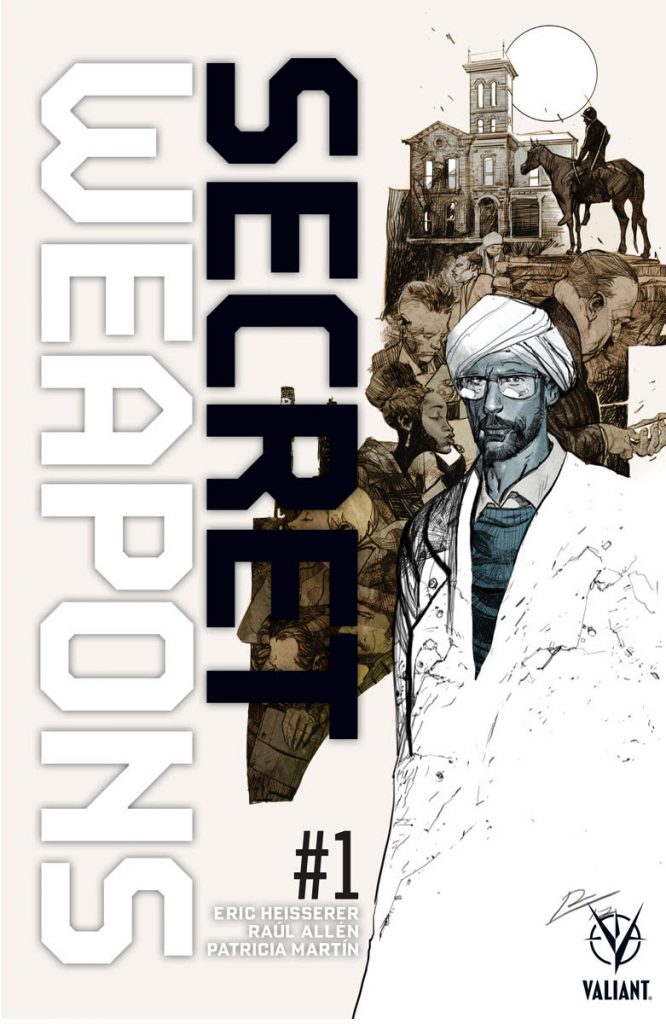 This summer, give voice to your unique abilities with the SECRET WEAPONS #1 #WorstPowerEver name tags – coming soon to a comic shop near you! Then, on June 28th, witness a comics masterpiece in the making as Eric Heisserer, Raul Allen, and Patricia Martin put Livewire in command of a new team of specially gifted recruits whose unpredictable powers will shake the Valiant Universe to its core in SECRET WEAPONS #1 – featuring covers from Raul Allen (NINJAK), Jelena Kevic-Djurdjevic (Thor), Roberto De La Torre (Daredevil), and Bryan Hitch (The Authority)!