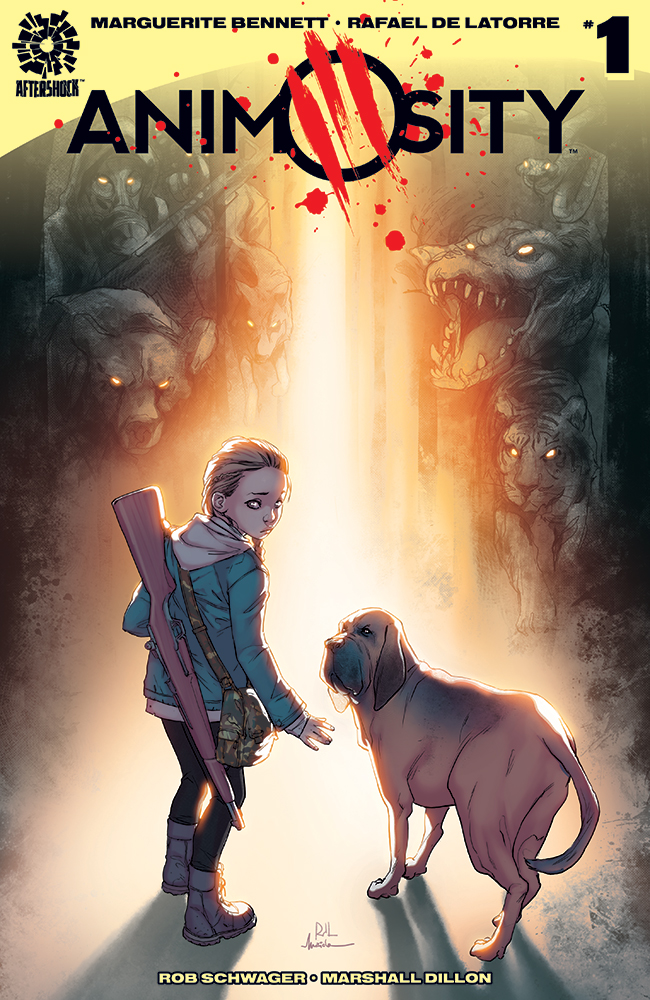 (Victor Valley)—AfterShock Comics have released quite a few diverse books since their inception, and Animosity is the next series to shock and awe readers. Written by Marguerite Bennett with art by Rafael De Latorre, this inaugural issue pulls no punches and is not for the faint of heart.

What if animals could talk? What would they say to us? Would they be friend of foe? This is the central thought behind the series, as one day, animals suddenly can speak. This, of course, can be good and bad, and what we see first is the extremely bad. With the good, we meet our protagonist, a young girl named Jesse and her trusty canine Sandor. The world is going crazy, as animals begin to speak, and think, and plot- but not all. Some, like Sandor, truly love the humans they are with, and would do anything to protect them.

This is such a huge story, such a huge concept; I am surprised we haven’t seen it happen in the world of comics yet. Bennett crafts an excellent first issue, full of gore, surprise and a wonderful set up for issues to come. Latorre’s artwork is fantastic, as the animal kingdom has never looked better, and rats have never looked more threatening than here.

Animosity is one of those books that comes along and steps outside of the norm. It is boldly different than most books one the shelves today, and it rightfully stands out as one of 2016’s best first issues. Whether the rest of the series keeps the steam going remains to be seen, but so far, Animosity looks like its has the bark to match its bite.