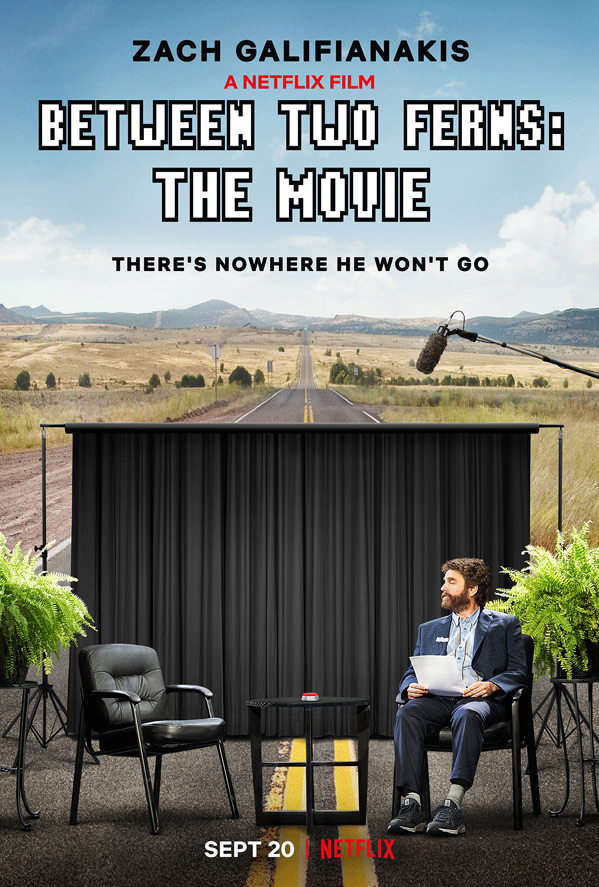 I’m going to admit this up front; I really like Zach Galifianakis. He’s one of the most unique, different, and exciting comedy personalities working today. He has an interesting sense of humor and a unique personality that makes him stand out from the rest. His performances in the Hangover movies were the best of the trilogy, and in Due Date, he held his own against Robert Downey Jr, which isn’t easy to do unless it’s an Avengers movie.

His Funny or Die series Between Two Ferns is fantastic. For those of you who don’t know, it’s a faux talk show which is hosted by Galifianakis (as himself). The episodes are short and feature big celebrities in very awkward interviews. Everyone from Ben Stiller and Justin Bieber to President Obama have been guests on the show, and the interviews are hilarious. And now, Zach has taken the conceit of his show and expanded it to feature-length, courtesy of Netflix. I had the chance to watch it the other night, and I have to say, it was a mixed bag.

The plot of the movie is simple enough. After almost killing Matthew McConaughey (well, technically he did, but the magic of CPR brought him back to life), Zach is almost fired by Funny or Die head honcho Will Ferrell. But instead of firing him, he makes a deal. If Zach can deliver ten episodes of his show with Hollywood’s biggest celebrities, he will forgive him and allow him to stay on board. To sweeten the deal, he also promises Zach his own late-night television show if he can pull this off. And so begins the road trip of a lifetime. Joining him on his journey to achieve his dreams are his loyal assistant (Lauren Lapkus), his cameraman (Ryan Gaul) and the boom mic operator (Jiavani Linayao). And to top it off, a documentary crew is following him along the way, and they catch all their shenanigans.

Directed by Scott Aukerman and written by Aukerman and Galifianakis, Between Two Ferns: The Movie is a hit or miss affair, with most of it landing a bit flat. Throughout the film, the jokes are there, and it’s funny, but it gets old after a while. The first act of the film has some laughs, but not a lot. It starts to pick up a bit when the road trip begins, but after the initial thrill of them on the road, it starts to lose its steam. While the concept is a bit different than other televisions shows turned into films, it still suffers from the same downfalls. Sometimes, things are better in shorter, more concise episodes.

The interview segments are the highlight of the film, and there are a lot of great celebrity cameos for those. I don’t want to give away all of them, but Keanu Reeves, Brie Larson, and Paul Rudd stop by for a chat. They are as uncomfortable and anxiety-inducing as you would expect, but they are hilarious. Major props need to be given to these actors and actresses for being on board with this. There is also a funny (albeit brief) subplot involving Crissy Tiegen that was great, but little things like that were few and far between.

The other great thing about the film is the main cast. They all have great chemistry together, and they are all incredible actors. Ryan Gaul, who plays the cameraman “Cam” (because his full name is Cameron, not because he operates the camera), gives my favorite performance of the film, he’s hilarious. They are so much fun to be around; it’s too bad the film around them wasn’t as fun.

I can’t say to absolutely avoid this film, it’s not horrible, but it’s just not very good. It’s funny and has its moments. If you are a fan of Gallafinakis’s unique humor, you will find things to like here. But overall, it’s just ok.