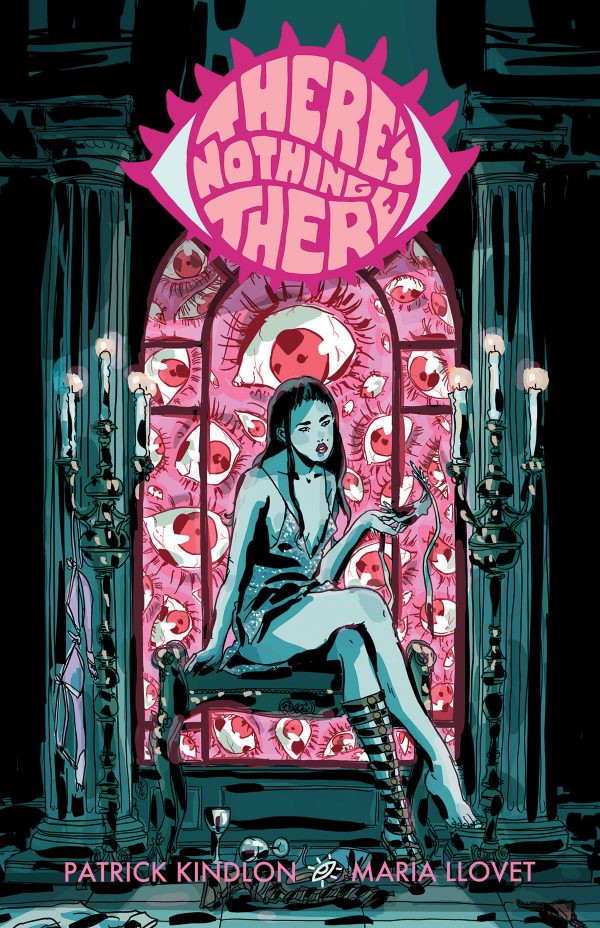 As reported in The Hollywood Reporter, Black Mask Studios has signed a three-book deal with comic writer Patrick Kindlon (SHIELD: Quake), whose creator-owned comic book We Can Never Go Home was a breakout hit for the company.

Kindlon’s first comic book under the newly inked deal will be a horror series titled There’s Nothing There, co-created with artist Maria Llovet, set for release in April. The stylish horror tale centers on celebrity-socialite Reno Selleti who joins a friend to an Eyes Wide Shut-type party mostly for the laughs, but the joke ends quickly in this hallucinatory thriller about losing yourself in the bright lights and finding yourself at rock bottom.

Kindlon will follow There’s Nothing There with a second volume of We Can Never Go Home. The third book in the deal has not yet been announced.

We Can Never Go Home, co-written by Kindlon and his writing partner Matthew Rosenberg (Rocket Racoon, 4 Kids Walk Into A Bank), is a tale of superpowered teenage misfits on the run. The debut volume was critically acclaimed, appearing on over a dozen Best Of The Year lists and winning Diamond Comics Distribution’s Gem Award for Best Graphic Novel Of The Year. Currently in development as a tv series at a major studio, the comic is set to return with a new volume later this year.

Kindlon, who also sings for the hardcore bands Self Defense Family and Drug Church, has been with Black Mask since the company’s launch, contributing a story to Occupy Comics and co-writing Twelve Reasons To Die with Rosenberg, Ghostface Killah, and RZA.

Black Mask was founded in 2013 and has quickly grown into one of the most acclaimed and top-selling publishers of creator-owned comics with a string of hits including Black, Kim & Kim, 4 Kids Walk Into A Bank, Young Terrorists, X’ed, We Can Never Go Home, Godkiller, Jade Street Protection Services, The Dregs, Space Riders, and more. Black Mask’s production arm has several feature films in development and has set up seven TV series at various studios, including Grant Morrison’s Sinatoro at Universal TV with Chris Weitz (Rogue One) and Paul Weitz (Mozart In The Jungle) producing alongside Black Mask.