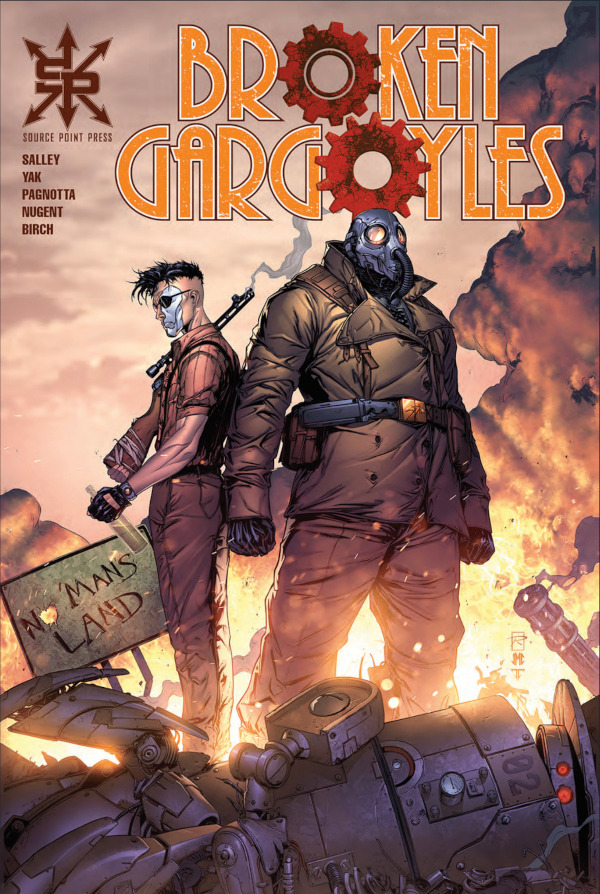 Source Point Press has released the new comic book series Broken Gargoyles onto comic book shelves, physically and digitally. This mini-series follows soldiers as they return home from World War I and restart the lives they left behind, but this title is far from your simple history-based comic book.

Broken Gargoyles takes place in a dieselpunk fueled America, industry is on the rise and prosperous, but the soldiers returning home broken physically and mentally. It’s a time that predates PTSD, but this title leans towards this subject being dissected. The characters are also shown to be on the road to redemption and gain the honor they deserve.

In the debut issue, we meet William. He is having a difficult time regaining a normal life and provide for his family. William navigates the city and tries to figure out the right path, but is reminded of a ghost from his military past. This individual seems to be set on a path of more vengeance, then redemption. The questions could be asked, will these two cross paths? Will it be a peaceful reunion or a warpath?

The creative minds of Broken Gargoyles have set the right pace for this first issue. The story accelerates at the right level and makes the reader ready for the continuing series. The images are great and open for dissection so that the eye can catch every element. This debut of “Broken Gargoyles” is a perfect way to start a franchise.

Joshua Gilmore is the creator and co-host of the Nowhere California podcast. This production made its debut in 2011 and developed a unique take on the pop culture landscape. Nowhere California has evolved into a website (www.nowherecalifornia.com), and a Ghostbusters focused podcast known as “The Ecto Pod.” You can find Joshua on twitter @ThatNowhereJosh.