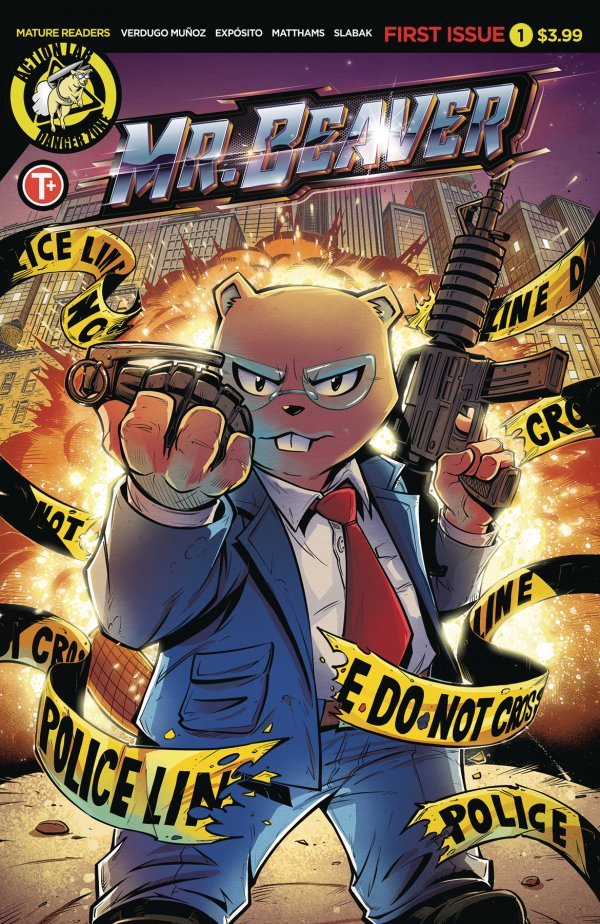 Not since the introduction of the Teenage Mutant Ninja Turtles has an anamorphic animal been so mysterious, so cunning and so deadly! Mr. Beaver isn’t to be messed with, and he kicks some major butt in the first issue of Action Lab Danger Zone’s new series, “Mr. Beaver.”

Detective Kage is a wide-eyed rookie in a city riddled with crime. To help clean up the streets, her boss has enlisted the help of a vigilante who is the best in the business, Special Agent Beaver. Although he doesn’t do partners, he is partnered up with Kage, and they are assigned their first job. A team of armed assailants have taken over Central City Bank, and Mr. Beaver is about to teach them a lesson. But all isn’t as it seems as one of the assailants reveals that he knows much more about Beavers past than anyone should.

Things are off to an intriguing start for this new series. The first issue doesn’t bother with much backstory at all for the characters; it just throws you directly into the story. What little backstory there is doesn’t explain exactly how this beaver came to be. I’m not sure if he’s part of some experiments via Rocket Raccoon or mutated like the aforementioned TMNT. Or maybe walking, talking animals are the norm for this world? Who knows! But to be honest, I never thought about any of that while reading the book; it was just an afterthought.

Created, written, and illustrated by Pablo Verdugo Munoz, Mr. Beaver is a unique spin on the genre. As I was reading the voice-over of Beaver, I had a very specific voice in my head. It was the voice of a classic noir detective, not exactly Phillip Marlow or Sam Spade, but something in that realm. He has a no-nonsense attitude about him; he’s been through some stuff. Detective Kage seems to be the complete opposite, and their partnership will be interesting to follow in upcoming issues.

On top of great characters, the writing and setting are also solid. Munoz immerses you in this exciting, strange, and dark world while not giving too much about it away. It’s still very mysterious, and I hope we see more of it in the future. The action is excellent as well; it’s brutal, bloody, and gritty. I loved it.

When it comes to great noir-inspired stories, Danger Lab Action Zone has been on a roll. On top of the great Spencer & Locke series, this looks like another hit for the indie comics label. Interesting characters, intriguing story, and fun action make this a great read.