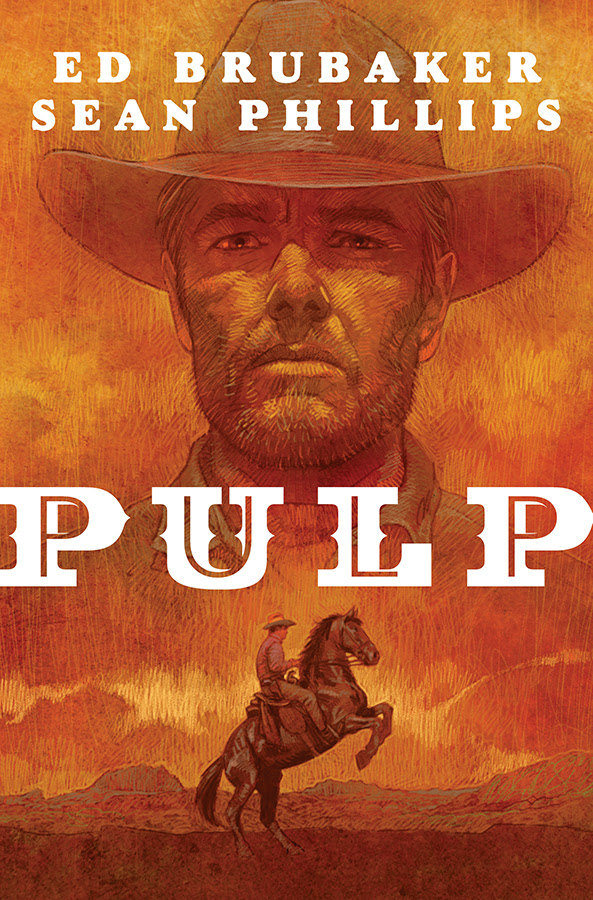 Ed Brubaker and Sean Phillips have created a wealth of amazing stories together, from Criminal, Fatale, and Kill or Be Killed, to name a few. The duo is back with a new graphic novel, one that has been on my radar since the news first broke about it. Let’s take a look at Pulp from Image Comics.

Max Winter writes fictional pulp stories for a magazine in New York in the 1930s. Tales of the forgotten frontier, gunslingers and bandits, and the Red River Kid- a hero in his own right. Only the stories aren’t entirely fictional: they are based on Max’s life in the wild west. But his life starts spiraling down: his job cuts his pay rate down, he gets mugged while trying to help a stranger in need, and has a heart attack. Max starts to think of his mortality and the life he would leave behind for his wife in the event of his untimely death.

We see the parallels between Max’s life now and his life out on the frontier. Through Max’s tales, we learn about what happened in Max’s life, the three times he almost died, and his old habits that he falls back into. We also see someone from Max’s past resurface, but is he friend or foe? Can Max do right by his wife before the sun sets one last time for the old cowboy? What about the invading Nazis in New York? What part do they play in Max’s journey?

Brubaker and Phillips craft an extraordinary tale of redemption, desperation, and self-actualization. Their story of a man who has aged out of his time is gripping, emotional, and frightening. I love Phillips artwork, joined by colors by Jacob Phillips, which is so fitting. From the frontier to the seediness of New York, Phillips captures the essence so well. We get to see how this senior gunslinger transitioned and lives during his twilight years, and his arc so rewarding.

Pulp is a self-contained story that mature readers will be sure to enjoy. Brubaker and Phillips swing for the fences here and nail a grand slam here. A fantastic story, artwork, character arc, presentation, and an ending that will give you chills, Pulp needs to be on your must-read list.