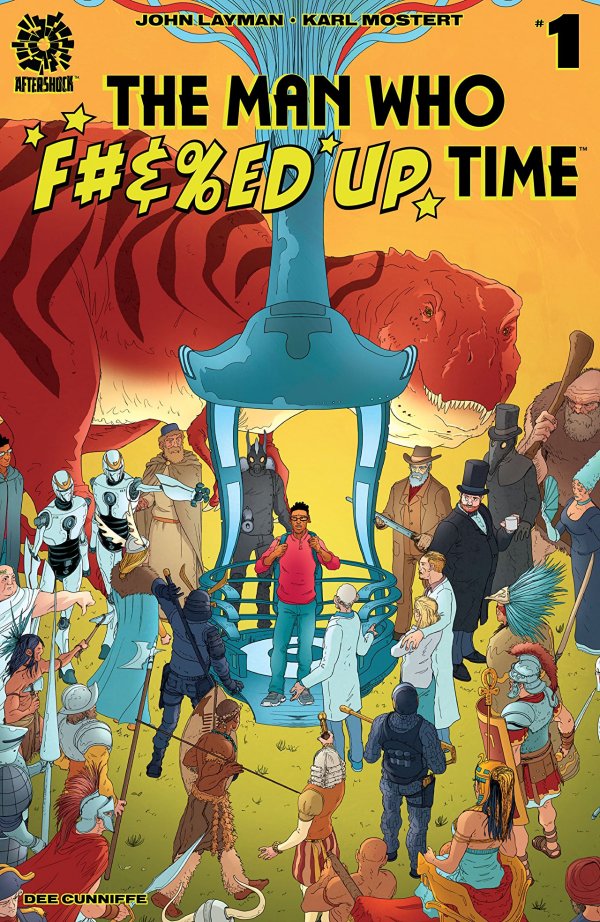 I have been a fan of AfterShock Comics since they first launched, reviewing titles like Rough Riders, Black Eyed Kids, and American Monster. The publisher has a new wave of books hitting, and I am excited to check them out. First up is The Man Who Effed Up Time #1.

From John Layman (Chew) and newcomer Karl Mostert, we get the first installment of a man who does what anyone of us would do given the opportunity: change time just a little. Sean Bennett is a lab assistant where a prototype time machine has just been created. Life hasn’t been the best to Sean- his former roommate, who stole Sean’s girlfriend, is now one of the doctors running the lab- having used Sean’s notes in college to get him where he’s at. Sean had to drop out of school because he couldn’t afford it- life kind of sucks for this guy. So after a talk with himself (literally), Sean decides to go against every rule sci-fi movies have taught us for years, and he goes back in time to make some minor changes a week back. That’s it, just a week back. What he comes back to is a future ran by Emperor Lincoln, who was saved from his infamous assassination, robotic time police, and more.

Layman gives us the tip of the iceberg here with the first issue- we meet Sean, we get the premise, and we see how time goes completely bonkers. The story doesn’t go too deep here, but I bet once we get the next few issues, we will get sucked into it. Mostert’s artwork is crisp and clean, and his designs here look fantastic. My only gripe with the book is that it takes too much time to set everything up and not enough time for us to enjoy the madness caused by Sean’s choices. This is an excellent start to this brand new series, and I look forward to seeing how The Man Who Effed Up Time can really push the time-traveling envelope in the issues to come.