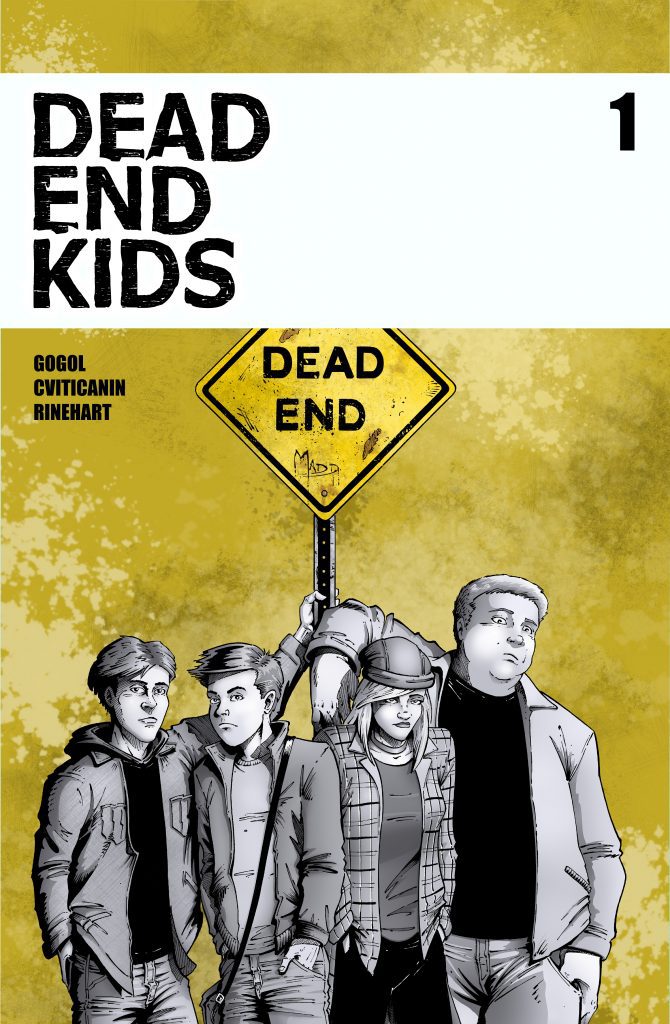 Comic books aren’t all capes and epic battles. They can also be trips down memory lane, friendship, and murder. Welcome to the world of Dead End Kids, from Source Point Press.

The book is written by Frank Gogol, with art by Nenad Cviticanin, and letters by Sean Rinehart, reuniting the team from Grief, also published by Source Point. The book focuses on a group of kids that don’t have the best lives. I think that’s something we can all relate to. Set in the ’90s, the book kicks off on a dark note as one of the kids from our group is dead, floating in the water. But that isn’t a spoiler, because the story here is who killed Ben, who and why?

The book is dark, with something in these kids that will harken back to a simpler, but not so much easier, time. We meet Murphy, Amanda, Tank, and Ben: four kids from different and challenging lives, but with one thing in common: their friendship. It’s their one stable part of their lives, their safe zone. We get to learn about the kids, as well as see some potential suspects on who would have killed Ben.

Gogol crafts an excellent introduction to the story, as we learn about the kids, see what their motive is, and the obstacles that stand in their way. I thoroughly enjoyed the pacing, the character development, and the dialogue, which seems so natural. Cviticanin’s artwork is nicely done and helps set the mood for the story. We get a dreary vibe at times in the book, especially on the final page of the book, and the art makes us care on what happens next to the kids. Rinehart’s lettering is tremendous, as well.

Think of a coming of age story with no guaranteed happy ending: that’s Dead End Kids, and that’s life. I love this book: from the Offspring quote at the beginning that encapsulates the vibe of the story. It’s one of my favorite songs, so I can imagine the dark road Dead End Kids will go down, and I am along for the ride. Make sure to pick this up when it hits shelves because if I were a betting man, I would bet on a sell out once it releases.

Nolan P. Smith is the Editor and Co-Founder of Pastrami Nation. Being a reporter for the past ten years, he has worked for a variety of media outlets, from newsprint to the ever-evolving internet platform. Residing in Victorville, CA, writing has always been a major aspect of his life. You can usually find him at comic book conventions, looking for more amazing books to dive into, or at the gym at odd times of the night. You can follow him on Facebook, Twitter @nolanpsmith, and Instagram @kakooee.