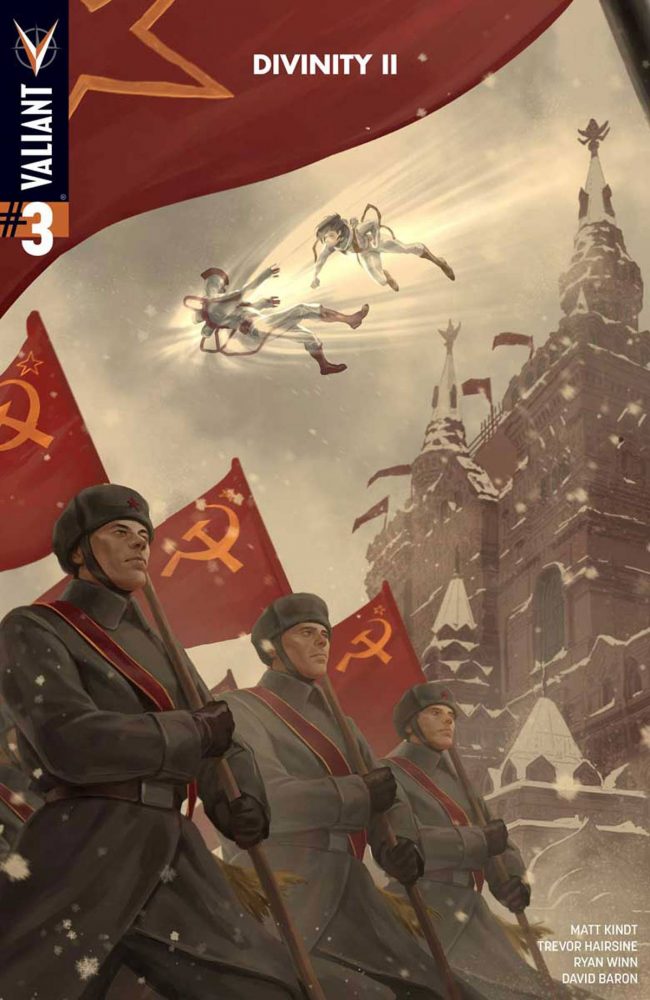 The first Divinity series by Valiant was simply amazing. Having Russian cosmonaut Abram Adams come back to Earth decades later and with the powers of a God was enough to put not only the Valiant Universe on notice, but the comic book industry as well. With Divinity II, we saw that another cosmonaut that traveled with Adams has returned, but Myshka is far more dedicated to the soviet cause than Adams, leading to a titanic tussle.

With this issue, we get a visual feast as the two god like beings battle it out, tearing through time and space as they do so. I was blown away halfway through the book, as seeing Adams and Myshka, two people with similar powers, having two radically different outlooks on the world, battle it out. They literally battle through the pages of time, which is one of the most amazing sequential art sequences I have ever seen.

Matt Kindt and Trevor Hairsine have created a series that is flying under the radar in the midst of rebirths, reboots and wars. Even going toe to toe with Valiant’s 4001 A.D. event, Divinity II is shining brighter than most books on the shelves today. This series, like the one before it, is just such a breath of fresh air, with twist and turns abound. The artwork is something to behold on its own, and to be paired with Kindt’s amazing script, we get a third issue to one of the best series of 2016. If you are only picking up titles from the big two, then please, go pick up the first Divinity collection, and then get the first three issues of this second series. This is comic bookery at its finest (is that a word?).