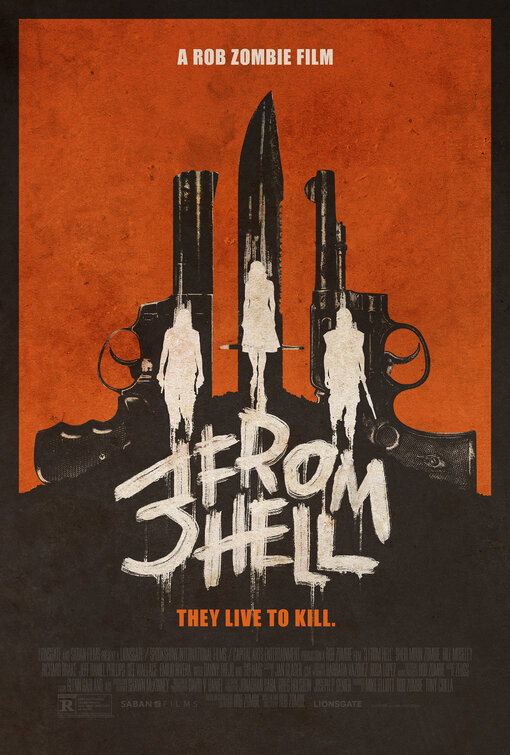 From the twisted mind of Rob Zombie comes the third installment in the disturbing saga of the Firefly family. Starting in 2003 with “House Of 1,000 Corpses” and continuing in “The Devil’s Rejects,” Zombie has continued the story in “3 From Hell”, a captivating, if not conventional (by his standards) horror thriller.

The story picks up not long after the finale of the last film. At the end of “Rejects,” it was all but certain that the story of Otis, Baby, and Captain Spaulding (Bill Moseley, Sheri Moon Zombie, and Sid Haig) had come to an end. But going out in a blaze of police firepower wasn’t in the cards for them, as they somehow survived the showdown. The three are now awaiting the death penalty for their horrible crimes. They build a cult following outside of prison, with many admiring their sins and accepting them as a way to fight the system.

Without spoiling anything, Captain Spaulding isn’t in the picture for very long. While working in a prison chain gang, Otis escapes with the aid of his half brother, Winslow “Foxy” Coltrane (Richard Brake). Soon, the two devise a plan to break their sister Baby out of jail, and the three hit the road to Mexico to find their freedom. But nothing is that simple with the Firefly family; as the body count begins to multiply, they soon find themselves on the radar of a dangerous Mexican gang leader out for revenge.

3 From Hell is a bloody, violent and depraved thriller, which is exactly what I expected it to be. Some directors have a very specific film aesthetic and style, and Zombie is one of those. When you are watching one of his films, there is no denying it. He makes grindhouse films that make you feel dirty while watching them. Everything he does is gritty and he always has a very clear vision in mind. Some people might see the violence and gore a bit excessive, but it is what he does. And while I can’t recommend this movie to everyone because of the gratuitous nature of it, I found myself captivated by the story.

Speaking of story, it was surprising how well this one worked. For a series that fans thought had a definitive ending, it moved on in a very interesting way. Although it was pretty standard fare, I wasn’t sure which direction it was headed. It moved the story forward and cemented itself as an essential chapter in the story of the Firefly family.

The actors have been living with these characters for so long that I often worry about their mental well being. They play them so well that it’s hard to believe they have not become them in one way or another. Sheri Moon’s Baby has been my favorite in the series, and she has so much more to do in this film that previous entries. We get to see her in a different setting than before, and more of her personality comes through. Bill Moseley is fantastic as usual, and it was nice to see Sid Haig again in what turned out to be his final film performance. Newcomer Richard Brake is a welcome addition to the saga; he fits right in with the psychopaths we have come to love.

To be completely honest, this movie will not be for everyone. For fans of Rob Zombie and his work, it is definitely worth a watch. You can currently watch it on Shudder, and it’s available to rent and to buy on Blu-ray and DVD.