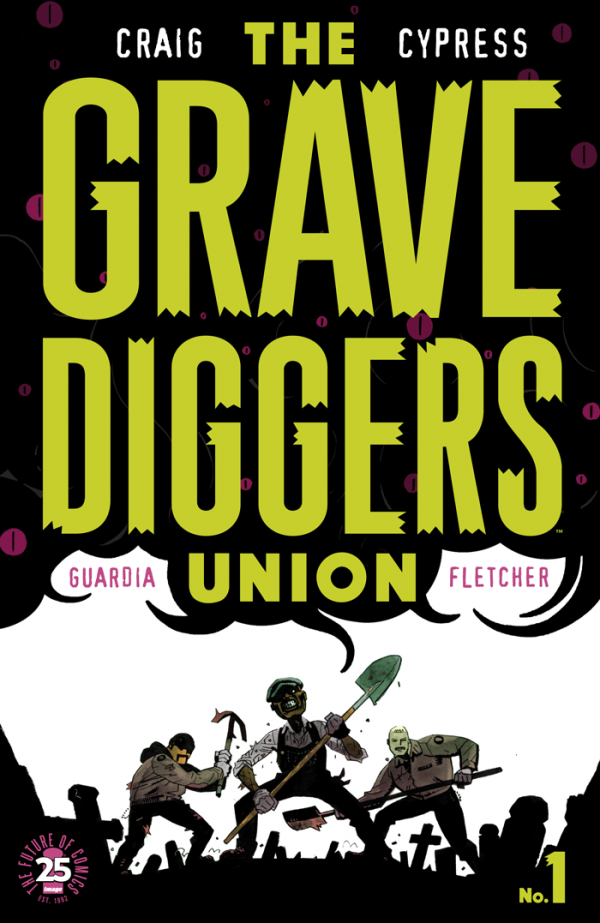 There’s so much to love about this issue, It has everything I look for in a comic and more!

The Gravediggers Union, written by Wes Craig, is superb from start to finish. To start, I love the grittiness of it all. The curse words, the art, the story itself; it all comes together perfectly to give off an amazing and completely original vibe. The story starts off with the gravediggers union, led by our protagonist Cole, up against all sorts of things, from zombies to ghost storms and vampires. This is normal for them, but what’s not normal is just how many of these attacks are popping up. The union then decide to set out on a quest to get to the bottom of things. What I love about the story is the sense of ambiguity throughout, the world seems to be so complex and yet we only know a small amount of what’s going on. It’s ominous, there’s so much that is undoubtedly coming to us in later issues, and this first issue will hook you in just the right way, making you want to keep up with the series.

Another thing that I really enjoyed with this issue was the subtle use of political commentary. It’s not overbearing, but it’s definitely there, and it adds yet another layer to an already complex story. The idea of this small union and all of these supernatural beings that they’re up against might seem like it’s been done before, but I can assure you that it hasn’t been done in this way. It’s definitely a breath of fresh air, and something you’ll want to pick up if you’re interested in immersive storytelling, and an issue with an amazing start to what has the potential to be an amazing series.

Now of course, no comic is complete without it’s art, but this art, done by Toby Cypress and colored by Niko Guardia, fits the story so well. It adds so much depth, and breathes life into the words and the dialogue on the panels. The grittiness of the characters and the world is matched perfectly by the art!

Be sure to check this issue out, you won’t regret it!