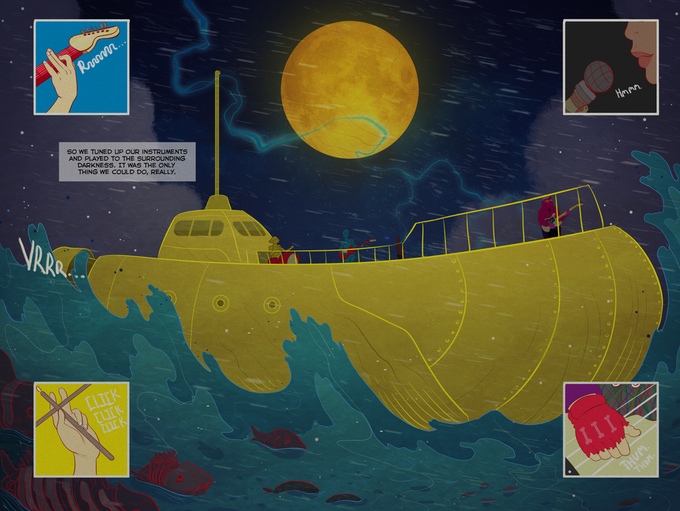 For this installment of “Let’s Kickstart This”, we need an immediate call to action, as this project ends in under TWO HOURS! This project, Silence-Track One, is by someone I spotlighted before- Devin Kraft. Kraft is the creator of Dragon Slayer, an amazing book that also utilized Kickstarter to become a reality. Kraft has a mind for comics, and shows it in an entertaining way.

So, what’s Silence about? Here’s from the Kickstarter page:

Silence is a comic about music and the power it has to hold everything together when the world seems to be falling apart. The story takes place in the music town of Anthem, whose male population continues to dwindle as ships go missing at sea during routine shipping runs. The South Seas Capital Company holds Anthem in a death grip of debt, and many of its employees struggle to keep their houses from being repossessed by the bank.

Johanna Jones, a runaway from the town of Anthem receives a letter from the SSCC informing her that her father has gone missing after The September, the ship he was aboard, failed to return on time. They plan on repossessing her childhood home and allow her several days to collect any important belongings. Johanna reluctantly returns home to try to put together an expedition to search for The September’s whereabouts. Along with her best friend, a washed up elderly ex-punk rocker, an on again off again addict, and a cat named Arpeggio, she sets off on a yellow submarine called the Heart of Gold for Hades’ Hexagon, a mysterious area where ships keep disappearing.

From the creator of Dragon Slayer comes a 40+ page full color comic about the transformative power of music.

The books looks and sounds fantastic, and deserves to see the light of day. Check it out at https://www.kickstarter.com/projects/cheshirecatart/silence-track-one.