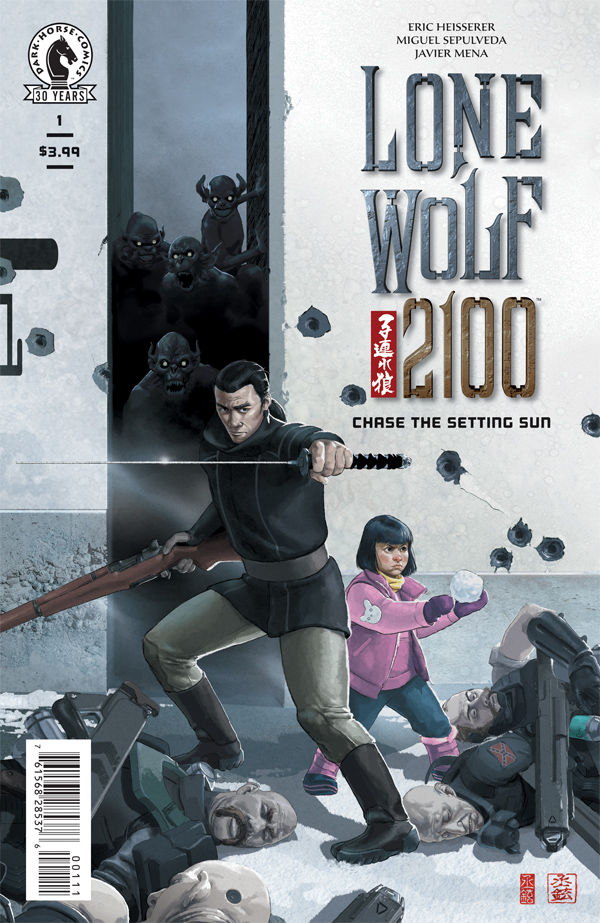 (Victor Valley)—Lone Wolf and Cub is arguably one of the most popular manga released in the United States. Following the adventures of a young samurai and a small child, we saw opponents dispensed in a violent, sword driven manner. With Lone Wolf 2100, the classic tale is transplanted into the year 2100 where a ronin travels with a young girl to ensure her safety. The twist? He’s not a man- he’s an android.

Written by Eric Heisserer (scriptwriter of The Thing reboot among other films) with art by Miguel Sepulveda (Captain Midnight), this is the second foray we have seen into a dystopian future for the Lone Wolf series. A man-made plague is turning humans into bloodthirsty monsters across the globe- but there is hope. The young girl, Daisy, holds the key to the cure inside of her blood, which is why the android Itto is sworn to protect her and deliver her to those that can stop this epidemic. Itto is from a Ronin series of androids, built to combat the infected humans, known as the Thrall. But Itto tries to take a more passive road, but still keeping the young girl safe.

The story has action of out a horror flick, which is fitting from a horror film writer. The essence of Lone Wolf and Cub is alive and well, with a sci-fi/horror romp intertwined. Sepulveda’s art is a great fit for this book- his striking, clean lines pop- especially when set against the night landscape. This is a great read and a terrific start to a futuristic incarnation of the Lone Wolf mythos.