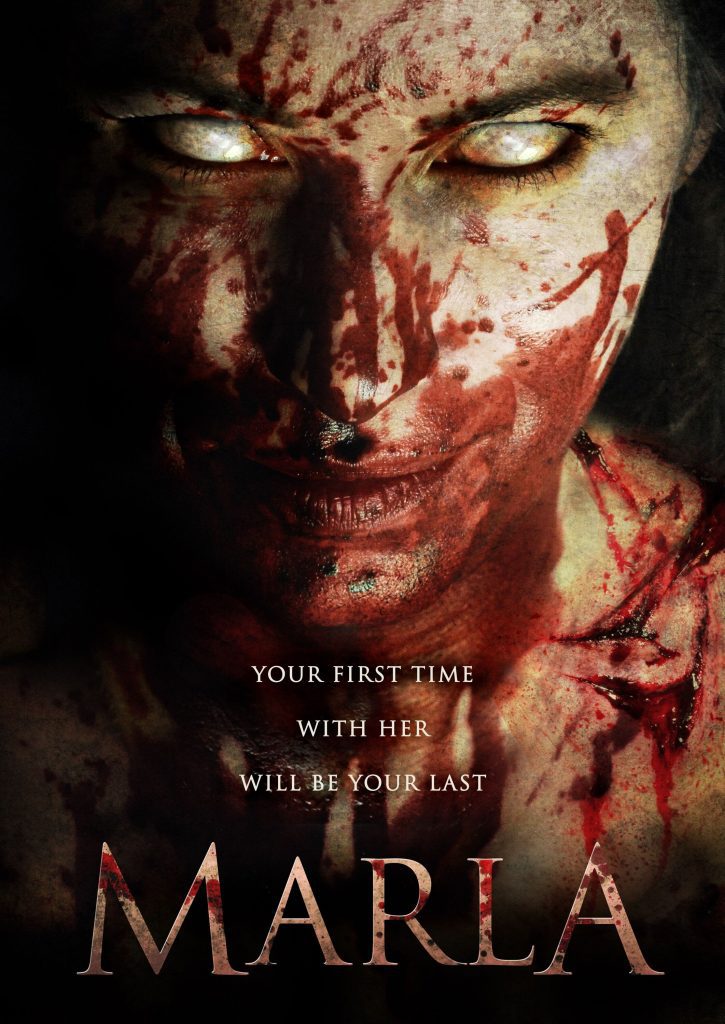 With a tagline like “Your first time with her will be your last,” you can’t help but be intrigued by the new film Marla. Written, Directed, and Starring Lisa Van Dam Bates, it’s part ‘It Follows’ and part ‘Carrie.’ The movie is about Marla, a young woman who gets an IUD implanted by a family friend turned doctor. Things aren’t quite right, though, as she starts to uncover a dangerous secret that has deadly implications for anyone close to her.

Recently, I had the opportunity to speak with Lisa about the movie and her inspirations, among other things. Don’t forget to check out Marla, out on DVD and On-Demand now.

Pastrami Nation: The premise of Marla is interesting and unique. What inspired you to make this film? How did you come up with the idea?

Lisa: I came up with the premise after a particularly uncomfortable Planned Parenthood appointment. It was when I was living in Texas, so the clinic was in this barbed wire fortress. I wore a romper or something, so when they told me to undress from the waist down, I realized that I was going to have to do the appointment completely naked. They gave me a really small piece of paper to use as a “gown” and cover myself, but I accidentally ripped it. When the doctor came in, I was essentially wearing a paper bikini. It was a really uncomfortable appointment, and that scene spiraled into what is now Marla.

PN: I love the cast of the film; everyone does a great job. Besides Marla, Jules has the most interesting role of the movie, and Katie Hemming is fantastic playing her. She gets pulled into the drama but sticks with Marla through it all. What was the most important thing you were looking for when casting her character?

Lisa: Jules’ dynamic with Marla was really important to me. I auditioned a LOT of people for that role. Katie was actually not at all what I was looking for, but I really liked her audition and what she did with the character. Now it’s hard to imagine anybody else playing her.

PN: When it came to casting the lead role, was it always the plan that you would play Marla?

Lisa: A big part of why I wanted to make a movie is that I wanted to try acting. At some point during the writing process I had to let go of that because I was censoring the story based on whether or not I would want to act out certain things. I told myself I’d reevaluate once the script was done. By the time that happened, we were already in preproduction and things just kind of snowballed so I didn’t have time to really think about it much.

PN: As well as starring, you also wrote and directed the film. What was that experience like? What was the main challenge you faced while working in that capacity on the movie?

Lisa: I think that for me, it was kind of natural to do all of those things together. I wrote Marla, so I understand her enough to play her fairly easily. And I think that writing and directing just makes sense—as a writer, directing is the best way to execute the vision you had in your head while writing. I think the most challenging thing was just the learning curve—I had never really been on a film set or written anything or acted or directed before. It was a lot to figure out all at once, but it was really fun too.

PN: Just curious, was it important to you that your first film as a director had a heavy special effects aspect to it?

Lisa: Marla was actually my first time doing FX. It was one of my favorite aspects of filming and part of why I’ve been doing a lot of that type of work since then. From the start, it was really important to me to have a bloody movie, though—I’ve always loved over-the-top practical FX in horror movies, and I didn’t want to skimp out on those.

PN: When the first bloody incident occurs between Marla and her boyfriend Jake, it’s an incredibly tense and scary scene. It’s crazy and shocking in all the best ways, and I’m fascinated with the technical aspects of it. What did you use for the blood and the various body leftovers lying about?

Lisa: I’m so glad you liked it! I won’t tell you my blood recipe—I made all of the blood and guts from scratch, though. The guts dripping on the floor are just chunks of jello with extra pigment added. I wanted them to look like big blood clots. I also built a ribcage that we added to one of the shots to show the cavity of the wound. I made that from a bunch of random supplies from various art and hardware stores. It looked pretty stupid in real life, but once it was covered in blood and framed and lit properly, it worked really well!

PN: Actors such as Sissy Spacek and Bruce Campbell have both spoken about what it’s like to be covered in blood while filming a movie. Throughout this film, you also get that honor. Can you tell me a little bit about what that was like and how it affected your performance?

Lisa: Well, I love fake blood. I’m not sure why, but there’s something that’s really soothing about it for me. It’s not always the most comfortable thing to have on your body—some recipes being better than others. But, I don’t think that the blood affected my performance much, other than the fact that it is enhancing things for the audience.

PN: I read that you filmed this movie in Olympia, Washington. I live in Portland, Oregon, and I love seeing films being made in the Pacific Northwest. Just out of curiosity, are you from Washington? And in your experience, what is the film community like in the area?

Lisa: I was raised in Olympia. There’s actually a pretty good film scene in Seattle! I hear good things about the scene in Portland, as well. I work on lots of fun projects in Seattle, year-round. It’s really cool to see the independent projects that are getting made in this area.

PN: If you can give one piece of advice to amateur filmmakers right now, what would that be?

Lisa: I really enjoy the process of filmmaking, I like learning and improving, and I like the planning and execution. It’s not for everybody, but you won’t know until you try. I think everybody should be getting out there and just attempting their ideas. Your idea will never be perfect; timing will never be perfect. At some point, you just gotta go out there and give it your best effort and make an attempt.

PN: And finally, what are you excited about right now? (What tv shows or movies are you

excited about, what books are you reading, what video games are you playing?)

Lisa: I’ve been a huge slacker about getting caught up on TV and movies right now! I’ve been working a lot and not keeping up with things. I’m working on a new horror feature with a good friend of mine, Jeremy Berg. It’s a Civil War-era story about a soldier with a really serious gut wound and a sociopathic surgeon who becomes obsessed with experimenting on it. I have been playing lots of video games—one of my favorites is Tetris Attack for Super Nintendo. I battle my roommates at that pretty much every day. I play a lot of plain old Tetris too, that always helps me think. I’m reading a really cool book that I like a lot so far—it’s called Something Wicked This Way Comes, it’s by Ray Bradbury. And I’m road-tripping at the moment, so a lot of my entertainment is in podcast form. Some go-tos are Hidden Brain and Science Rules (hosted by Bill Nye). One really great radio show that recently got taken off the air is Off the Hook (hosted by hacker Emanuel Goldstein), I listen to those episodes a lot. It’s actually pretty fucked up – the entire station was taken off the air because of some dispute with the parent company who wants to make more money.