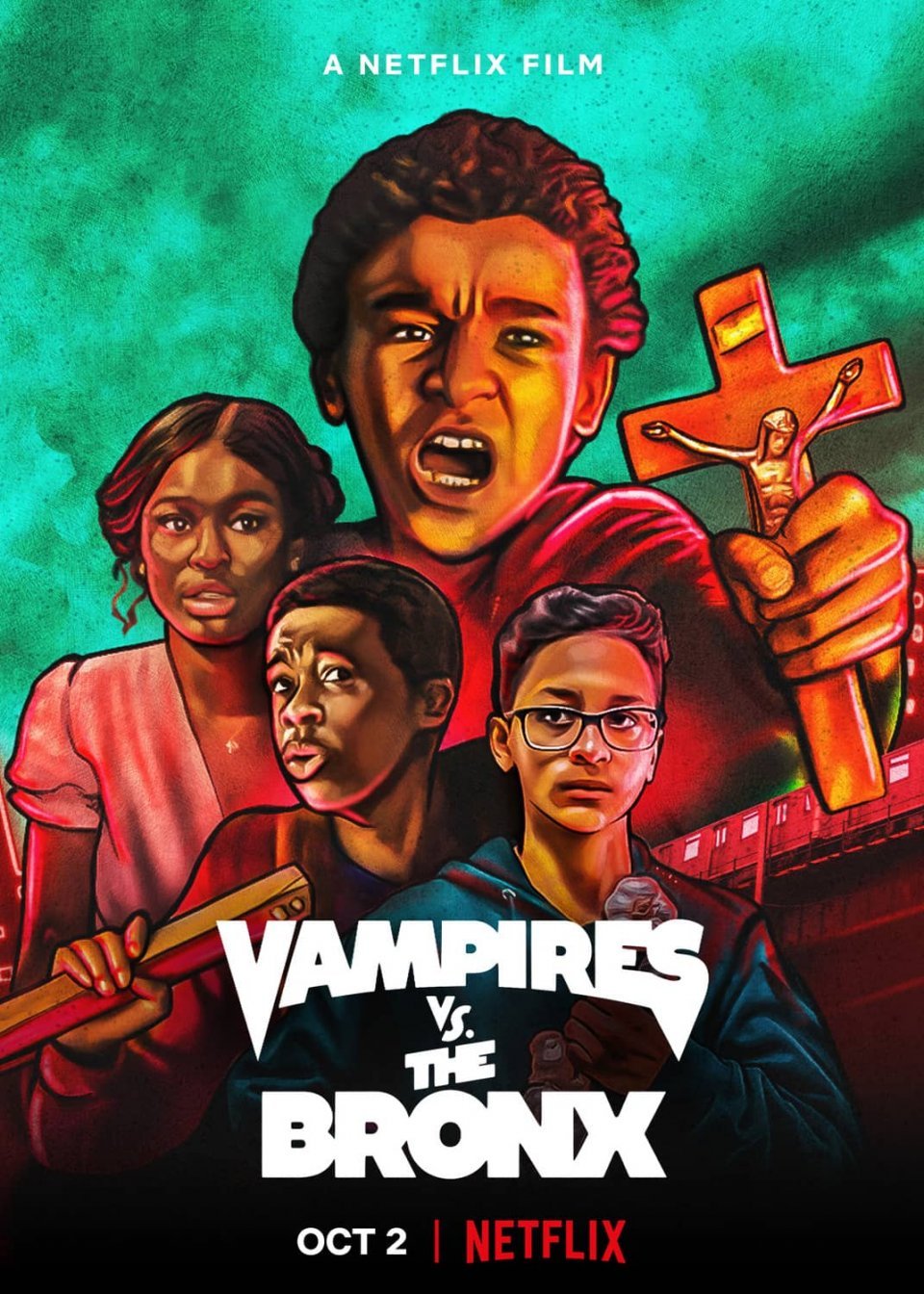 There was something about seeing the Broadway Video logo at the beginning of this film that brought me back to old times. I couldn’t recall right away, but there was something very familiar and comforting about seeing it. After doing some light research, I quickly realized what that logo meant. When I was growing up in the ’90s, films like Wayne’s World, Coneheads, Tommy Boy, and Black Sheep were Broadway Video releases. Those are the films I remember most from that time period, so when I started the new Netflix film Vampires Vs. The Bronx, I was a little bit surprised and excited to see the logo. And while this new film is nothing like the ones previously mentioned, it was a throwback film of sorts and one that is destined to become a classic.

The title of the movie says it all. It’s about a group of teenagers in the Bronx who are forced to protect their neighborhood from a band of bloodthirsty vampires. And while the film is about that on the surface, it’s underneath that facade that it’s about so much more. It’s an extremely relevant film that uses a thrilling vampire tale to shine a light on the very real issue of gentrification and class warfare. The vampires are using a shady real estate front to take over the Bronx by buying out all of the neighborhood buildings. They are disguised as rich real estate agents, and even their construction signs around town show a new and “improved” part of town, one that happens to be very white as well. It’s a vision of their city that the locals do not approve of, but money talks, and people are signing their livelihoods away in hopes for a better future for them and their families.

None of it sits well for Miguel, Bobby, and Luis, though. They can sense something fishy is going on, and they don’t want to see their neighborhood disappear especially the local bodega. Ran by Tony, he was like a father to them. Not able to stand the thought of it being bought out, they organize a block party to save it. It’s this deed that causes the boys to dig deeper into the nefarious real estate firm and discover that there is much more going on than meets the eye.

Directed by Oz Rodriguez (whose previous credits include episodes of Last Man On Earth, Mixed-ish, and A.P. Bio), Vampires vs. the Bronx is a funny, scary and smart thrill ride. I wasn’t exactly sure what to expect going into it, but I was pleasantly surprised with where it took me. Written by Rodriguez and Blaise Hemingway, the script is a love letter to previous vampire stories in the best way possible. When the boys use the film Blade as their reference for how to defeat vampires, you get a better idea of what this movie is going to be. It’s a movie that respects what came before and builds off the formula to create something fresh and new. Much like Shaun of the Dead and Attack the Block, it’s a genre movie first, and the comedy comes from the characters, not the situation itself.

As odd as it sounds, the film felt like a combination of the original 90’s live-action Teenage Mutant Ninja Turtles film and the Underworld series. The way it’s shot, the dark tone, and the family appeal had major TMNT vibes. There is a real sense of danger to it, and it never talks down to its audience. I was only a fan of the first couple of Underworld films, but this movie captured the style and the scary nature of the vampires themselves. I could have compared it to more recent fare such as Stranger Things, but it didn’t seem appropriate. It has many the same dark elements and children in danger themes, but while Stranger Things feels like a modern tribute to the past, this feels like it was made in the past. It’s a different beast, and I’m glad it exists.

This movie would not be able to be as good as it was if it wasn’t for the incredible cast. The leading trio of young actors (Jaden Michael, Gerald W. Jones III, and Gregory Diaz IV) have such fantastic chemistry together that you’d think they have been friends for years in real life. Writer and comedian, The Kid Mero, plays Tony, the bodega owner. Acting as a mentor for the boys over so many years, he is authentically warm and has a huge heart, and Mero brings all of that to the role. It’s his performance that sells the concept that his bodega needs to be saved, and it’s great. Coco Jones, Sarah Gadon, Method Man, Shea Whigham, Jeremie Harris, and Judy Marte are just some of the other notable performances from an excellent ensemble cast.

I really enjoyed my time in the Bronx with these characters. It was an entertaining family horror film with a lot of heart and some hilarious moments. It mixes fictional horror with real-life ones to create something wholly original while feeling comforting and familiar. Vampires vs. the Bronx is a whole lot more than you might have been led to believe, and I highly recommend checking it out, especially around this time of year.