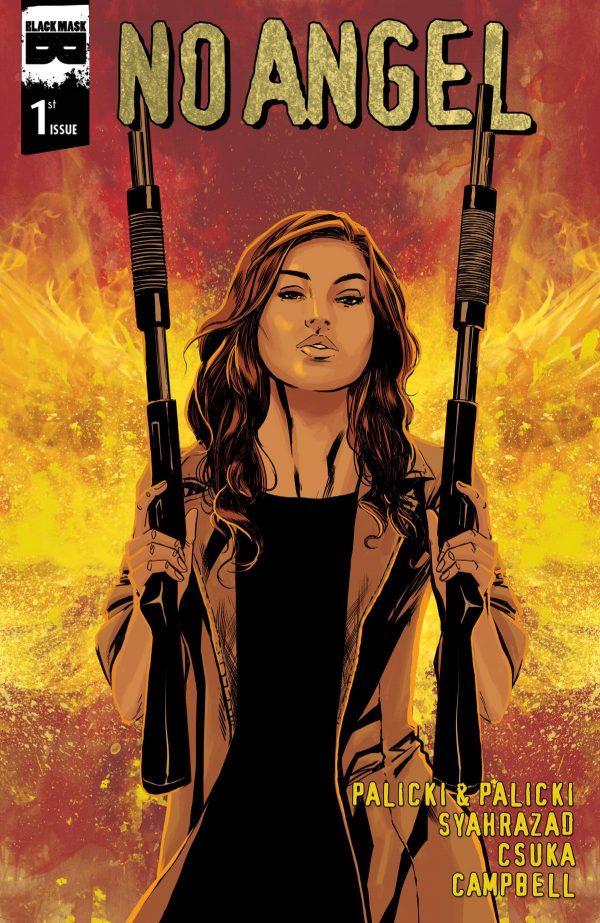 Adrianne Palicki Comes to the World of Comics with No Angel

Black Mask Studio has released some of the most diverse comic series out there. From a psychedelic space faring adventure, to a super powered tragedy filled with romance and danger, to four kids planning on how to rob a bank, this is no set genre when it comes to this studio. With No Angel #1, we get a very gritty, down to Earth story of loss and faith.

From the brother and sister writing team of Eric & Adrianne Palicki, No Angel starts one way and then makes a sharp turn to the supernatural. If the name Palicki sounds familiar, it should: Adrianne Palicki is a well-known actress, best known for her reoccurring role in Marvel’s Agents of S.H.I.E.L.D.   Paired with newcomer artist Ari Syahrazad, the Palicki’s create an outstanding debut. The book focuses on Hannah, a woman caught in the middle of tragedy right from page 1. Her brother and father were murdered, which brings her back to her hometown in Wisconsin. With an estranged mother, a past filled with memories of her time as a Iraqi war soldier, and a pending funeral for her family, Hannah’s life is pretty crazy, but not crazy enough.

Hannah is approached by a woman, informing her of a ‘relationship’ this woman had with Hannah’s father, and gives her a cryptic message: a bible passage. This is where the story spins into the world of angels, demons and more. Hannah gets a glimpse of this when she is attacked by a strange man with strange powers to say the least. The last page shows that this book is bringing a lot more in the coming issues. The feel of this story is very dramatic, very surreal to real life moments, and with a mix of spiritual side of the world, this looks to make for a very entertaining series.

Being Adrienne Palicki’s first foray into comics with her brother, this is an absolute outstanding issue. Syahrazad’s artwork is very gritty, very grounded, which really helps with the tone of the book. I get the same kind of artistic vibe I get from Marvel’s Jessica Jones with this, which is a great comparison to make. No Angel sets the stage for something great, maybe even angelic? I recommend picking it up while you can, its bound to be sold out at stores in the very near future.