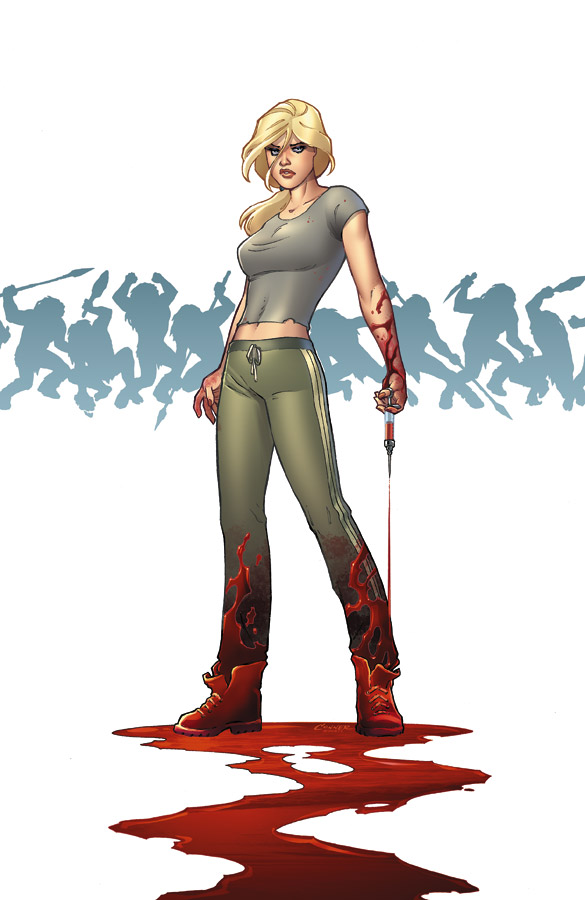 The dream team is at it again.

Jimmy Palmiotti and Justin Gray have worked on some epic books in their time, including the DC Comics/now published under Image Comics Monolith, and it looks like they are up to another hit. Retrovirus, billed as a graphic novella, is a 72 page hardcover that looks to be epic. Check out the official info straight from Image Comics:

Dr. Zoe Wallace, the protagonist of Jimmy Palmiotti’s and Justin Gray’s new graphic novella RETROVIRUS, is one of the best in the field of viral evolution, a brilliant young scientist who attracts the attention of one of the world’s largest and most powerful bio-pharmaceutical corporations. Zoe doesn’t usually use her expertise for profit, but when Bio-Pharm gives her the chance to research a prehistoric virus, she can’t pass up the chance. However, once Zoe is in their Antarctic compound, face-to-face with a perfectly preserved Neanderthal, Bio-Pharm’s secrets may ensure that she never sees the outside world again.

And Zoe has a secret of her own—one that turns her research from theoretical to deeply personal.

“The fun of working on a project like this is looking at the set-up from a point of view like our character Zoe and putting all the pieces, together with her along the way,” said Palmiotti. “With every turn the story gets deeper and deeper and more out of control, and like most of the work Justin and I do together, the challenge is to always keep the characters grounded in the madness around them so the reader can relate to every twist and turn.”

“I always feel the best fiction is propelled by themes, and with Retrovirus there are a number of personal themes that arose in and around the time we began working on this project,” added Gray. “Zoe represents motherhood, survival, determination and our core humanity when presented with terrifying situations. We wanted not only to create a story full of big scary action, but also something people could relate to.”

A science fiction thriller that reaches all the way back to human prehistory and pulls the struggle for existence into the twenty-first century, RETROVIRUS is written by the team that has brought the comics industry CREATOR-OWNED HEROES and QUEEN CRAB and carries on the legacy of comics great Tony DeZuniga with Jonah Hex. Gorgeously rendered by Norberto Fernandez (The Tattered Man) and featuring a cover by Amanda Connor, RETROVIRUS blends human drama with science fiction and action in a story that will make readers think about the survival of our species in a new—and frightening—light.