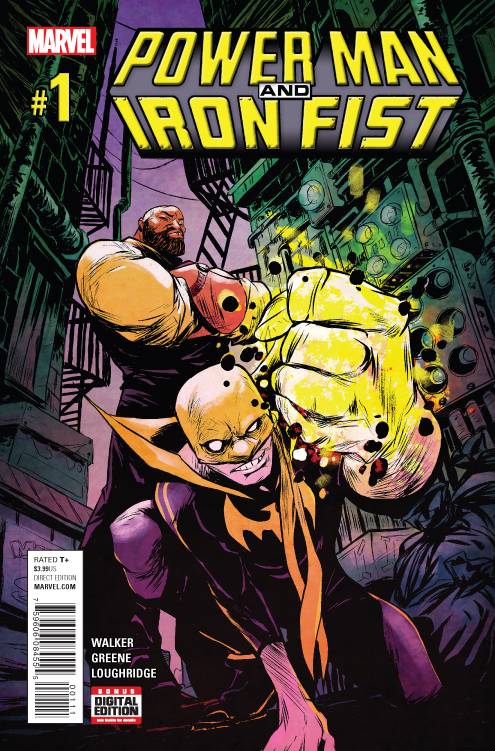 (Victor Valley)—Power Man and Iron Fist #1 is here in 2016. As casual comic book fans now know the name of Luke Cage from the hit Jessica Jones series on Netflix, it’s time they learn about the duo Cage is known for: Power Man and Iron Fist- the Heroes for Hire. Marvel has brought back the two for a new series written by David F. Walker and with art Sanford Greene- and what they create is nothing short of entertaining.

The two heroes have starred in a combo book on and off throughout the years, and both have had series and mini-series devoted to their solo adventures as well. But it’s the chemistry of these two that has always been enjoyable: you have the no-nonsense, former tiara wearing, tough as nails Luke Cage and the living weapon, former slipper wearing, martial arts master Danny Rand- what is not to like here? With the new series, we see the pair partnering up again to help an old friend, which leads to a run in with a familiar Spider-Man villain and a knock down, drag out tussle like only these two can deliver. But again, what makes this book? The heroes.

Walker captures the voices and personalities of these two perfectly: Luke is trying to stay away from the crime fighting life his better half, Jessica Jones, wants him to have no part of, whereas Danny would like nothing better than to be fighting the good fight with his old friend as a Heroes for Hire reunion. The banter between these two, especially the times Luke tries to use alternate swear words, is priceless. These heroes play off each other so well, it would be a crime to have them in separate books.

I was worried about Greene’s artwork when I first saw the cover in the advance solicits- but my worries faded away as I read this issue. The artwork is very fitting for this buddy cop, action adventure thrill ride, and honestly, Luke and Danny haven’t looked this impressive in years. I am partial to Iron Fist rocking the green suit, but with everything that went right in this issue, that is the least of my worries. Luke, while still maintaining the iconic yellow shirt, looks like he is all business here, and not to be messed with.

This was a perfect start to the new adventures of the classic duo. The book was never ending fun, from cover to cover, and I honestly can’t think of a higher compliment for a comic than that. When this team hits the small screen as Iron Fist joins the ranks of Luke, Jessica Jones and Daredevil, we will be in for a treat- let’s just hope it’s half as fun as the story we got right here.