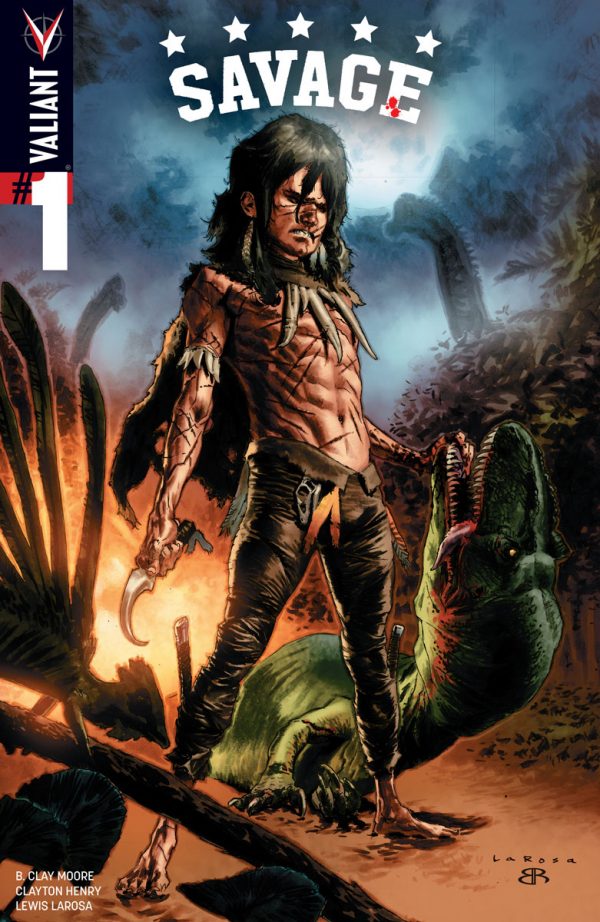 Valiant’s Latest Debut Shows How Savage it Can Be

When Savage was first announced, it reminded me of a former Valiant book which spawned a line of exciting video games: that being Turok: Dinosaur Hunter. When Turok went to Dynamite, I felt the hole that it left, and with Savage, I hoped to have a book that would somewhat fill that need. Now that I have read and re-read the book, I can say that this is the dinosaur goodness I have been missing.

Written by B. Clay Moore (Hawaiian Dick) with art by Lewis LaRosa (Bloodshot Reborn), Clayton Henry (Ivar, Timewalker), and brilliant colors by Brian Reber, Savage #1 opens with what we all want to see- dinosaurs. A lush, beautifully illustrated silent sequence of panels by LaRosa shows a teenager; grizzled, unkempt and ready to fight, throw down with a prehistoric menace in an exciting opening. After that, we get a flashback to the seeming parents of savage looking young man, as we see a young family go down in a plane crash right into the very jungle inhabited by dinosaurs. This portion of the book is by Henry, and is a great contrast to the beginning of the book.

Moore creates a story that doesn’t show a whole lot, but rather leaves clues for readers to connect as we continue to see how a famous soccer player and his family fared on this island, and if this “Savage” is the only person left on the island. The artists here, including the colorists, all knock it out of the park in this Valiant deluxe debut. Everything here looks outstanding, from the dinosaurs to the expressions on the faces of our human characters.

Savage #1 is a grizzly debut that shows that there is new face in town when it comes to a dinosaur battle royal.