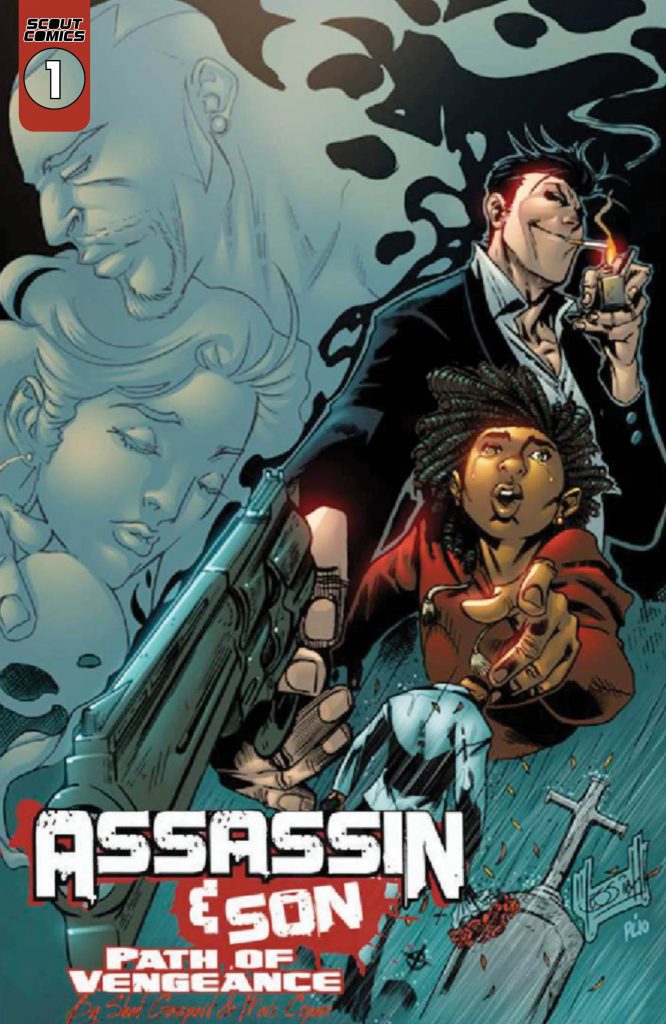 “He just wanted out, but when his old team kills his wife in front of him, an assassin and his son set out on a path of vengeance.”

Scout Comics has sent out word of Assassin & Son: Path of Vengeance- hitting stores in Spring 2020, from former WWE Superstars Shad Gaspard and Marc Copani with art by Eder Messiah.

Here is the official word from Scout on the story:

Set in the dark and gritty streets of New York’s five boroughs, Assassin & Son: Path of Vengeance tells the tale of Donovan Braddock, a one-man killing machine who worked with a team of assassins known as The Horsemen. When Braddock tries to leave his old life behind, his wife is murdered in front of him and his young son. With nothing to live for, but everything to fight for, Braddock and his son seek revenge on the men who took everything, sending them both on an epic journey of revenge and consequence that becomes the Path of Vengeance.

“This project means a lot to Marc and myself,” said Shad Gaspard. “After Marc was let go from the company (WWE), Writing Assassin & Son helped us both find a new career path as writers. I’ve always been a huge fan of Japanese manga as well as classic literature. Plus, I’ve been traveling the world since I was 19 years old, so I was able to come up with unique characters from a multi-cultural perspective. I think fans are going to really like the authenticity of these characters, as well as the badass action on every other page.”

“I’m extremely excited that Scout Comics is breathing life into our epic, action-packed story!”, said Marc Copani. “Assassin & Son is dark and gritty but captures an epic story of hope, too. Shad and I are huge movie fans, so when we got to work on Assassin & Son, we were able to blend all of these diverse stories we were fans of into one pretty kick-ass book!”

“We’re really excited to work with not one but two former WWE Superstars,” said Scout Comics President James Haick. “What’s better than a father and son story? We think fans are in for a real thrill ride when the action-packed Assassin & Son makes its Nonstop! debut in 2020. We love Shad and Marc’s story, and we think everyone else will, too!“

Scout Comics was founded to discover, develop, and support content creators in addition to helping translate their projects to different platforms and mediums. The label has had several breakout hits recently, including Gutt Ghost, Long Lost, The Mall, Midnight Sky, and Stabbity Bunny. To learn more about Scout Comics, please visit them on their Facebook Group: “The Official Scout HQ” or go to their website at www.ScoutComics.com.