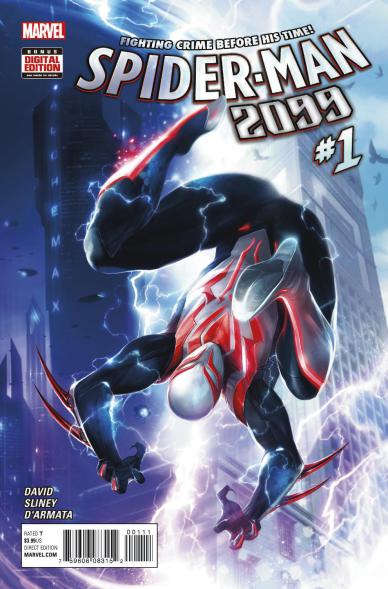 Written by Peter David
Art by Will Sliney

(Victor Valley)—With all the new titles and number one issues hitting right now from Marvel, it is easy to overlook a title here and there. One that should absolutely not be overlooked is the first issue of the new series starting Miguel O’Hara, the Spider-Man from the year 2099.

After going back in time to try and save his future, Miguel was stranded in our time, still trying to find how to save his home in 2099. That brings us to this kick off issue, where Miguel has hung up the webs as his life is pretty good for the moment: he has a high position at Parker Industries (owned by the original Spider-Man, Peter Parker), he has a beautiful girlfriend- he doesn’t need to be the Spider-Man in a time that has plenty of spider men and women running around. We even see one of the coolest sequences seen in a Spider-Man book, as Miguel does what anyone one of us would do if we had Spider-Man’s powers- he runs a course striking similar to the ultra popular Ninja Warrior.

Written by Peter David, one of the co-creators of the Spider-Man 2099 back in 1992, this book is such a joy to read. We see Miguel’s seemingly ‘perfect’ life without the costumed alter ego, a glimpse into what his home time looks like now, and a very surprising ending, leaving us waiting to see what happens next. David, one of my favorite writers, does an excellent job with his return to character he helped bring to life. Artist Will Sliney provides the visuals, and in a book like this, the visuals are a huge factor. From the designs we see on the glimpse of the new 2099 costume, to the facial expressions that tell a thousand words, Sliney is a perfect choice to help bring Miguel and his webs to the forefront of the Spider-Verse.

With all those new #1 issues coming out, I know it can be hard to pick which ones deserve your hard earned cash: take my word for it, Spider-Man 2099 #1 is worth every penny. We have seen that, in the past few years, you can have a different Spider-Man and still have a fun and successful book. This just embodies that idea.

Rating: 5 out of 5- The cliffhanger will give you chills.