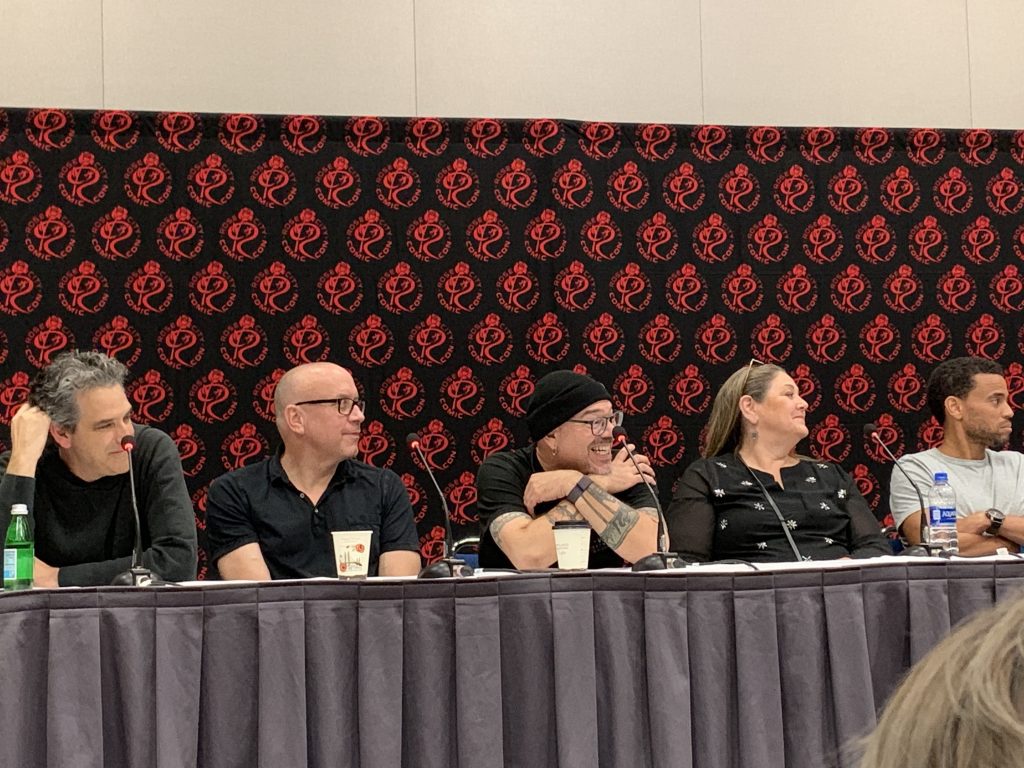 At Rose City Comic Con this year, I was privileged enough to get invited to an exclusive Q & A with the cast and creators of ABC’s Stumptown. It was a fun conversation, and they answered some interesting questions. The panel included Executive Producers Greg Rucka, Jason Richman, and Matt Olmstead, as well as series cast members Michael Ealy, Camryn Manheim, Tantoo Cardinal, Adrian Martinez, and Cole Sibus. Here are some takeaways from that conversation, and a little bit about the show itself.

Stumptown is based off the Oni Comic series of the same name. Greg Rucka created it with art by Matthew Southworth. While it started as a limited series, it later became an ongoing series. The book is a modern-day detective story based in Portland, Oregon. It features Dex Parios, a private detective who does things her way, getting herself into trouble with both the local crime bosses and police department.

As with any adaptation of a novel or comic series, there are bound to be some changes to the source material. While the basic premise stays intact, other things are either expanded on or eliminated to fit within the confines of the new medium it is being presented in. Stumptown is no exception. While the comic series briefly covers Dex’s service in the military, the producers of the show wanted to dive deeper into that part of her life. The first four episodes of the show will do just that, promising to give us a better idea of what makes Dex tick.

There are also other, smaller changes. For example, in the book, one of the main villains is a member of MS 13. One of the first conversations Rucka had with producers was about that, and he completely understood. In today’s world and political climate, it was a logical change to the source material. About the changes in general, Rucka had this to say: “The changes that have been made are all logical, good, additive changes. Jason hasn’t done anything that I’ve seen yet that I’ve been like, ‘that doesn’t fit, that’s not Stumptown.’ It’s all flawlessly Stumptown.”
While the series will stick as close to the books as possible, the producers made it clear that it’s going to be its own thing, while borrowing elements from the comics. The first episode covers the first volume, and going forward; the show will use the rest of the books as inspiration to tell their story in the same capacity.

Comic creator Greg Rucka was deeply influenced by detectives like Thomas Magnum and Jim Rockford for his story, which were all products of their time. Using this as a reference, the producers of the show were asked why now was the time for Dex’s story. “She’s an independent, flawed, honorable woman out there trying to make it work,” they answered. They followed up with saying that her story isn’t one that we often see on television. She isn’t partnered with a male character who can act like a child while she does all the work. And even though she has her flaws, she is a positive inspiration and role model for girls everywhere. On top of that, it’s a show that also features a diverse cast, which lead cast member Adrien Martinez to add, “the goal is to get to the point where no one talks about diversity because it’s the new normal.”

And finally, seeing how the show is based in Portland, the panel was asked about the city, and how much they liked being associated with it. The common consensus was they absolutely love it! The food, the art, the landscapes, everything about it makes them want to come back to film exteriors for the show when they get the opportunity. Creator Greg Rucka also hopes that the show represents the city as much as, if not more than, “Portlandia” has, and shows a different, more realistic side of the city.

Make sure to check out the premiere of Stumptown on ABC, September 25th.