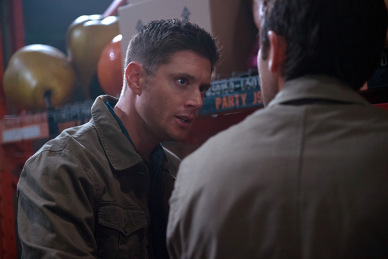 It is three episodes in its newest season, and already the Winchester boys are right where we expect them to be. Secrets are starting to expose themselves and their loyalty to each other is being tested. This is a tried and true formula for the show, which is now in its 11th season, and one that fans expect.

This season started exactly where the last season left off. Dean is finally free of the Mark of Cain, but it came with a price, the darkness. The Darkness, an ancient evil that has laid dormant for years, is now released upon the world, and it’s up to the Winchester boys to stop it. Dean meets Darkness herself, and is told that they share a bond, one that can never be broken. Sam, on the other hand, is kept in the dark about this “bond”, and the two start their path to defeating the Darkness.

Minor Spoilers For this episode.

Rowena (Ruth Conell) is reveling in the defeat of her son Crowley, The King of Hell (Mark A. Sheppard). In her attempt to assemble an all powerful coven of witches, she quickly finds out that her son is still alive, her attempt at his life unsuccessful, and he is most likely going to do whatever it takes to stop her.

Meanwhile, Sam (Jared Padaleki) and Dean (Jensen Ackles) search for her, trying to find a cure for their angelic friend Castiel (Misha Collins), who is still under the ‘attack dog’ spell she cast on him to kill Crowley. They are also on course to find the Metatron (Curtis Armstrong), who may have information about the darkness and how to stop it.

The most interesting thing about this episode is the relationship between Crowley and Amara (Emily Swallow). Crowley sits comfortably in hell taking care of Amara, who happens to be a young girl who is the Darkness incarnate. When she is hungry, he feeds her the souls of the damned. With each soul she devours, she becomes more powerful. It is a father / daughter relationship, one that you can clearly see Crowley is in conflict about. It would seem that he is starting to care for her, but he also fears her, more than God himself. He knows that she is all-powerful, and must be on his side when the ultimate war begins between good and evil. But the question remains, is he just using her to reach his ultimate goal of world domination, or is he actually beginning to grow a bond with her?

Rating: 4 out of 5. This episode is heavy on story, laying the groundwork for what’s to come. Relationships are the focus of this episode, some growing and some being tested. I get the feeling this time that the Winchesters are going to be all right. They have been tested enough, and while there are still trust issues, their bond seems to be getting stronger than ever.