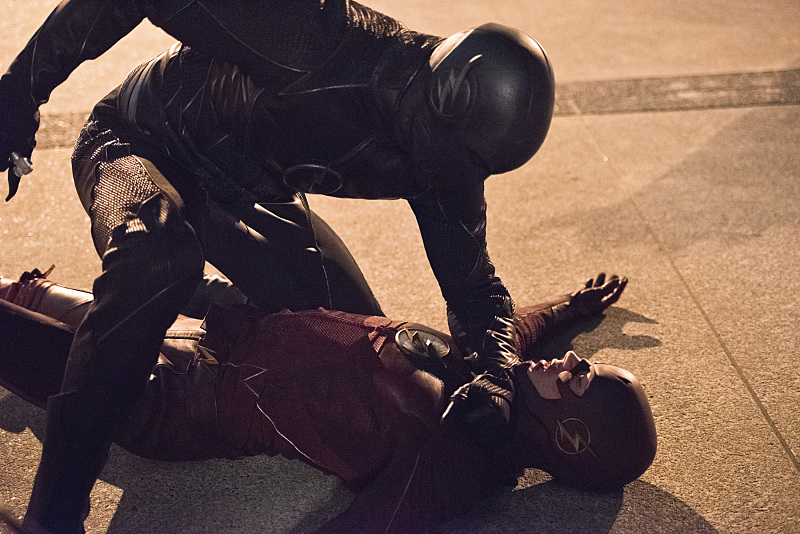 (Victor Valley)—The build up to this episode began with the season’s first episode, when Atom Smasher uttered the name “Zoom”. With a couple “breachers” coming through from Earth-2 all determined to end The Flash’s life, all sent by the mysterious speedster Zoom. This episode, the scarlet speedster comes face to face with Zoom, and it does not disappoint.

For the first half of the episode, we see Barry and the gang try to draw out Zoom by having this world’s Linda Park disguise as Earth-2’s Linda, who is also known as the metahuman Dr. Light. By staging a fight between the fake Dr. Light and the Flash, the hopes are to draw out the evil speedster. But things don’t go as planned, as Zoom shows up when nobody is expecting it and leaves Barry beaten, battered, humiliated and possibly crippled; far worst than the Reverse Flash ever did.

We also get glimpses and vibes into the Earth-2 Dr. Wells, and what motivates him. We see more of his daughter, who we now know is Jesse Quick- for fans of The Flash comic book, we know who Jesse Quick is and what part she might possibly play this season. The interactions between Wells and the Flash gang is priceless, as it seems like Cisco and Wells are like gasoline and fire.

The season keeps getting better and better, and now the question is: who is Zoom? Whoever he is, he is a force to be reckoned with, a force that, as of right now, our hero doesn’t stand a chance against. Another strong episode, The Flash isn’t just winning the race, he’s running the marathon of greatness as well.